IWC just released its latest Top Gun model—a 44 mm x 15.7 mm tougher-than-nails chronograph (£8,550) in a combination of ceramic and scratch-proof, fade-proof Ceratanium (a combination of ceramic and titanium that the Swiss watchmaker began using in 2017 with its Aquatimer Perpetual Calendar Digital Date-Month Edition in 2017). It’s the first all-black model on a military green strap, but it’s more than just a cool accessory that looks like it’s made to match your Tom Cruise-inspired Halloween costume. It’s a bonafide, flight-tested, and fighter-pilot approved piece of technical equipment. Just ask Jim DiMatteo, as a 25-year-long veteran and former Captain of the US Navy who has amassed over 5,000 hours in five different fighter aircraft, he knows a thing or two about the perfect flight companion.

“It’s pretty violent when you fly around in a fighter jet—you’re moving, you’re turning, you’re looking and you’re reaching,” DiMatteo, and IWC ambassador, told Robb Report. “The watch gets smacked against the sides of the canopy and the jet, which is all metal. So it needs to be durable and not get scratched and, of course, there are also a lot of little tiny parts, so if it’s not high-quality then the G-forces will impact that. It doesn’t with the IWC at all.” He also adds that despite modern technology and avionics on the panel of the aircraft, a timepiece is still an essential piece of gear, even today, that is crucial to a mission. The flight itself relies on the modern technology on the panel, but everything else, he says, is right off the wrist. “I have never seen a fighter pilot that doesn’t wear a watch,” said DiMatteo. “I reference mine all the time. It’s critically important that it functions properly, with precision and durability.” 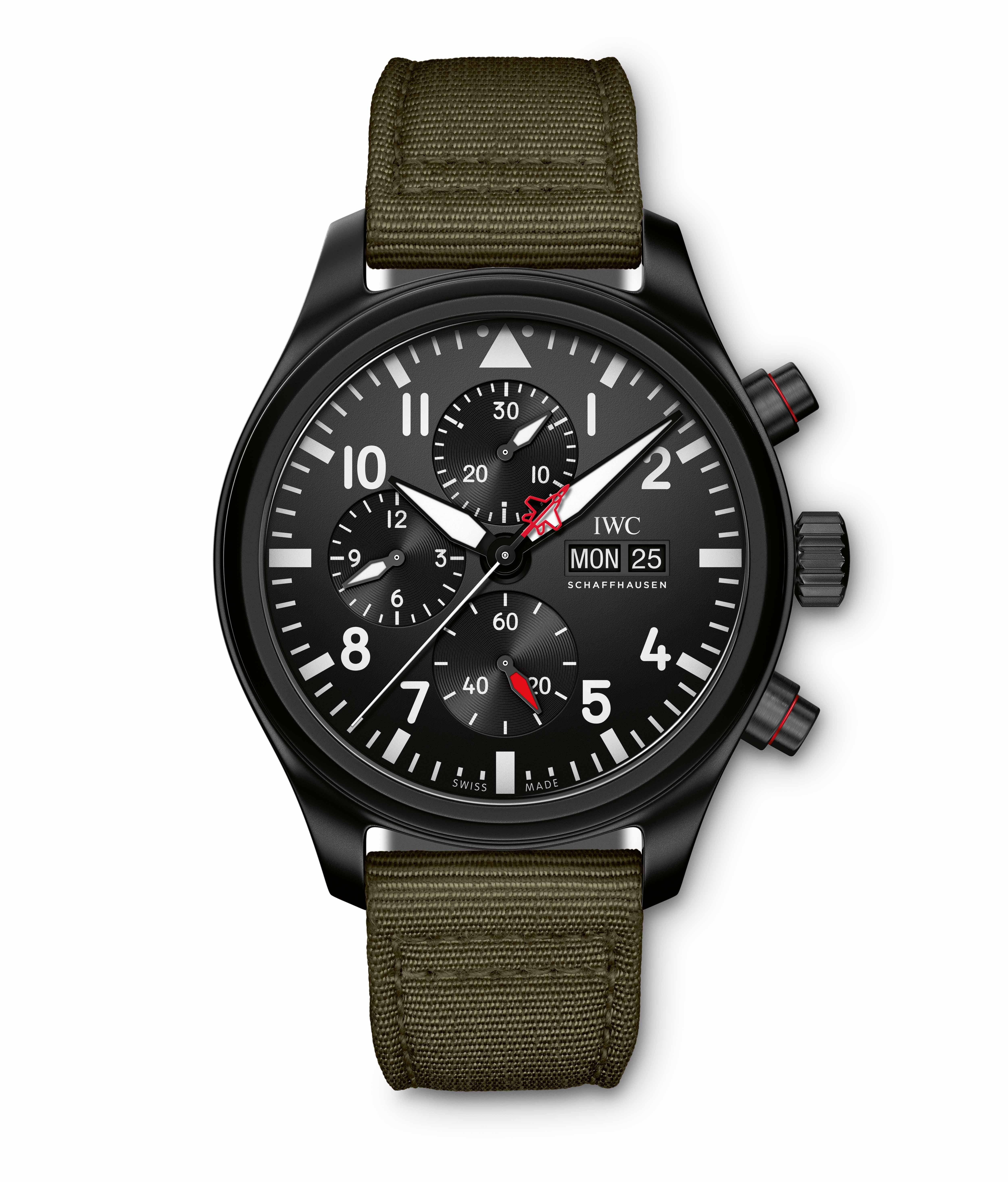 The new Top Gun Chronograph Strike Fighter Tactics Instructor is based on the SFTI chronograph IWC sells exclusively to pilots who have completed the Top Gun programme. “From the day I started at IWC–October 2006, so 14 years ago–I was absolutely determined that we wanted to be a proper part of the Naval Aviation community and build a working relationship with those pilots who are the most qualified pilots in the world with the most flight experience on a day to day basis,” says IWC CEO Christoph Grainger-Herr. The company is the only watchmaker to hold the license for the Top Gun name from the US Navy. The SFTI watches for the Navy Fighter Weapons School’s elite programme come with the Top Gun badge on the dial (mimicking the same badge of honour pilots receive when they graduate from the school).

The new civilian version comes sans patch, but has been juiced up with the same resilient exterior able to withstand the brutality of a fighter jet. DiMatteo says when you’re pulling up to 7 Gs in a jet, just a slight turn of the neck can make your head feel like 100 pounds (he’s flown an F/18 Super Hornet at 7.57 Gs and an F/16 at 9 Gs and has lost two inches in height due to the effects of the force). “There are so many tiny, tiny pieces in a watch and I can’t get my head around how I can pull 7 Gs and it makes my head feel likes it’s going to explode and yet, these tiny pieces still work in those conditions,” he says.  When he was younger DiMatteo used to wear a G-Shock, but it got annihilated in the air. “It wouldn’t work, so you saw the impact of what you’re doing in a cockpit. That’s why it blows me away that this one works so well in such extreme conditions.”

IWC’s heritage is also a source of pride for the fighter pilots. “We stand on the shoulders of the giants that came before us,” says DiMatteo. “Our icons are the WWII fighter pilots, so history, heritage and legacy are really important to us. What’s really authentic and credible with IWC is that they’ve been doing this for 80 years. Their history with aviation dates back to the 1930s and that’s important. We wouldn’t want anyone to take away from our own brand that our forefathers built and they were genuinely a part of this evolution.”

While we have you, Jim DiMatteo, how accurate was the film, Top Gun:

Singing in bars, does that happen?
“The singing in bars is accurate. They stole that from us. I’ve been fortunate enough to be part of the second movie (Top Gun: Maverick) and the producers, directors and Tom Cruise came to the squadron space and interacted and talked to the people. Back in the first movie there was a lot of what they call “colour”—they saw the guys singing to the girl in the bar and they saw the rough and tough and the cigar smoking. There were a lot of real-life characters back then, so they didn’t really have to create anything. Now, one of Tom Cruise’s reactions was that the younger kids today are a lot more politically correct. So it was kind of interesting to hear them ask where they could add “colour” into their personalities and not offend the Navy, because the Navy has to be on board with this whole thing.”

And how truthful are the flight scenes?
“The competitiveness to be the best of the best is very much there. The flying scenes that you see in the first movie were very accurate and aggressive. The moving back and forth and the dogfighting and the physical drain on the body is really there. One of the reasons Tom Cruise did not want to do a green screen in the new film is because he wanted to see that facial distortion and the real-life depiction of fighting to not pass out in the air. It’s authentic.”

The missions?
“Some of the Hollywood stuff, like when Maverick, who is this super stud, flies over to the other side of the world to deal with a problem is not accurate. What we do from a naval aviation perspective is that you train people to have a certain ability or capacity and then they’re where they are, and if something happens, they handle it. We don’t fly somebody in to handle that.”

Clearly, the danger zone is real…
“The dangers, like Goose dying, sadly, is very accurate. A certain amount of fear is good. Our bravado and our machismo approach to this is supposed to be, ‘I’m not afraid of anything. We’re fighter pilots we can handle it.’ That’s not necessarily true. It’s healthy to have fear, but not so much fear that you’re paralysed. You try to elevate your performance with the perceived risk of the mission. It’s good fear though because it dials you up. The feeling you get is the same feeling you have before you go on stage to give a speech. You have those butterflies.”