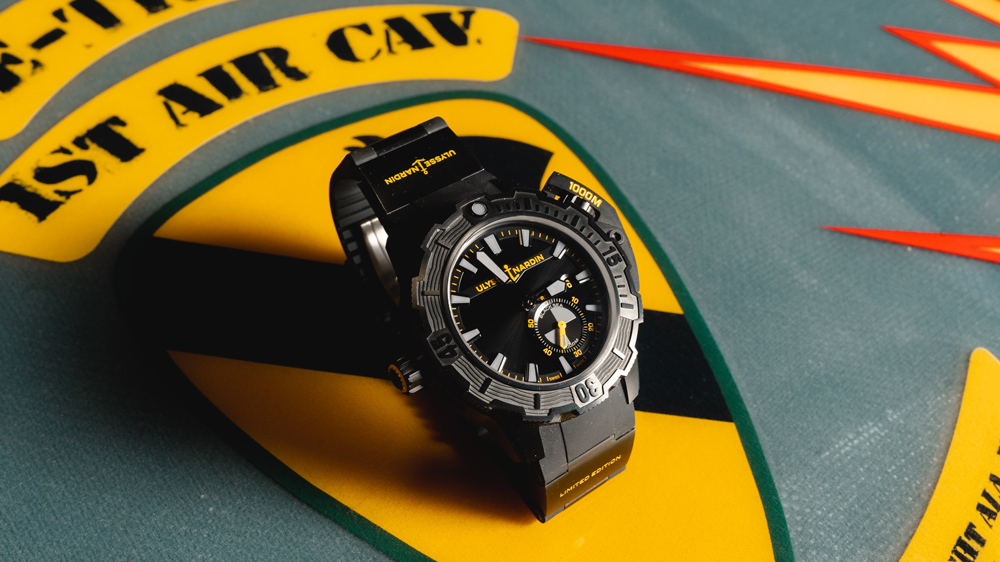 “When I joined the Navy in 1999, I was hoping to see a lot of action in the water,” said former Navy Seal Kyle Beckett. “The irony is that most of the action I saw was on sand.”

It’s fitting then that Beckett is now leading One More Wave, the non-profit he founded in 2015 to help wounded veterans hit the water and ride the waves on custom-fit surfboards. It’s proved to be so therapeutic for vets, Beckett says local Veterans Association centers around the country are actually starting to prescribe it. “Our need has dramatically been increasing over the last two quarters,” Beckett told the press. “Last month alone we had 57 applications. A custom suite of equipment for a veteran runs around £2000, so our needs are really rising.”

Kyle Beckett of One More Wave Courtesy of Ulysses Nardin

Enter Ulysse Nardin: The watchmaker has donated an undisclosed amount to One More Wave, and to announce its commitment the brand has created the new Diver Deep Dive “One More Wave” (around £11,000), a new blacked-out version of its Diver Deep Dive in DLC-coated Titanium.

“A lot of people don’t know this, but Navy Seals are amateur connoisseurs of watches because you change your watch for every deployment,” says Beckett. “We’re always looking for something durable, so when they said they wanted something MilSpec, I said, ‘Well, you’ve got to do something that’s extremely durable.’ I wanted something that was in Titanium and was black, that could be dragged through the ocean and taken diving. Yellow was my favorite colour, so I wanted that for the markers.”

The latter also happens to be a lot more visible than the army green markers originally intended for the watch. The timepiece is resistant to 1000 meters (3,280 feet) and comes engraved with “One More Wave” on the caseback. At 46mm, this is a big watch that’s ready for active duty.

The boards created by One More Wave are about as tough as the watch. “We might custom reinforce a deck with an aluminium-infused glass or carbon fibre for a veteran that has an amputation, so they’re not punching through the deck with their prosthetic,” says Beckett. “They can be really hard on the boards.” The organisation even goes so far as to make custom wetsuits and leashes for the veterans.

“We’ve got one guy who is a double amputee and what he does is put these caps on the end of his femurs and he’ll ride on top of them,” says Beckett. “So we gave his board a little bit of a rise so that his leg doesn’t fly off the side.”

This watch was conceived over burgers and beer in a local Navy Seal dive bar, Danny’s, near the Seals’ training and operations hub in San Diego.

“We were in the bar—Jean-Christophe Sebatier, our product director, was there and is also a fan of what these guys are doing,” said François-Xavier Hotier, Ulysse Nardin’s North American brand president. “There were five other active-duty Navy Seals we were showing our watch designs to. When they saw the Deep Dive they said, ‘Oh, this is the watch.’”

This is just the latest chapter in Ulysee Nardin’s long history with the U.S. Navy. In 1905, when the company won a competition for the most accurate marine chronometer, it was tipped to become the military branch’s official supplier. But Hotier says this partnership isn’t really about the watch so much as it is about supporting the veterans.

“My grandfather was disabled in Indochina during Vietnam before the Americans took over in ’54,” says Hotier. “My other grandfather was a doctor and also a colonel in the army and I went to a military academy myself, so I’m very connected to this and I realised we could do something. The watches? OK, we did a watch, but what we really want to do is help these guys.”