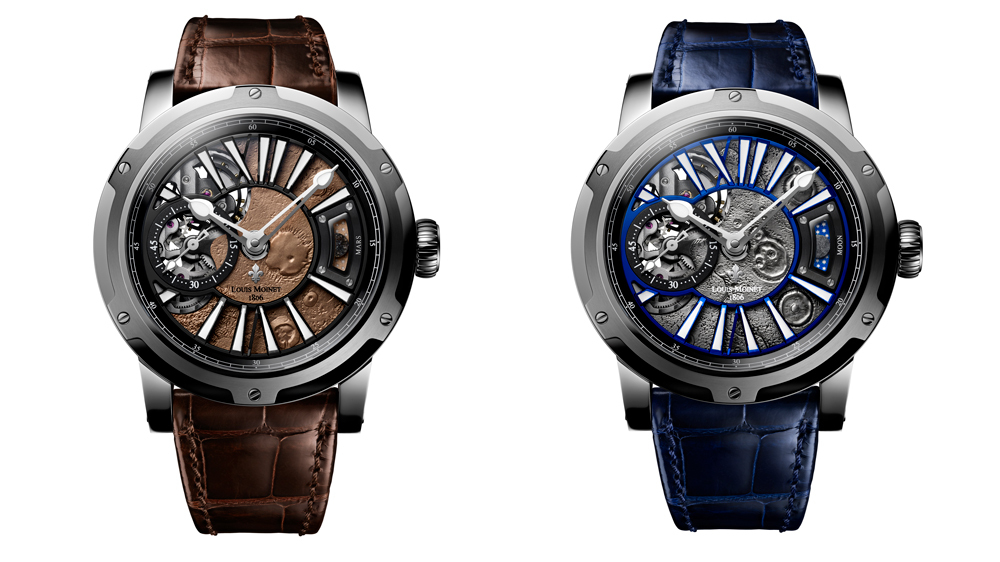 In addition to being a master watchmaker, the 18th-century scholar, painter, sculptor and teacher Louis Moinet was an astronomer whose fascination with the cosmos inspired his most famous invention, the chronograph. That explains why the contemporary Swiss watch brand that borrows his name is equally devoted to the heavens.

Exhibit A: The brand’s two newest timepieces, Moon and Mars, take Louis Moinet’s obsession with the night sky to stellar new heights. Twin versions of the same basic model, both limited editions, incorporate fragments of their respective heavenly bodies on their dials and in special presentation boxes.

“To do so, we’re working with Luc Labenne, the most famous meteorite hunter in the world,” says Jean-Marie Schaller, CEO and creative director of Ateliers Louis Moinet, which was founded in the Swiss canton of Neuchâtel in 2004. “Cutting these fragments is a very delicate task, and mistakes are unthinkable: They’re extremely rare finds on the Earth’s surface. Seeing and holding these tiny slivers of Mars or the Moon is like having your very own piece of eternity on your wrist—a quirky ticket to an interstellar journey.”

The Moon watch, a release of 12 pieces in rose gold and 60 in steel (around £34,500 and £12,700 respectively), takes its inspiration from Around the Moon, Jules Verne’s fictional journey to Earth’s satellite. A capsule containing a fragment of a lunar meteorite sits at the 3 o’clock position against a brass dial designed to mimic the surface of the moon with its signature craters, Gassendi, Tycho and Cassini.

The timepiece offers a fine example of openwork, thanks to cutouts on the dial that reveal the movement, including the escapement and offset hands, all enshrined in a 43.2 mm Neo case distinguished by two vertical bridges.

The Mars watch, also to be released as 12 pieces in rose gold and 60 in steel (also priced at around £34,500 and £12,700 respectively), takes its cues from the work of American astronomer and mathematician Percival Lowell, whose (ultimately disproven) conviction that Mars was crisscrossed by canals fuelled public interest in the Red Planet.

At 3 o’clock, a capsule of a genuine Martian meteorite fragment sits upon a brass dial that reproduces the surface of Mars, complete with its iconic volcanoes, Olympus Mons, Ascraeus Mons, Pavonis Mons and Arsia Mons. Like its Moon counterpart, the watch features an openworked dial that offers an unobstructed view of the movement.

Both pieces, available in mid-March, come in exclusive presentation cases designed in the style of a leather-bound first-edition book from the 19th century—and each one contains a shard of lunar or Martian meteorite.