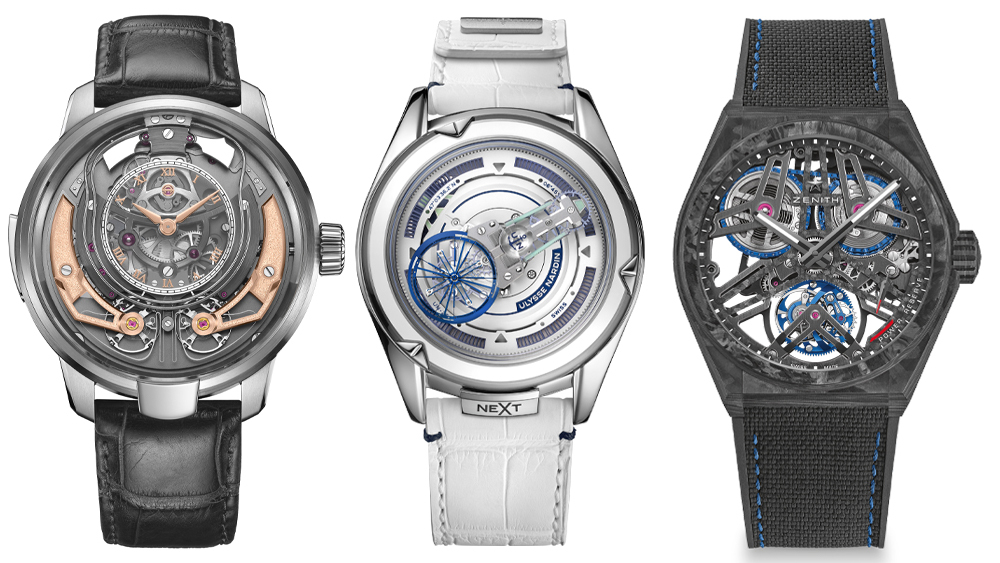 At the high end of the watch industry, it’s typical for R&D teams to flex new ways of working with centuries-old innovations. Creating an entirely new system for telling time, however, does not occur with frequency. When Ulysse Nardin debuted its Freak in 2001, it was, as its name suggests, way outside the norm. Not only did it operate without hands or a crown, but it was also the first mechanical wristwatch to use silicon components—improving both weight and accuracy. The watch indicated the time through the rotation of a baguette (or linear) movement front-and-centre on the dial, with a Super-LumiNova indicator at the tip, showing the minutes, while the hours are indicated by a Super-LumiNova index placed directly in the barrel.

It has since spawned more than a dozen iterations. The latest, initially a concept watch when it was unveiled in March, has now been released in a very limited run of 12. You might need a tech manual to fully dive into the nuances of its mechanics, but the highlights are an array of components made entirely of silicon: a 3-D flying oscillator that appears to float due to its lack of balance staff, Going Train wheels and a constant force escapement. It also boasts a highly precise frequency of 12 hertz with a power reserve of 70 hours (a 30 percent increase over the other models). “The axis is the main source for the loss of energy—since there is no axis, the quality factor has been improved a lot,” says Stéphane Von Gunten, head of research and innovation at Ulysse Nardin, who has been developing this watch for about 11 years. “It oscillates for a very long time without energy. It works in the flat or vertical position of the watch.”

Kicking it into action is the so-called “Grinder,” an automatic winding system that uses an oscillating weight connected to a circle with four pawls that engage a barrel in the watch’s center to wind the mainspring—allowing the timepiece to be wound in both directions.

To top it off, in a brilliant design touch, its Millennium Falcon-mimicking oscillator and four small glass tubes contain green Super-LumiNova that glow in the dark to illuminate the wrist with what looks like a spaceship with laser beams. The bezel also lights up thanks to the material.

May the Freak be with you.

Early examples of the fusée-and-chain were first seen in watchmaking as early as the 15th century—and in drawings by Italian masterminds Filippo Brunelleschi and Leonardo da Vinci. But the mechanism became mostly unnecessary in the 17th century when the pendulum and balance spring were invented. Nevertheless, the device—a spiralled chain that wraps around a conical part to compensate for the loss of torque in the mainspring—was used well into the early 20th century, specifically in marine chronometers, and is alive and well today in Zenith’s new Defy Fusée Tourbillon.

The fusée-and-chain is a rarity; it’s complex and difficult to produce and, therefore, time-consuming. The chain alone required 575 individually hand-assembled components. That’s more parts than the entire movement of some minute repeaters. Taking its bragging rights one step further, Zenith decorated the chain and the tourbillon in a blued finish, skeletonised the watch and then encapsulated the 500-year-old invention in a 44 mm case and dial made from watchmaking’s most modern material—carbon.

The 13th-century Zytglogge clocktower in Bern, Switzerland, was the inspiration for Armin Strom’s new minute repeater, which incorporates the resonance mechanism—an invention dating back three centuries that has become the brand’s calling card. But, housed in titanium and designed with the gongs and hammers of the minute repeater prominently visible on the dial side, this watch is anything but old-fashioned.

First discovered by Dutch scientist Christiaan Huygens in the 17th century, the effect of resonance occurred in pendulum clocks that synchronised when hung on the same plane. Antide Janvier would make the first double pendulum clock with the technology, and about 20 years later Abraham-Louis Breguet invented the resonance pocket watch to improve accuracy. It wasn’t until 2000 that F.P. Journe became the first to use it in a wristwatch. To date, only F.P. Journe, Haldimann and Armin Strom make resonance watches with two separate movements. This one, however, is the only resonance watch with a minute repeater complication in existence.