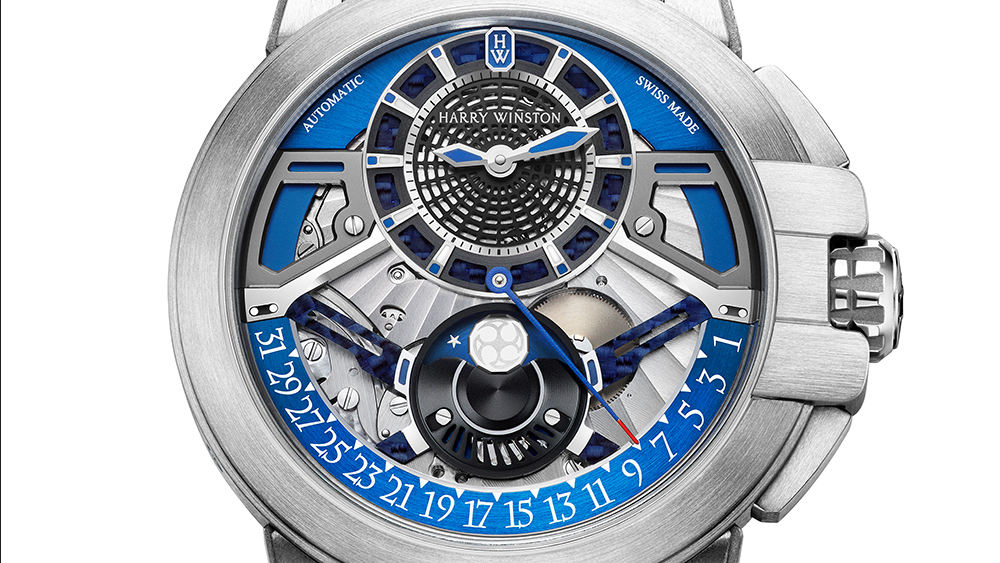 When Harry Winston‘s R&D department embarked on what it calls Project Z in 2004, there were only a handful of brands investing in and experimenting with new case materials. The result of the company’s quest for a something less prone to scratching than gold and steel was Zalium, a zirconium-aluminum alloy similar to a zirconium-based material used in aeronautical engineering. The material is hypo-allergenic, corrosion-resistant and extremely hard—but it’s also remarkably lightweight when compared to steel and gold.

The first Project Z watch was also innovative in terms of design, turning heads at a time when off-centre dials and unconventional methods of telling time were only just emerging as an alternative to traditional design codes. Now, with Project Z13 (the 13th model in the series), the timepieces in this line remain steadfastly unconventional at a time when vintage minimalism dominates watch design.

The architectural, openworked dial is dominated by grey and blue bridges that support the hour and minute subdial at 12 o’clock and the moon phase display at 6 o’clock. The four bridges that hold the moon phase cover are made of carbon, as is the blue ring around the outer dial that functions on the lower half as a retrograde date scale. The moon phase, the first in the Project Z series, is designed as a stylized Shuriken symbol, a signature motif of the series. The Shuriken is a circular knife-like Japanese weapon that literally translates to “hidden hand blade” and was traditionally part of a samurai’s arsenal. The retrograde display and its particular shade of blue, are signatures of the Z series models.

The Project Z13 contains the automatic caliber HW3202, with a silicon balance spring and a 68-hour power reserve. The rubber strap is rubber and calfskin with an embossed Shuriken, blue stitching to match the accents on the dial and a buckle made of Zalium. It is a limited series of 300 pieces, priced at around £18,400.