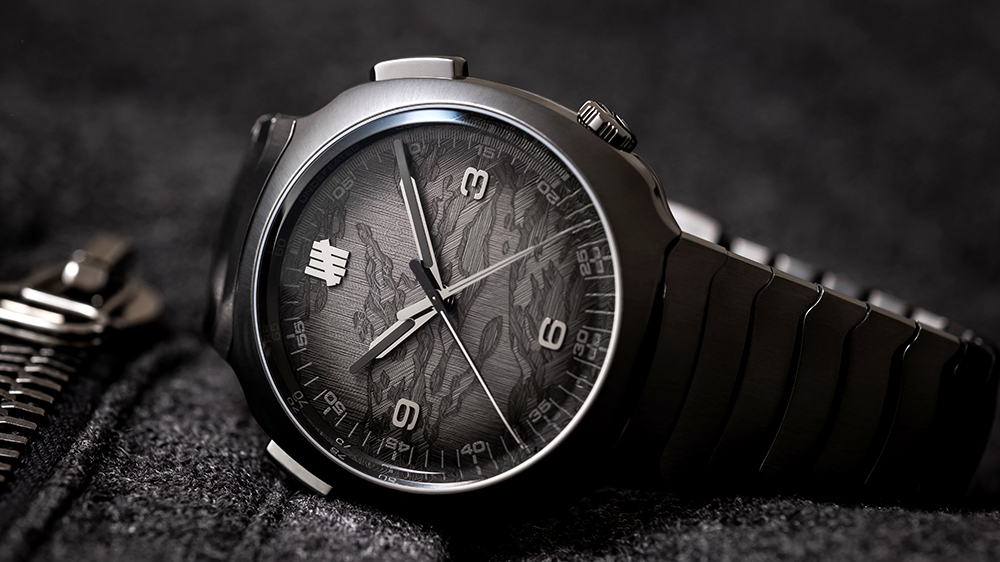 Made in collaboration with Los Angeles-based sportswear label Undefeated, the 42.3 mm timepiece is built around themes of victory and virtue. It also gives a nod to the brand’s mantra based on street culture: “Play Dirty”. Dubbed the Streamliner Chronograph Undefeated, it’s the first watch from the brand’s now four-piece Streamliner series that features dark gray DLC-treated steel on its cushion case and integrated bracelet links.

A closer look reveals a Black Tiger Camo fumé dial, a motif of Undefeated’s work, which is engraved first then given several coats of lacquer to create its stealthy color. The sportwear brand’s logo is also showcased at 12 o’clock, while H. Moser’s name is presented in a discreet light grey underneath. To tie it all together, a finish is applied on top of the lacquer to give it signature H. Moser and Cie’s gradient effect.

The idea for the collaborative timepiece came from Eric Cheng, one of Undefeated’s co-owners and an avid H. Moser & Cie collector who contacted the watch brand’s CEO, Edouard Meylan, himself. After the project was picked up, the manufacturer focused on proportioning, fluid forms and high-end finishes for the piece. Similar to the earlier models in the series, the Streamliner Chronograph Undefeated boasts round curves that mirror the first high-speed trains from the 1920s and 1930s, which serve as the watch’s namesake and inspiration.

Other notable features include separate tracks for the elapsed seconds and minutes. The hour and minute hands are formed from two sections and feature inserts made from anthracite gray Globolight, a ceramic-based material that contains Super-LumiNova.

As for this special edition’s movement, the piece is equipped with the Calibre HMC 902. It was developed jointly by Geneva-based watchmaker Agenhor and H. Moser & Cie with a frequency of 21,000 vph, bi-directional winding, a tungsten oscillating weight, as well as a column-wheel chronograph and a two-stage chronograph mechanism. Composed of 434 components, the movement delivers a minimum power reserve of 54 hours. Be sure to flip the watch over to get a view of its movement through the transparent case back.

The Streamliner Chronograph Undefeated is limited to just 76 pieces and will be available online and in select Undefeated stores from June 22. You can also place an order for one of your own via the H. Moser & Cie website.