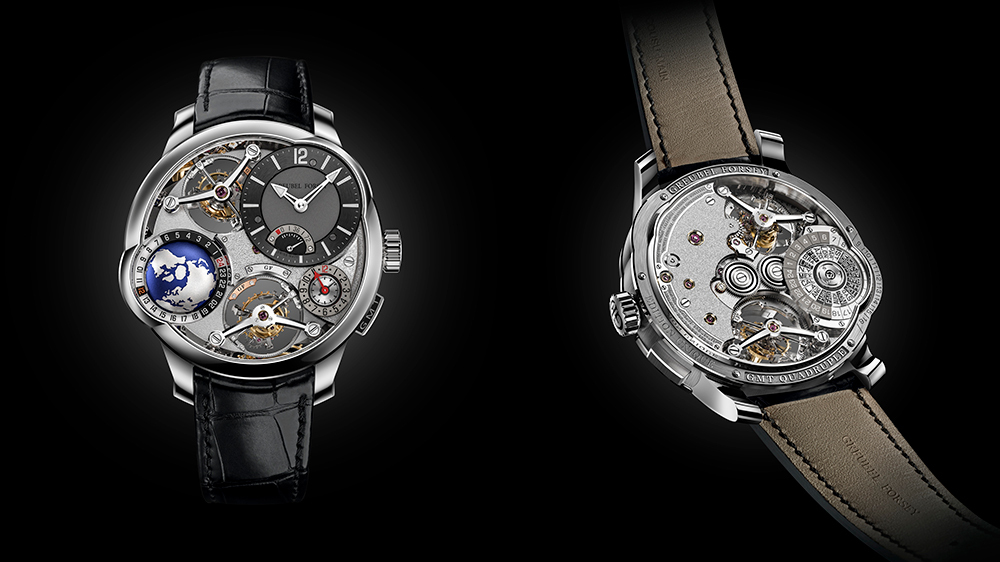 There are some watch collectors who consider a Paul Newman Daytona a grail watch and others who would drop well over £2 million to add a rare Patek Philippe Ref. 2499 to their collection. For that much money, you could buy a classic Mercedes-Benz 300SL Gullwing and a Roadster, and still have change left over.

But there are serious watch enthusiasts who consider independent watchmakers, some of whom have only been in business for the last 20 years, to be equally important thanks to their wildly inventive new ways of telling the time—and their dedication to small batch production focussing on quality and finishing to an almost unparallelled level. Greubel Forsey—among others like Philippe Dufour, Kari Voutilainen and Vianney Halter, to name a few—would be at the top of the list for many. “What we wanted to do [when Greubel Forsey was founded] was build watches with the highest level of hand-finishing we could and explore new areas in terms of the mechanical watch—those were the two driving forces,” co-founder Stephen Forsey told Robb Report. “We’re not trying to be a commercial brand. The objective is to make more creations—to develop more different types of movements. With the launch of the GMT Quadruple Tourbillion we have made just 25 different timepieces since we started. These are really different calibers. Not a different model where we change the dial or the case.” That, by the way, is 25 different calibers in the span of 15 years. To put that into perspective, calibers often take around three years to make and cost well into the millions to develop—many independents operate for 15 years and only have three calibers to their name.

That is a very expensive endeavor. How are they able to do it? While some independents get their business off the ground through relationships with collectors who act almost like angel investors, buying into a watch before it has even been produced, Forsey says that the initial funding for his company’s first watch, the Double Tourbillon 30º priced at 380,000 CHF  (around £290,000) when it debuted in 2004, came from their own grind. The duo were able to fund that watch through Compli Time, a company they founded in 2001 after two years of collaborating on consulting projects for other brands. At the time, the partners had, “just enough to live on” as Forsey puts it. They poured their ideas into development projects for other brands through Compli Time, which generated enough revenue to build a small team. As a result, Compli Time became an R&D hub for Greubel Forsey’s first caliber, which was four years in the making. For the collectors that were able to get their hands on Greubel Forsey’s first watch, they have something truly special in modern watchmaking—Greubel and Forsey had to build some of the parts by hand.

In this day and age, there are very few watchmakers that are able to do that. The new word for some watchmakers at many manufactures is “technician”, meaning specialists who can operate watchmaking’s new machinery (like CNC machines, for example). “The reason is that the renaissance of mechanical watchmaking came quite quickly and there was a rush of new technology,” says Forsey. “So the watch industry, 99.9 percent of it, no longer needed a watchmaker who could machine one part on a traditional tool—they needed skilled technicians.” Without the funding for the equipment or technicians, Greubel and Forsey had to roll up their own sleeves and do the work themselves. Fortunately they had the know-how to do so. As a result Greubel, Forsey and a group of other independent watchmakers have passed on these traditional skills to young watchmakers, through their Time Æon Foundation. It means that not only can their own pieces can be serviced well beyond their lifetimes, but also that younger watchmakers will be able to restore antique and vintage watches well into the future.

Fast forward to 2019, which marks Stephen Forsey and Robert Greubel’s 20th anniversary as co-workers, and the new GMT Quadruple Tourbillon is a representation, in the metal, of what years of hard, meticulous work can produce. The first version of Greubel Forsey’s masterful GMT timepiece was launched in 2011 and was known for its incredible finishing that included graining, beveling, black polishing, lapping and frosting—showing off Robert Greubel and Stephen Forsey’s mastery of 200-year-old English and French techniques for which the brand has become known. It was also notable for its 3D globe that indicated the earth’s rotation in real time. The watchmaking duo unveiled a new version last year called the GMT Earth, which was equipped with a mechanism similar to the original GMT movement but came with a new redesign and a window on the side of the case that showed another view of the 3D globe.

At around £630,000 and limited to just 11 numbered pieces in white gold in its first editions (a total of 66 will be made), the GMT Quadruple Tourbillon is hardly down to earth. But Forsey says nearly all of its profits go towards R&D for the development of new calibers, which is why they are able to create pieces of such magnitude with next-level technical expertise, finishing and design. Collectors can be assured that very little, if any, of those six-figure Greubel Forsey price tags are going towards the bottom line for a marketing budget.

The nearly obsessive level of craftsmanship ensures that these pieces also remain extremely rare. “We couldn’t build a commercial brand if we wanted to,” says Forsey. “The level to which we hand-finish our watches is what constrains our capacity to build them.”