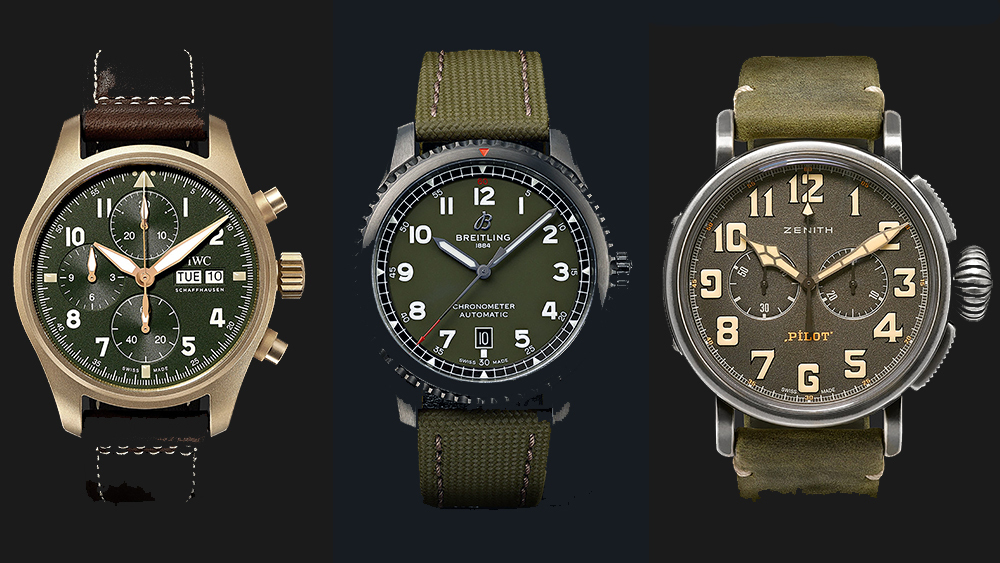 Looking for a stylish alternative to the slew of steel bracelet sports watches on the market? There are plenty of options that offer depth in both design and heritage that pair nicely in today’s more casually dressed world. All have serious ties to historical aviation—in case you are looking for something to talk about other than your latest Netflix binge—but they’ll also give you a reason to get out of your sweatpants.

Before Sylvester Stallone made Panerai a civilian must-have when he wore one on his jumbo-sized wrist in the action flick Daylight, the company’s bread and butter lay in producing timepieces for both the Italian and Egyptian navies. The Radiomir went into production in 1938 for Italian frogmen and current models have changed very little in design.

What’s new, of course, is the modern technology that now equips these tougher-than-nails timepieces. The GMT function sported on this model wasn’t invented until the mid-50s, and its Swiss-made P.4001 calibre automatic mechanical movement is equipped with all the bells and whistles of a 21st-century timekeeper, including a 3-day power reserve, a frequency of 28,800 vph and an anti-shock device.

Fortunately, its design codes remain as relevant today as they did over 80 years ago. And you can bet they’ll last for decades to come.

IWC’s history with pilots dates back to the dawn of the aviation era. In 1933, one of the sons of the owner of IWC, Ernest Homberger, earned his pilot’s license. He’s said to have conceived the company’s first flight-ready watch, the Ref. 436 Mark IX, just two years later. Today, the genre counts for the most recognisable and coveted timekeepers in the current IWC lineup and the brand is intent on capitalising on their popularity.

The proof? During the Salon International de la Haute Horlogerie, Switzerland’s largest watch trade show, IWC marketed the collection by flying in a vintage spitfire to celebrate the heritage that sat perched in its booth; it even made an appearance at a dinner attended by the likes of Bradley Cooper. The next shot in the arm for the series will be when they make their big-screen debut in the Top Gun sequel starring Tom Cruise this summer.

This 41 mm by 15.3 mm Spitfire chronograph is a particularly handsome example with its contrasting hunter green dial and gold bronze case accented with a rich mahogany-hued leather strap with white stitching.

Named after the Curtiss P-40 Warhawk, the American single-engined, single-seat, metal fighter aircraft that first flew in 1938, this 41 mm by 10.47 mm is a decidedly slimmer pilot’s watch for those who prefer something a little more refined than the traditional bulky versions. Its olive-green dial and matching Nato strap mimic the body of its namesake aircraft, while red accents on the seconds hand and just above the 12 o’clock marker are reminiscent of the naval bird’s nose. The back of its black stainless steel case also features the image of the P-40 Warhawk and the Curtiss name.

While the WWII-era plane doesn’t have specific ties to Breitling, it was launced in the same year as the watchmaker’s Huit Aviation Department, established to manufacture chronographs for the RAF. Consider the allied inspiration a royal win-win.

Although Bell & Ross has built its image on large square-faced cases meant to evoke the shape and size of cockpit instruments, the V2-92 is a more subdued and traditional proposition. Beneath its more universally wearable 41 mm by 12 mm hood, it comes equipped with a sturdy ETA 2892/Sellita SW300-based BR-CAL.302 meant to withstand the rough and tumble of your next adventure.

It’s a lighter version of a military-green dial with markers a few shades brighter for contrast and offers a nice alternative to the slew of deeper-toned models. Its Nato strap comes with a single black stripe down the middle, a nod to its darkened bezel. Plus, its smart design matched by a palatable price will ensure your bank account doesn’t fly into the red.