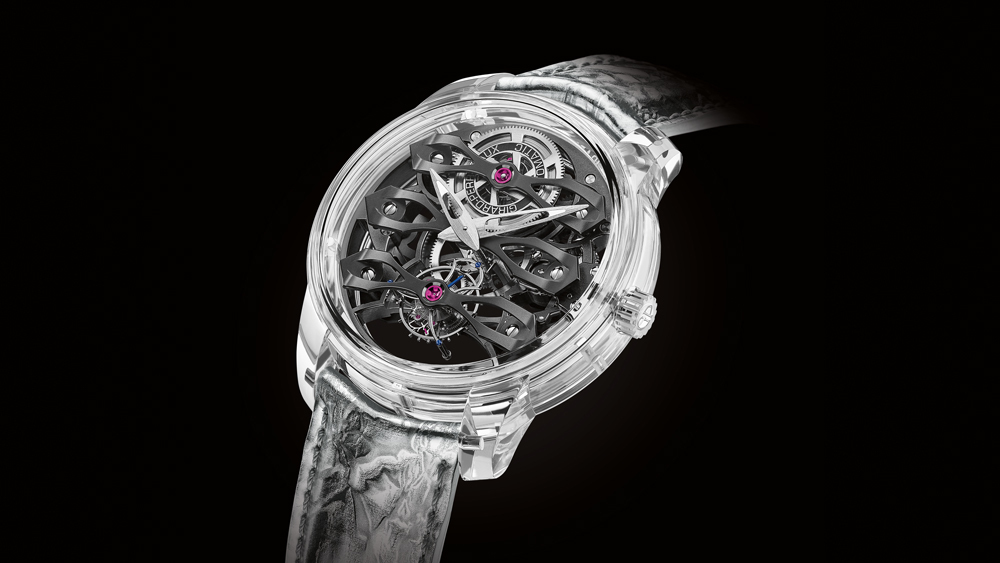 Girard-Perregaux’s 135-year-old Three Bridges movement has moved into a new house. Over the weekend, at Watches & Wonders Miami, newly minted CEO of six months Patrick Pruniaux unveiled a new Neo-Tourbillon Three-Bridges timepiece in a full sapphire crystal case. The new timepiece, dubbed the “Quasar,” is modeled after last year’s Neo-Tourbillon Three Bridges timepiece, which updated the brand’s recognisable movement in a skeletonised version with its Three Bridges and case in titanium. The bridges had been enlarged and curved—taking inspiration from modern cable-stay bridges. The result was a graphic update to the Three Bridges that looked very modern without resorting to a sporty look.

The Quasar’s new sapphire crystal case serves to highlight the enlarged titanium bridges and tourbillon. Through its crystal the Caliber GP9400-1035 comes to life from every angle. Sapphire crystal is very difficult to produce and, therefore, comes with a price tag to match—in this case, around £149,000 for the 45mm watch. The material was first introduced to watchmaking in the ’90s and is lauded not only for its design qualities, but also for the fact that it’s incredible durable and virtually scratch-proof—its the second hardest material after diamond. The sapphire crystal is created by merging the particles of oxygen and dihydrogen at nearly 3,000 degrees Kelvin (or 4,940 degrees Farenheit). A sapphire crystal disc is creating that is then cut, machined, drilled, domed and polished using tools made from diamond (another cost factor), that requires over 200 hours of work.

It’s a process that’s recently become increasingly popular with watchmakers like Bell & Ross, Hublot, Armin Strom, MB&F, Bovet and Grebuel Forsey all working with the material to highlight their technical watchmaking. In this case, the Three Bridges in sandblasted titanium, coated in a black PVD treatment, are the stars of the show.

The name of the watch also plays on Girard-Perregaux’s ongoing celestial marketing theme this year—the heavens and space serve up perennial inspiration for watchmakers. “The Quasar is the strongest source of light in the universe after the sun, and because we want to have all of the light in a case, we’ve called it the Quasar,” says Pruniaux at Watches & Wonders.

The big unveiling was a homecoming of sorts for the Swiss executive, who lived in Miami for four years working for LVMH’s Wines & Spirits business for Latin America, where he ultimately became the regional sales director. He was clearly happy to be back in the warmer climate of South Florida, stressing that they would be back for Watches & Wonders 2020. He used the moment for two big launches—the Girard-Perregaux Quasar and later that afternoon, the unveiling of the Ulysse Nardin Mega Yacht, where Pruniaux also holds a CEO role.

The Quasar is the most striking release from Girard-Perregaux this year, and while it’s not a limited timepiece, you can be sure it will be hard to get. The 45 by 15.25 mm watch comes with two straps—a hand-sew black alligator leather or a space-age looking silver version that looks like shiny foil. Pruniaux described them appropriately as the “Swiss” strap versus the “Miami” strap. Whatever you fancy, this is a standout timepiece whose photos hardly do it the justice it deserves when seen in person.