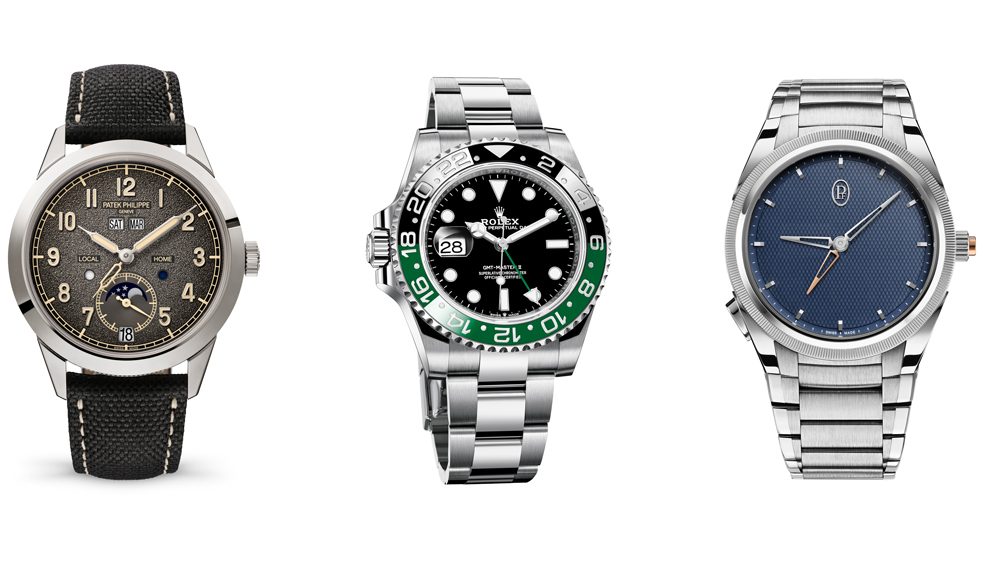 Even though many, if not all, of the models introduced at Watches and Wonders Geneva last month were conceived before the events of 2020, it’s tempting to interpret the slew of travel-themed timepieces as the inevitable byproduct of two years of pandemic-induced stasis. At the very least, they prove that watchmakers, like so many of us, are keen to start crisscrossing the globe again. The seven wristwatches highlighted below are the perfect accessories to help you realize those flights of fancy.

Hermès CEO Laurent Dordet described the brand’s new Arceau Le Temps Voyageur—available in two versions, a 38 mm blue-steel model and a 41 mm black platinum style—as a watch with “two invitations to travel,” referring to the real-world GMT function that provides the time in two different time zones simultaneously, as well as the imaginary world depicted on the dial, a stunning “Planisphère d’un monde équestre” fantasy map, borrowed from a silk scarf design by Jérôme Colliard. Encased in the watchmaker’s signature Arceau style, designed by Henri d’Origny in 1978, both models are equipped with the Hermès H1837 mechanical self-winding movement, featuring a 122-component “traveling time” module that powers the hours, minutes and dual-time display with city indication. $22,550 for blue, $28,825 for black; hermes.com

At the center of Jaeger-LeCoultre’s magnificent new world time watch is a map of the world as seen from the North Pole. Not your standard 2-D map, this version floats above the dial bed on a domed skeleton formed by the longitude and latitude lines of the Northern Hemisphere, in which the outlines of the continents are cut from a sheet of white gold and decorated with champlevé enamel. The process requires 70 hours of work for a single dial. A disc of vivid blue translucent lacquer applied over a wavy guilloché pattern represents the oceans. A flying tourbillon that appears in a circular aperture to one side of the map serves as a reminder that Jaeger-LeCoultre is capable of producing so much more than a pretty face. Available in a limited edition of 20 pieces. $227,000; jaeger-lecoultre.com

Hailed as one of Watches and Wonders’ standout introductions, the new Tonda PF GMT Rattrapante from boutique watchmaker Parmigiani Fleurier features both a GMT dual time function and a rattrapante complication. The latter is typically used to enable the simultaneous timing of multiple events. But in the case of the Tonda PF GMT, the watchmaker has repurposed the rattrapante as a flyback accessory to the GMT. Its two skeletonized delta-shaped hour hands — one in rhodium-plated 18k gold, and one in 18k rose gold — remain superimposed until a press of the pusher at 8 o’clock sends the upper rhodium-plated gold hand, which indicates local time, one hour forward, revealing the rose gold “home time” hand beneath it. Pressing the crown-integrated rose gold push button again repositions the hands. “What makes it special is that never before has the rattrapante function been used outside chronographs,” Guido Terreni, Parmigiani’s chief executive, tells Robb Report. Housed in a 40 mm stainless steel case with a spare Milano blue dial and a knurled platinum bezel, the world premiere comes on a trendy integrated steel bracelet. $27,800; parmigiani.com

Beyond its novel combination of complications, an annual calendar and the display of a second time zone, what the new Ref. 5326G-001 has going for it is its rugged, retro-looking dial, whose textured, charcoal gray appearance is meant to evoke the vibe of a vintage camera. Housed in a new Calatrava case bearing guilloched sides, the model features the brand’s signature hobnail pattern. $76,880; patek.com

Among the three new versions of the iconic World Time model that Patek Philippe introduced in Geneva, Ref. 5231G is almost certainly the most collectible. The latest in a long line of world timers featuring a stunning Grand Feu cloisonné enamel dial, this 38.5 mm white gold version boasts a map that highlights Oceania and Southeast Asia. $88,710; patek.com

In keeping with Rolex’s penchant for evolution, not revolution, the new Air-King is a study in subtle change. The redesigned 40 mm Oyster steel case has been made sportier thanks to the addition of crown guards, and the Oyster bracelet now has a broader center link and an Oysterlock safety clasp. The distinctive Air-King lettering, a dial fixture since the model debuted in 1958, and the black dial introduced in 2016, with its large 3, 6 and 9 hour numerals, remain unchanged. But the minutes scale now features a “0” before the “5” for a more balanced display. The new optimized Chromalight display guarantees maximum legibility in dark conditions, and a new and improved luminescent material on the hands, the triangular hour marker at 12 o’clock and on the numerals, has made the dial easier to read in the dark. Newly equipped with Perpetual caliber 3230, the Air-King is ready to take flight. $7,400; rolex.com

The classic dual time zone watch, introduced in 1955, now comes in an unexpected left-handed edition featuring a crown and crown guard positioned on the left side of the 40 mm Oystersteel case, as well as a date aperture and Cyclops lens at 9 o’clock instead of the traditional 3 o’clock. That’s not all. The model’s monobloc Cerachrom bezel insert now comes in green and black ceramic, a color combo never before seen on the GMT-Master II, and sure to inspire a host of pop culture-inspired nicknames. $11,050; rolex.com