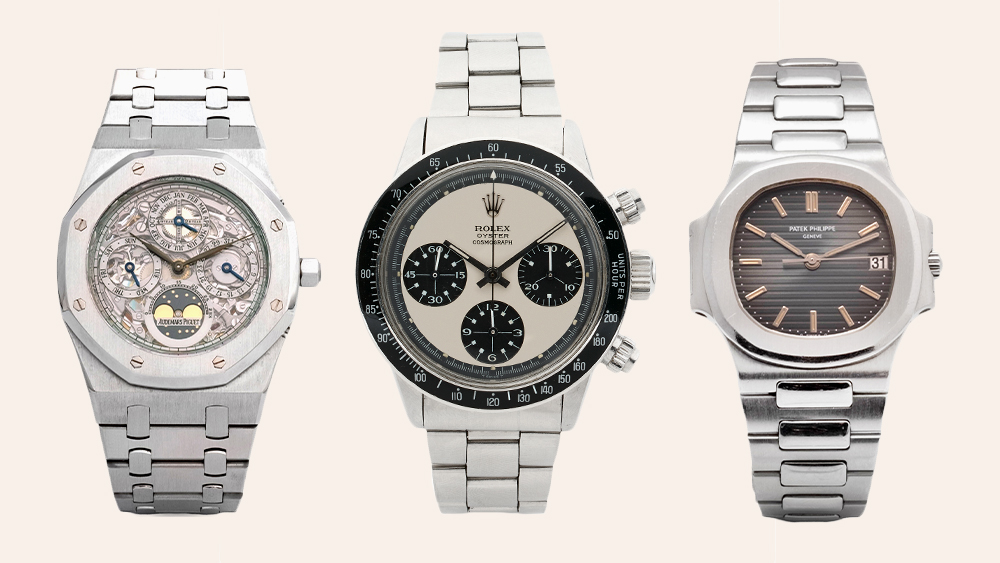 Antiquorum is taking over the Monaco Yacht Club tomorrow to auction £21 million worth of luxury watches, including pieces from the holy trinity – Patek Philippe, Rolex and Audemars Piguet – as well as two of the hottest independents in the pre-owned market: F.P. Journe and Richard Mille. The live auction takes place on 19th July. There are 373 lots, the majority of which were sourced from three collections in Switzerland, Monaco and the Middle East. The total estimate of the sale is from 15 to 25 million CHF.

The top Patek Philippe lots are, not surprisingly, both Nautilus references. One is a Ref. 3800/001 in platinum with an original platinum bracelet, and the other is a Ref. 3700/1 in 18-karat yellow gold that comes with a matching set of cuff links. Both are estimated to sell for between around £170,000 and £340,000. Another Patek model growing in popularity is the vintage Calatrava, and this sale includes a Ref. 565 in steel, double signed by American retailer Black Starr & Gorham, with an exotic leather and metal strap. It is likely to fetch somewhere between £42,000 and £67,000.

The two main independents in the sale, F.P. Journe and Richard Mille, are hot tickets on the secondary market right now. According to a review of the watch auction market in 2021 by The Mercury Project, there were 1,052 watches sold in the six-figure category in 2021, which accounted for 43 percent of total sales. “As usual, Patek Philippe comes out on top with 40 percent of the lots (417 timepieces), but it is followed by a core trio of brands: Rolex, with 188 pieces, Audemars Piguet with 134 pieces and F.P. Journe with 110 pieces. All other watch brands contributed 20 percent, including Cartier (27 lots) Richard Mille (24 lots) and A. Lange & Söhne (23 lots).”

With the five Richard Mille watches in the sale, Antiquorum will set a record for itself: the 100th Richard Mille sold by the auction house. “For the past five years, on the second-hand market, Richard Mille, master of independent watchmakers, challenges continuously the big three—Rolex, Patek Philippe and Audemars Piguet, says Antiquorum CEO Romain Rea. “He is becoming one of the giants of watchmaking history, and Antiquorum is proud to take part in this journey.”

Leading the pack is a one-of-a-kind Skull Tourbillon Vanitas Vanitatum Ref. RM 52-01 tourbillon, one of 21 pieces made. The plate and bridges of the openworked movement are designed as a skull, and the movement is linked to the case by four bridges inspired by the crossed bones that appear on the flags of pirate ships. The case is made of brown sapphire. There is no estimate on this one, but Antiquorum says each of the watches sold for “more or less” $500,000 )or around £421,000) when it was made in 2012.

Also on deck from Richard Mille is the very unusual RM-053 AM TI, a tourbillon with a suit-of-armour-like case made of titanium. It was designed for polo players, with two raised arcs on a 30-degree incline, opening on two viewing windows, one for hours and minutes, the other for the tourbillon carriage and seconds hand. It is estimated at around £840,000 to £1,600,000 and Antiquorum says it is one of 15 made.

The leading lot from F.P. Journe is a Chronomètre à Resonance in platinum, of which 10 examples were made, with a yellow dial and silver subdials. It is estimated at around £250,000 to £420,000.

There will be previews at the Monaco Automobile Club today.