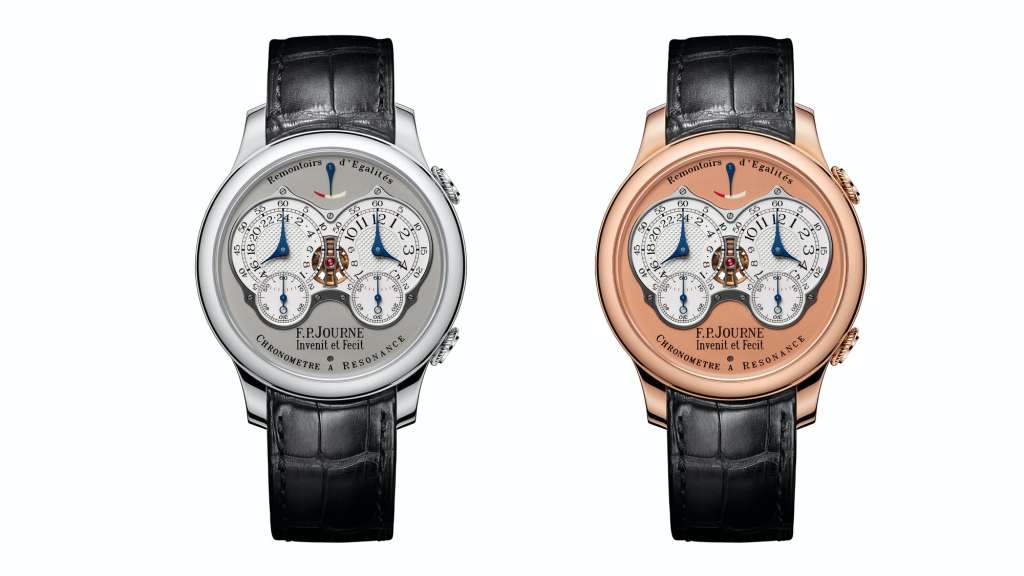 When master watchmaker François-Paul Journe created his Chronomètre à Résonance timepiece 20 years ago, it was the first wristwatch to ever achieve the phenomenon of natural chronometric resonance through dual movements that synchronise themselves for greater accuracy. The concept of mechanic resonance is the tendency of an oscillating object to absorb more energy at specific frequencies. You can read more about it in our retrospective piece on the Résonance model. Abraham-Louis Breguet was the first to have mutually-resonating movements in a pocket watch but it was an incredible feat of modern watchmaking when Journe became the first watchmaker to conceive the idea in a wristwatch.

“I first started being interested in resonance in 1982,” Journe told Robb Report. “I was in charge of fixing a double regulator by [Abraham-Louis] Breguet and it caught my attention because nobody really knew anything about it and that’s how I came up with the idea of putting it in a wristwatch.”

On his first attempt at making the watch (the second watch he ever made), he realised it wasn’t working well enough so he put it away for 15 years until he gained further experience. Up to 1994, he had been making custom watches, but when he began planning a full collection, he decided it was time to revisit his early project.

“I decided to take the watch back and make this failure a success and that’s how the first Résonance was created,” says Journe. At the beginning of its creation, he kept it the movement in a plastic box, which he kept in his pocket, to test its accuracy. “Whenever I was walking, I would grab it from my pocket and put it to my ear to see if it would resonate. It worked very well for a few months, but after it had some difficulties, but a good friend of mine tried to boost my morale. He told me, ‘It doesn’t matter if it works or not; it’s still a beautiful movement.’” He kept improving upon the idea and by 1999 he unveiled the prototype at Baselworld (Switzerland’s largest watch fair) and released the first Résonance in 2000.

Now, in celebration of two decades of his most recognizable timepiece, Journe has updated the movement of his Résonance to add two constant-force mechanisms that further improve upon its accuracy.

“Ultimately, it’s all about the precision,” says Journe. “The concept of the Résonance, having the two balance wheels resonate, was to cancel the effects of the wrist movement. So the idea to integrate a constant force mechanism was to bring more accuracy because the fluctuation of the isometery/barrel spring is actually going to be cancelled with the constant-force mechanism and being able to have more accuracy in the watch over time.”

Journe says the improvement offered by the new constant force mechanisms allows for zero variation in accuracy. Previous Resonance timepieces had a variation of 5 to 6 seconds in a span of 24 hours. That might sound minute to anyone who isn’t a horophile, but in the world of watchmaking, it is a significant chronometric achievement. “The ultimate game in watchmaking is to fight against the loss of precision,” says Journe.

Was this new mechanical improvement something he could have done when the Resonance first debuted? Sure, but Journe says it wouldn’t have been commercially viable. When he launched the watch two decades ago, the largest size for a timepiece, typically, was 38 mm. “Adding the extra layers then, I would have had to make the watch much bigger at 40 or 42 mm,” says Journe. “Today it is OK to have a watch of this size, but back then it would have been too big and I would not have sold any.”

But while he continues to improve on the Resonance’s mechanics, he says he always begins with the design first. Here there have also been modifications. It still comes with two dials, but its appearance is closer to the style of Journe’s Astronomic Souverain, launched last year, because there is only one spring barrel to distribute the energy. The new Chronomètre à Résonance features a redesigned case in platinum or 18-karat 6N gold with a crown now placed at 2 o’clock instead of 12 o’clock. The crown is turned clockwise for the left dial and anti-clockwise for the right dial. The seconds can be reset simultaneously with the pull of a second crown at 4 o’clock. The dial has been redesigned in gold with two identical silver guilloche hour and minute subdials—one indicating 12 hours at 3 o’clock and another for 24 hours at 9 o’clock.

The 42-hour power reserve indicator is positioned at 12 o’clock with the hand placed vertically instead of the off-centre placement at 11 o’clock in previous models. In the new Résonance, the hours, minutes and seconds are merged with an openwork aperture which gives a view of the differential bridge, which along with the barrel spring, helps distribute energy to the two gear trains. The dials come in red or white gold with the 2 hour subdials in a whitened silver with a Clous de Paris guilloché pattern. It is available in gold ($106,800) or platinum ($110,600) with a leather strap or on a gold or platinum bracelet.

Needless to say this a major development in the history of the Chronomètre à Resonance and will be a must-have for serious enthusiasts of the watchmaker’s work. It is not limited, but, like most of the watchmaker’s pieces, it will be hard to get; the Swiss manufacture makes just 1,000 pieces a year. New editions can be so hard to come by, collectors sometimes buy in bulk in order to get access to one coveted watch. At a recent VIP collectors event at the brand’s Miami boutique in February, Shark Tank‘s Kevin O’Leary said that in order to get a boutique-only edition Journe he wanted, he had to strike a deal and buy several timepieces at once.

“I have a lot of watches, but I’ve never before bought four [from a single brand] at once,” O’Leary said. “Every time I wear one of my F.P. Journe watches people stop me and say, ‘What is that?’ They’re just incredible timepieces.” Another Miami-based collector said he owns 14 Patek Philippe application timepieces (the crème-de-la-crème of the revered watchmaking house), but he still had to beg every time he wanted to get an F.P. Journe on his wrist.

So how does Journe remain a niche brand while satisfying his growing and high-level club of collectors? “It’s a problem,” says Journe with a smile. “One that a lot of watch brands would like to have.”

But he says he is already hard at work on his next big feat, so collectors should have more big Résonance developments to look forward to in coming years.

“My goal is to work on a watch that has no friction, because if you have no friction you don’t need to use oil and this watch works with oil, which over time gets used by the escapement and affects the accuracy of the watch, so for me the next challenge would be to come up with a different solution,” says Journe. “I’m working already on a new escapement that would not need to use oil, but it was too early to use it for this watch,” says Journe. “It’s too risky to use it right now on a watch with two escapements. At the moment, I’m trying it on the movement of the Chronomètre Souverain. Once I am satisfied that it can work, I will be implementing it in the Resonance.”

That’s a pretty big reveal from Journe and it would effectively eliminate the need for servicing the replacement of oil in the mechanism. Another renowned watchmaker, Roger W. Smith, has also been hard at work researching the use of an escapement that eliminates the use of oil, but if Journe achieves the innovation first, in a production timepiece, it will be big news.