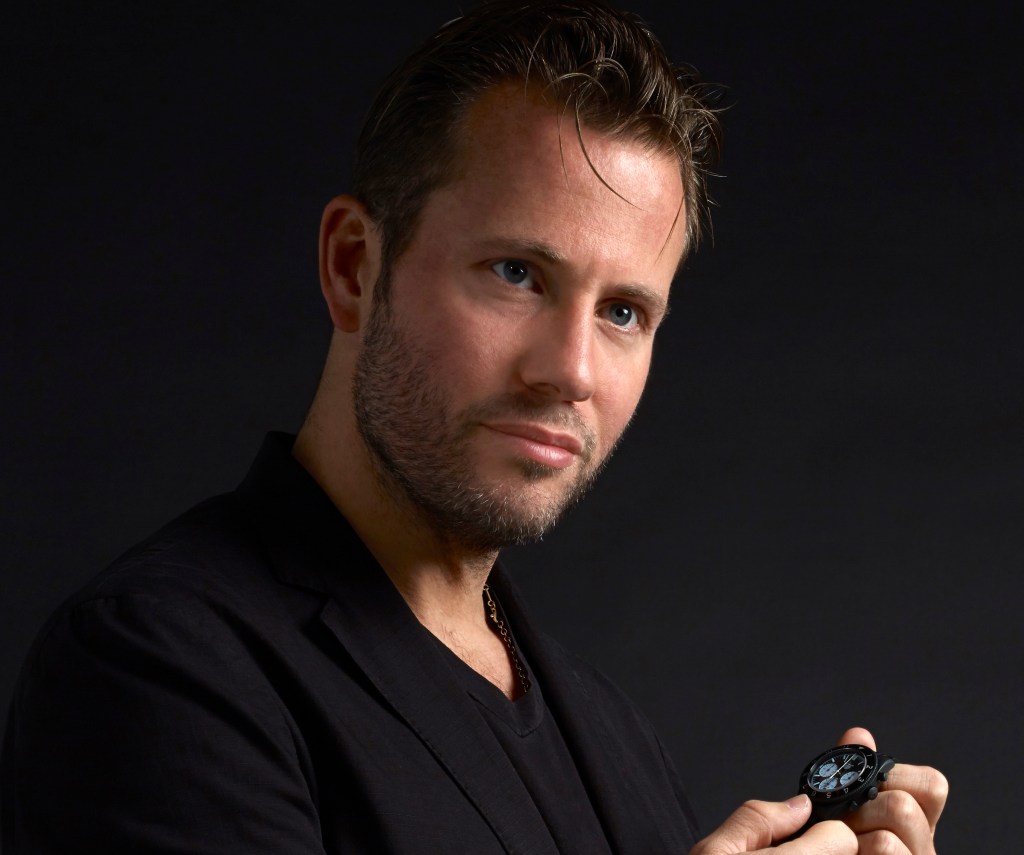 “I love the Dark Lord,” George Bamford exclaims with the breathless yet insouciant enthusiasm that is his default setting. He is not confessing a devotion to Beelzebub – although, given the enviable way this man lives, you could be forgiven for suspecting a pact with Lucifer. Rather, he’s referring to a particularly sought-after mid-’70s Heuer Monaco Chronograph, nicknamed ‘Dark Lord’ thanks to its brooding aesthetic.

His company Bamford Watch Department initially gained renown for the diamond-like carbon (DLC) coated timepieces George customised first for himself and subsequently for watch-collecting friends. It was the desire to emulate the look of the aforementioned Heuer – one of the first watches to be produced with a PVD-blackened case – that sparked Bamford’s earliest experiment with the dark(ening) arts.

“My first ever watch that I blackened,” he explains, “was a TAG Heuer Monaco. I’d done a concours d’elegance-type car event with my father and was given a Monaco as a memento. I wanted a Dark Lord but I couldn’t get my hands on one, so I tried to figure out how I could transform this steel watch.”

The team at construction and agricultural equipment giant JCB – the multi-billion-dollar company founded by George’s grandfather, Joseph Bamford, and today run by his father, Lord Anthony Bamford – had an idea. “They said, ‘Oh, there’s a DLC process used in the mining industry, it may change the watch to black.’ I thought, ‘How freaking cool!’” They tried it, the results were superb and soon, George’s pals began asking if he could repeat the trick on their own watches. 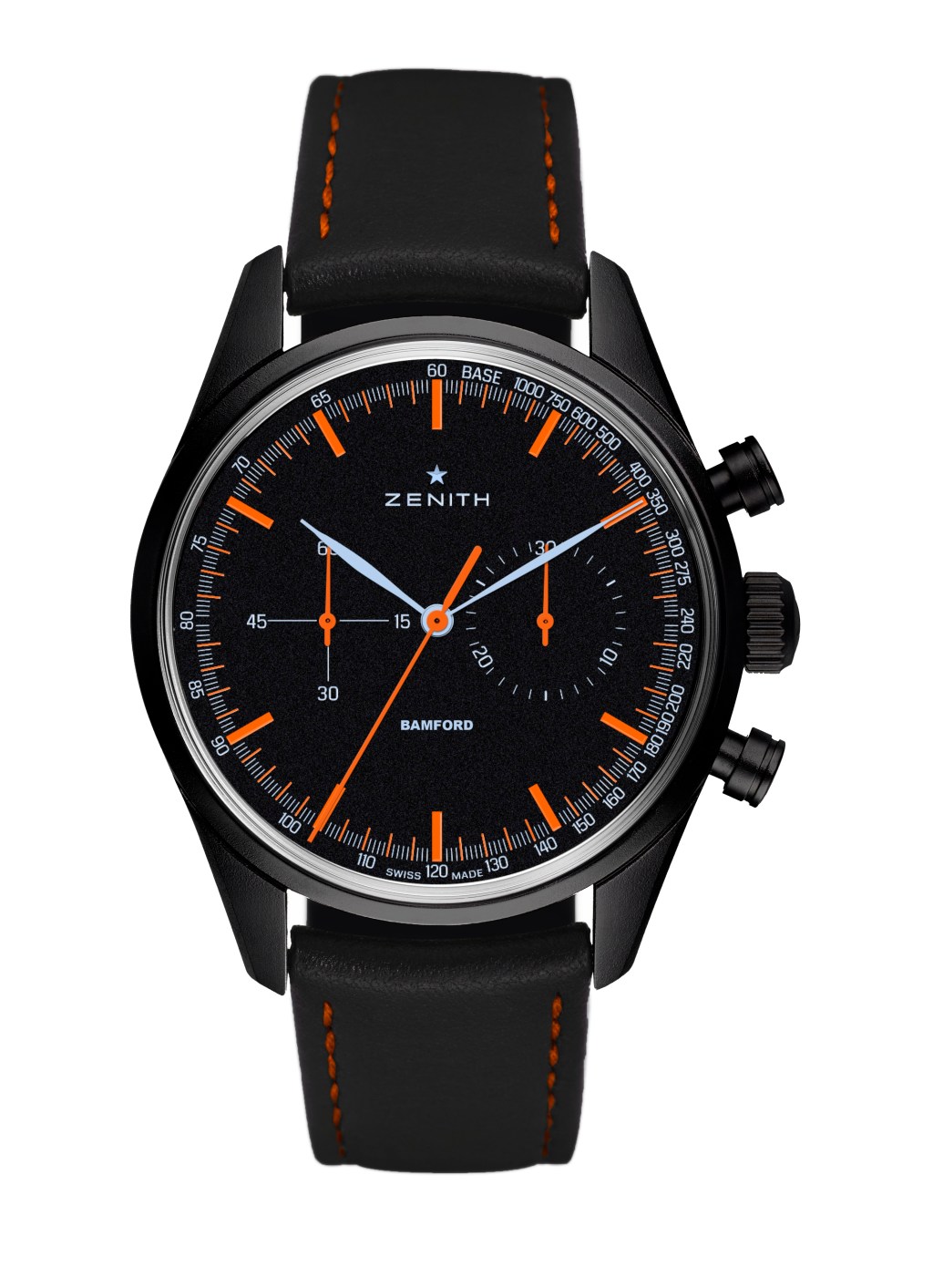 Where once he was seen by watchmakers as a renegade performing sacrilegious modifications on their precious creations, today Bamford has been welcomed into the fold. Likening Bamfordised watches to AMG Mercedes – something already great, being made racier and cooler – watch industry legend Jean-Claude Biver struck a deal to anoint Bamford the official customisation partner for LVMH’s watch brands.

It was one of Biver’s final moves before resigning from his position at the helm of the group, which includes TAG Heuer, Bulgari, Zenith and Hublot. Watches from these brands customised by Bamford retain their full factory warranties, and George and his team have been welcomed to create limited-edition collaborations that are produced at the watchmakers’ manufactures.

The first of these ‘official bootlegs’ was a Zenith El Primero that George devised in collaboration with his friend, Japanese streetwear guru Hiroshi Fujiwara of Fragment Design. Though controversial due to its minimalist dial (making the chronograph’s core functionality something of an afterthought), the 25-piece limited-edition – released exclusively through Dover Street Market boutiques – sold out in less than a day. George scoffs at criticism of the timepiece’s prioritisation of form over function. “Honestly, do people actually use chronographs? In reality, they use the stopwatch on their phone, or they go, ‘Alexa, time five minutes.’ But they love the look of the sub-dials and so on.” When Biver first viewed the proposed design, he was unconvinced. Seeing the finished piece, however, “Jean-Claude just said, ‘I want it!’ I was, like, ‘We’ve done our job, then,’” George recalls.

Following the watch’s launch, George says Biver told him, “‘You know your mistake? You didn’t make enough watches.’ But for me, it wasn’t about the financial side. It was about doing something with Hiroshi that we were both happy about. And we really were.”

For the second LVMH x Bamford collaboration, launched at BaselWorld 2018, George heeded Biver’s advice and ramped up the quantities, producing 500 pieces of a carbon-fibre cased TAG Heuer Monaco with matt black dial, embellished with aqua ‘Bamford Blue’ markings. Inspired, like that first black-out experiment, by the 1970s Dark Lord, the watch saw George seize the opportunity afforded by his association with LVMH to not simply treat, tweak or customise an existing product, but to build an entirely new case from an innovative material.

George says he thought to himself, “They have the technology. We can do it. We can build it. I did not want simply a black Monaco, with PVD or DLC or whatever. I did not want that. I was like, ‘We need to build a new case.’” A salute to the Dark Lord, but something fresh. “When I saw it for the first time, I fell over. I was speechless. And to get me speechless is quite a difficult thing … The birth of a child and the birth of this watch, probably, are the two things that have made me really speechless.

“God, I just compared the birth of my child to a watch.”