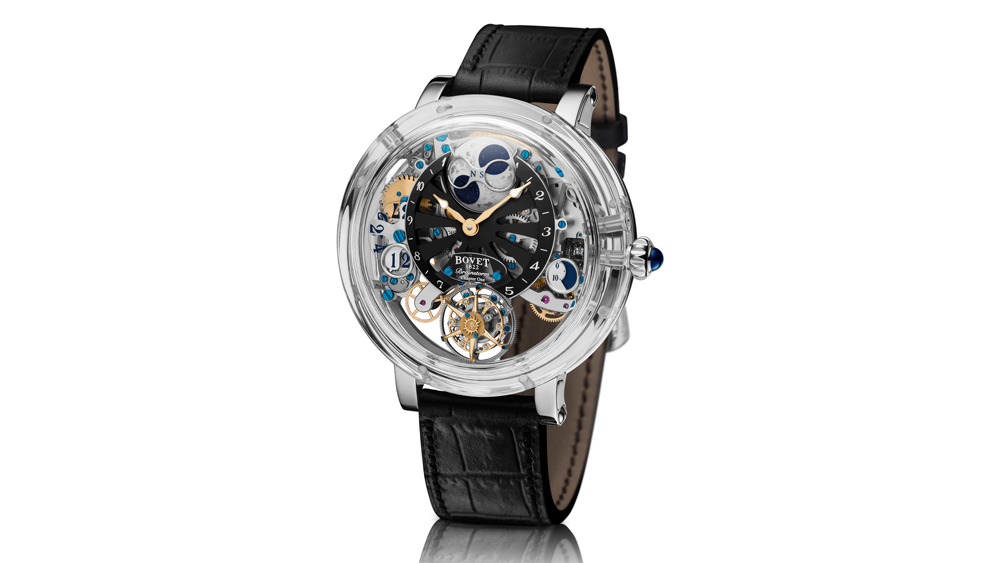 Bovet 1822 has quietly been making a name for itself in watchmaking circles as a niche Swiss watch brand known for its technically and aesthetically extraordinary timepieces. Last year, the Recital 22 Grand Recital, an astronomical complication, won the grand prize at the Grand Prix d’Horlogerie de Genève—also known as the Academy Awards of timekeeping. The new Recital 26 Brainstorm Chapter One, introduced at the SIHH in Geneva last month, is equally impressive. Its innovation lies in the successful integration of a sloped case design made of clear sapphire crystal and a stepped flying tourbillon movement, purpose-built to accommodate the inclined angle of the case.

Why sapphire? There are two reasons. One is aesthetic: it allows for a view of the movement from all angles, rather than just the traditional open caseback or openworked dial. Secondly, it is lighter than titanium and therefore makes sense as a material in a big watch—for a better view. It is also very hard. Next to diamond, sapphire is the hardest mineral on earth, and almost impossible to scratch. It’s a material that watchmakers have increasingly been gravitating to not only for its appearance, but also for its ability to show off the brands’ watchmaking capabilities to the fullest.

The slope-shaped case was inspired by a writing desk once owned by Bovet-owner Pascal Raffy’s grandfather, and was first introduced in the brand’s Shooting Star Tourbillon in 2016. Making it entirely of sapphire crystal, however, was a challenge. It started with a frame made of titanium, consisting of nothing more than a circular bezel as the base, with four lugs attached to it. The crystal case and movement are attached to the frame and then screwed on from the back. The bridges are machined into a succession of inclined planes.

“A curved middle had never been crafted in sapphire,” says Raffy. “Its exterior and interior beams required us to develop new machining and polishing processes. Such a profile is much more complex to manufacture, and it does not tolerate the slightest imperfection; any fault would be accentuated by the curve of the middle.”

The hand-wound flying tourbillon caliber was first introduced by Bovet in 2015, but for this watch, it was enhanced with a variable inertia balance wheel for greater accuracy, and it was rebuilt to fit the included case. The components were arranged on successive levels on the same plane as the inclined case. Most of the wheels can be seen peeking out around the periphery of the dial or through the cutout openings in the dial itself. In the 12 o’clock position, a moon phase indicator balances the tourbillon carriage at 6 o’clock, both of which are also inclined to fit the case shape. The dial, inclined on the same plane as the case slope, is made of aluminium that can be customised in one of several colours—or to match your favourite wheel rims.

This complicated watch no doubt had Bovet’s technicians scratching their heads. According to Raffy, it required close collaboration between movement, case and dial makers, and he thus christened it the “Brainstorm.” The baseplate alone required nearly a full day of machining. The watch will be made in limited quantities with only 26 pieces at $316,000 (around £240,000) each, but the second part of the title, “Chapter One,” tells us there will be future models using this technology to look forward to down the road.