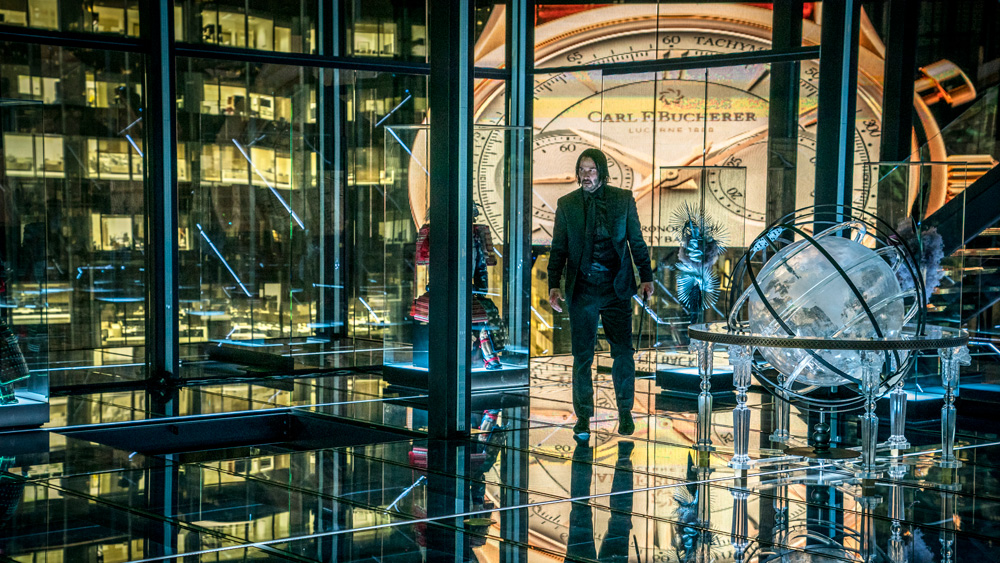 Product placement doesn’t get better (or bigger) than this. In John Wick: Chapter 3 – Parabellum, the third and latest installment of the über-action franchise about an assassin avenging his murdered puppy, a wristwatch by the Swiss brand Carl F. Bucherer is more than a stylish accessory for John Wick, played Keanu Reeves. It’s how he keeps his expertly timed killing spree on schedule.

Not only does Wick wear the brand’s Manero AutoDate, an automatic three-hand model with date display—inspired by classic 1960s design, the 38 mm stainless steel timepiece has a white dial and comes on a black leather strap—throughout the film, his cohort, the assassin Sofia, played by Halle Berry, wears the Manero Peripheral, an ultra-feminine wristwatch memorable for its cognac-colored, mother-of-pearl dial and diamond-set bezel.

Carl F. Bucherer makes another, much bigger appearance in a scene towards the end of the film. “Keanu Reeves’ character is under a glass cupola on the roof of the Continental Hotel, which plays a big role in the movie,” explains Gitte Hammerström, head of PR for the brand. “While he is fighting up there, you can see our brand movies as well as product animations in the back—for more than 10 minutes.”

The scene is striking in more ways than one. Hyper-violent and beautifully choreographed (“ridiculously sleek fandangos of destruction”, in the words of New York Times film critic Jeannette Catsoulis), the sequence is framed by a Brobdingnagian image of Carl F. Bucherer’s Manero Flyback in rose gold, which looms large behind Wick as he stands beneath the cupola.

Director and longtime brand ambassador Chad Stahelski has favoured Carl F. Bucherer since 2014, when the first film in the series came out featuring John Wick’s character in the Manero AutoDate. (Wick also wore the timepiece in the 2017 sequel.)

The brand is quickly developing a reputation for partnering with filmmakers who incorporate its watches directly into the action—as was the case in the 2017 action film Atomic Blonde, starring Charlize Theron. Talk about a hero prop! A Carl F. Bucherer Manero CentralChrono was a critical element in the plot.