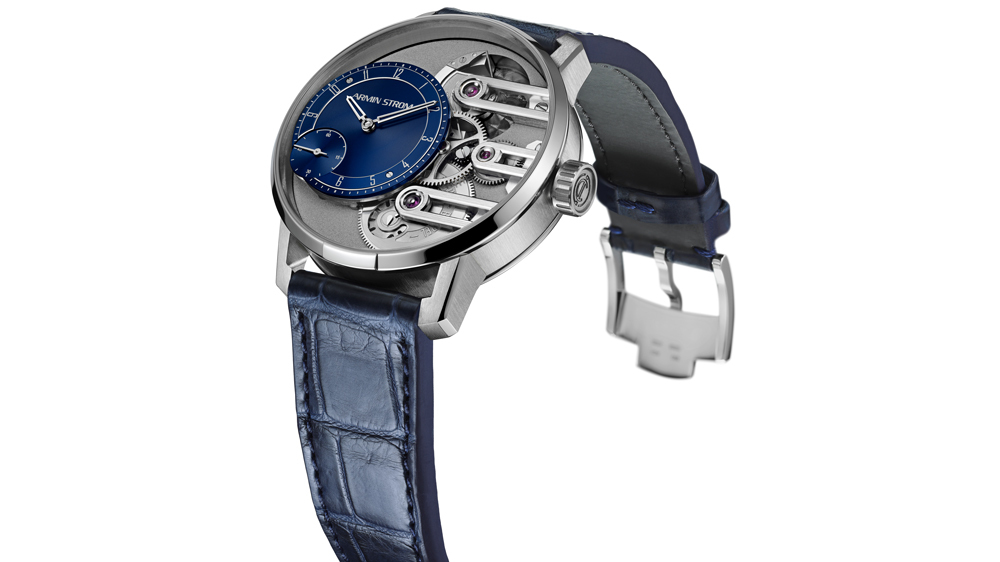 Since taking over Armin Strom just over a decade ago, Claude Greisler and Serge Michel have embarked on a quest to improve as many of the centuries-old concepts of watchmaking as possible. They started by modernizing the brand’s specialty of hand-skeletonisation by using CNC machines to mill components in way that allowed for a greater degree hand-finishing. They followed up with variety of innovative tweaks geared to make the watches more efficient and more robust—like the tourbillon diving watch, which is rated to 200 meters. Its latest invention is a Gravity Equal Force system (around £12,000) that modifies the mainspring barrel in a way that makes it work opposite to the way it has for the last century.

In technical terms, Armin Strom has added a “stop-works de-clutch system” to the mainspring barrel in its new caliber ASB19. Essentially, it reverses the way a barrel operates. Traditionally, the mainspring is wound by turning an arbor at the center of the barrel. As it unwinds, the barrel housing drives the gear train. The new system allows the mainspring to be wound by turning the barrel drum, while the arbor, as it unwinds, is what drives the gear train. Because the arbor is more stable than the barrel drum, the new system results in a smoother delivery of power to the balance wheel, which means greater accuracy and a longer power reserve (72 hours). “This simple change goes against at least a century of tradition, yet, when assessed objectively, it is clear that it is a demonstrably better system as it is more precise and stable during operation of the movement. I keeps the amplitude constantly in the optimal range,” says Greisler.

The de-clutch system was inspired by a “motor barrel” mainspring configuration, used on some vintage pocket watches, one of which Greisler had the opportunity to investigate in detail when a U.S. client brought a vintage pocket watch to Armin Strom for repair. He thought about how he could update the system for use in a modern movement, and the Gravity Equal Force system was born. “It’s inspired by the motor barrel, but it’s not exactly the same,” he says. “It could be called Motor Barrel 2.0.”

Along with applying the new system, Greisler rearranged the gear train slightly, creating an off-centre dial, which in turn enabled a smaller case—it is Armin Strom’s first 41 mm watch. A trio of large bridges covering the mainspring, balance and hand gears dominate the right side of the dial, an arrangement is similar to that found on vintage pocket watches. The Gravity Equal Force system is being launched in a new collection called System 78 (both Greisler and Michel were born in 1978), which replaces the Single Barrel collection and represents the entry point for Armin Strom.