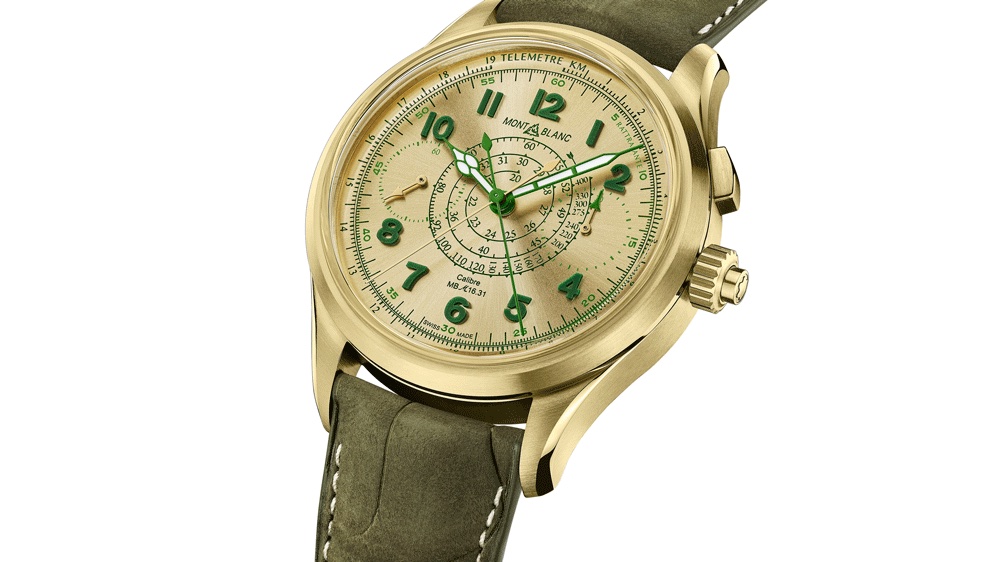 Montblanc is the latest brand to join the watchmaking gold rush, the surprising return to gold cases, many of them made of proprietary and custom alloys. The case of the 1858 Split-Seconds Chronograph Limited Edition 18 is lime gold, created with a mix of gold, silver and iron. Unique case materials have so far been a theme for the 1858 Split-Seconds Chronograph, which debuted in 2019 with a bronze case, followed last year by a titanium version.

The 1858 collection itself debuted in 2015 as a venue for paying homage to the designs and calibers of the Minerva manufacture in Villeret, Switzerland, which was founded in 1858 and has been around so long it bears the distinction of having timed the 1936 Olympics. Montblanc acquired the elite, high watchmaking workshop in 2006 and renamed it the Institut Minerva de Recherche en Haute Horlogerie. It was known for its beautifully hand-finished movements and its chronograph pocket and wristwatches, many of which were used by the military. Its movements, including the hairsprings, which are notoriously difficult to make in-house, are still made by hand using manually operated equipment. The split-seconds chronograph complication and tachymeter/telemeter functions are a tribute to Minerva’s early tool watches and to Montblanc’s more modern explorer-themed collections.

But the outstanding feature of the 1858 Split-Seconds Chronograph, aside from the rattrapante function, is the central colimaçon (snail-shaped) tachymeter scale, a function that normally appears on the bezel or periphery of the dial. Its placement here mimics the tachymeter design used on a historic Minerva military chronograph from the 1930s. The spiral shape means the scale is longer, so it can measure a length of time up to three minutes instead of the usual one minute. There is also a telemeter function on the periphery, another common feature of vintage Minerva pieces.

The homage to heritage extends to the movement, which was inspired by the Minerva caliber 17.29, developed in the 1930s. The new caliber MB M16.31 is a split-seconds chronograph monopusher with two column wheels, a horizontal coupling system and a power reserve of 50 hours. It reproduces the signature Minerva arrow and V-shaped chronograph bridge (patented in 1912). Because the movement is manually wound, there is no rotor blocking the view through the caseback, which reveals bridges and plates made of German silver coated with 18-karat gold and with circular graining and Côtes de Genève finishes. In accordance with traditional Swiss techniques, the stalks of the local gentian flower were used to achieve the final polish, while the split-second mechanism is positioned in the centre to allow more light to shine on the movement.

The cathedral-shaped hour and minute hands and Arabic numeral are almost identical to those on the original Minerva, but the lume treatment is thoroughly modern. The numerals are not just coated with Super-LumiNova but entirely composed of the glow-in-the-dark material, giving them a solid, three-dimensional profile without any raised outlines.

The 44mm x 14.20mm chronograph (around £36,000) is limited to just 18 pieces and comes with a vintage green nubuck alligator leather strap finished with beige stitching to reinforce the vintage look. The dial is the same colour as the 18-karat lime gold case, with a sunray finish and discreet, fairly small, hash marks and numerals on the subdials for small seconds and chronograph minutes.