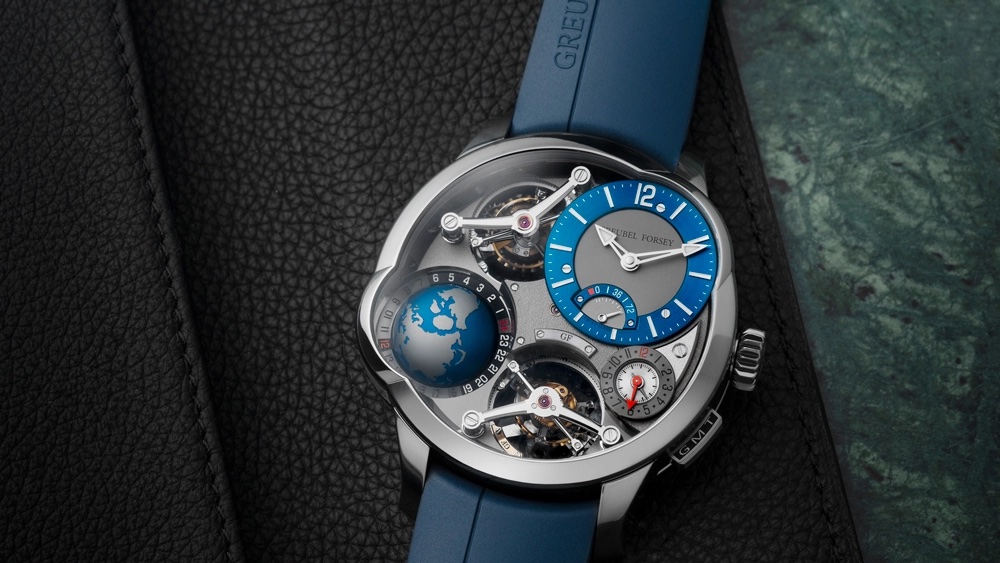 Greubel Forsey, masters of the 3-D, multi-layered dial approach to watchmaking, introduced the first version of this highly embellished GMT in 2013, including a spherical globe. In addition to providing a 24-hour universal time display, it included a 24-second tourbillon inclined at an angle, a Greubel Forsey signature. The concept was elevated to the next level in 2019 with the GMT Quadruple Tourbillon in white gold with two double tourbillons instead of one. The new version launching today is titanium instead of white gold, with new colours and finishes on the dial and movement that alter the look – when a timepiece has as much going on as this one does, colour and finish changes can make a big difference. The case material is also a game-changer. On a watch this big – 46.5mm wide x 17.45mm thick – titanium, which is much lighter than gold, has the power to truly enhance wearability.

While tourbillons are hardly a necessity these days, they do add serious horological fireworks to this piece. The two double tourbillons, positioned at 11 o’clock and roughly 5:30 on the dial, each consist of an outer cage inclined at 30 degrees that rotates once every minute. Nested within that is a second, horizontal cage that rotates once every four minutes. The idea is to average out positional errors due to gravity in all situations, which means no matter what position your wrist rests in, it will remain accurate. Including two double Tourbillons doubles down on the effort, and just to make sure it works, and to prove how serious Greubel Forsey is about chronometry, it uses a spherical differential to average out the timing rate of the four tourbillon cages. 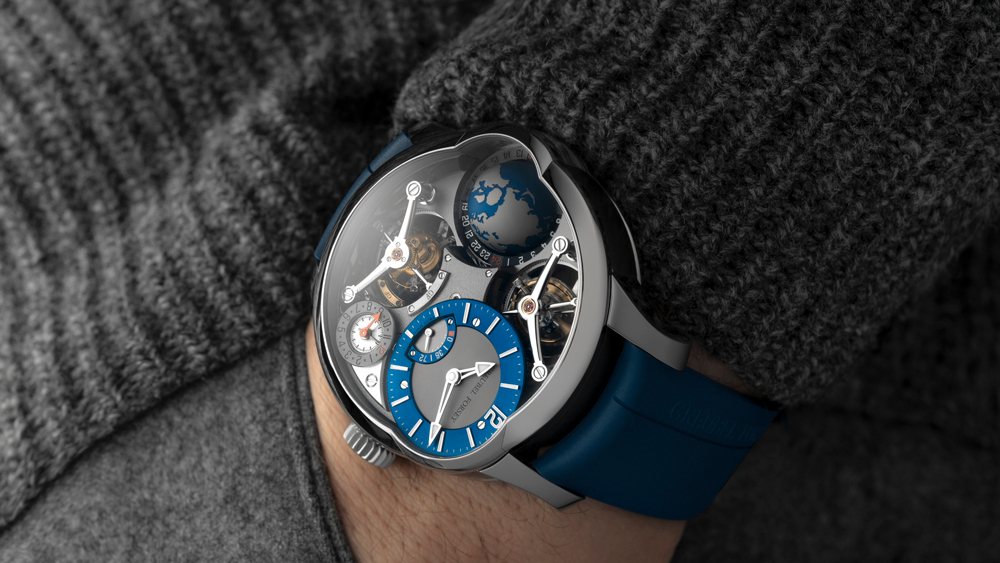 Greubel Forsey is equally scrupulous when it comes to finish. New hand-finishing details were specially created for this version, including the circular-grained hour ring with polished bevels and the 72-hour power reserve arc, both of which appear for the first time in a brilliant blue. The applied hour markers are gold. The mainplate is now frosted and spotted with polished bevelling, countersinks and straight-grained flanks, executed in a grey finish. The new bright blue of the hour and minute ring, as well as the power reserve indicator, are matched on the Earth globe at 8 o’clock and on the rubber strap, which replaces the black alligator of the previous series. The result? A brighter, sportier version of the 2019 model.

A 24-hour ring around the globe identifies time zones that use summer time. The GMT second time zone, along with small seconds appear just under the 5 o’clock position on the hour dial, and on the caseback, a 24-city disk makes it a true world timer. The 705-component manual-wound movement is contained in a 46.5 x 17.45mm titanium case, with an asymmetrical convex sapphire crystal. Needless to say, it’s one hell of a watch with a price tag just shy of £600,000 to match and only 11 collectors will be able to get their hands on one.