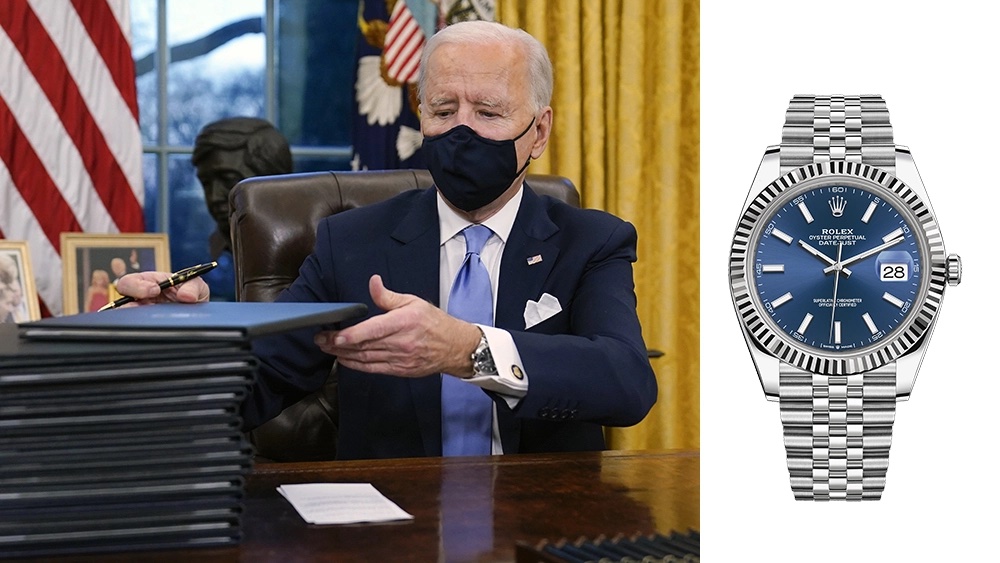 The crown reigns again. President Joe Biden was spotted wearing a Rolex Datejust on his wrist as he was sworn into the US government’s top gig.

The watch was also present during his first moments in the Oval Office, when Biden signed 17 executive orders addressing everything from the coronavirus and the environment to workplace discrimination and the census. The Oystersteel and 18-karat white gold 41 mm model, housing the caliber 3235, boasts 70 hours of power reserve. It’s mounted on a jubilee bracelet and a sports very presidential blue dial. It comes with the company’s instantly recognisable and magnifying cyclops-lensed date window, to give the president a better view of a day to remember. In the past, Biden has been spotted wearing an Omega Seamaster Professional 300M and an Omega Speedmaster Professional Moonwatch. The Rolex is a cherry on top of his official step into the role as America’s 46th president.

While his counterpart, Vice President Kamala Harris, chose a W.Rosado pearl necklace set in gold and accented in subtle diamonds designed by the American jeweller Wilfred Rosado as her accessory of choice, Biden’s decision to wear a timekeeper by a Swiss company isn’t outside of tradition. Former presidents Dwight D. Eisenhower, Lyndon B. Johnson, and Ronald Reagan all wore a Rolex. There’s even one depicted in the Kehinde Wiley of portrait of Barack Obama that hangs in the National Portrait Gallery.

Like Biden, John F. Kennedy also wore an Omega (which the brand purchased at auction for $350,000, or around £255,000, in 2005). Donald Trump was occasionally pictured wearing a gold Vacheron Constantin Historiques 1968. Our first president, George Washington, was said to have worn a watch made by Jean-Antoine Lépine, watchmaker to King Louis XVI, ordered from Paris. Abraham Lincoln, however, was one president who wore an American-made timepiece. He chose a Waltham pocket watch.

President Biden’s Rolex Datejust is a modern precision timekeeper that will, no doubt, keep the President on top of his tight schedule (plus, his particular version goes well with the American head honcho’s requisite blue suit, made for him by Ralph Lauren for his inauguration). However, he might soon find that a world timer might be more his speed as he juggles phone calls and meeting with leaders around the globe.