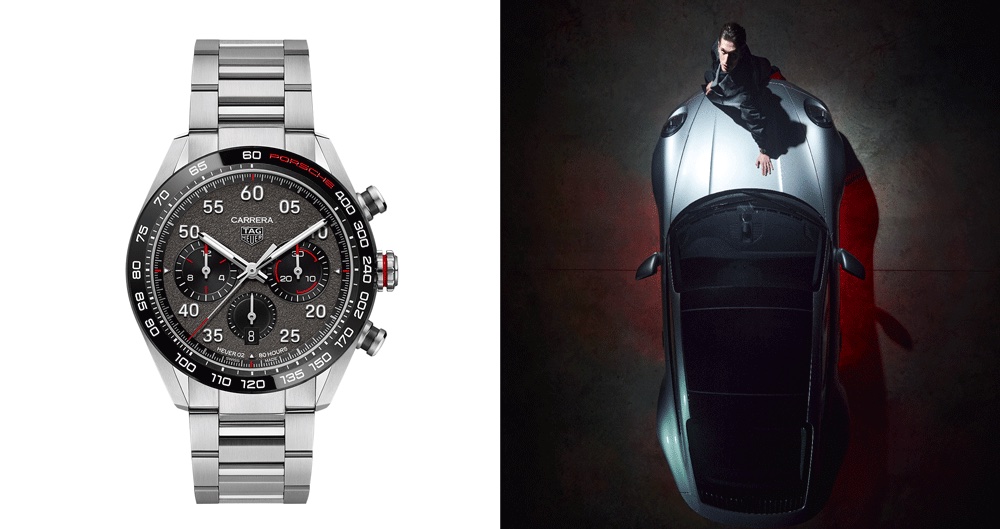 Tag Heuer is moving full-speed into 2021. The brand has announced a long-term partnership with Porsche. The Swiss watchmaker and German sports car manufacturer have already teamed up on a new Tag Heuer Carrera Porsche Chronograph, but the collaboration will also extend beyond product development into competitive racing.

While it’s not the first time Tag Heuer has linked up with a high-end automaker—previous collabs include Aston Martin (2018-2020) and Ferrari (1971-1978)—the deal with Porsche is a bit of a full-circle moment for the two brands. They both share “Carrera” as a pillar name in their lineups. Not long after the first car was built under the Porsche family name in 1948, spearheaded by Ferdinand “Ferry” Anton Ernst Porsche (son of founder Ferdinand Porsche), racer Hans Herrmann had a class win in the Carrera Panamerica race of 1954 in a Porsche 550 Spyder that led to the brand’s most powerful engine, dubbed the “Carrera.” Not long after, in 1963, Jack Heuer, debuted the first Heuer Carrera chronograph—specifically designed to allow drivers to quickly tell the time in the heat of a race.

The new Chronograph merges the two together, without overdoing it on branding. The Porsche logo is featured on the bezel, rather than the dial, but otherwise there are hardly any overt references to a car theme other than an oscillating rotor, visible through the sapphire crystal caseback, crafted to look like a steering wheel and printed with both brand names. More subtle references including an asphalt effect on the grey dial or the traditional red, black and grey colour scheme inherent to Porsche, a palette also shared by vintage Heuer models. The 44 mm steel chrono (£4,850 with a leather strap and £5,000 with a bracelet), is powered by the in-house caliber Heuer 02, is equipped with 80 hours of power reserve and features a vertical clutch and column wheel construction for extra precision.

But according to longtime Tag Heuer brand ambassador, actor, race car driver and Porsche collector, Patrick Dempsey, who spoke exclusively to Robb Report, the watch has one big noticeable difference from previous Carreras. “You know what I love about it? First of all, the tone and the colour, but it’s also so lightweight,” says Dempsey. “I kid you not, I fell asleep with it on my wrist last night and I just received it yesterday. The Carrera can sometimes be a little too heavy, in my opinion, but this one is really perfect.”

He would know. Dempsey has been a part of the Tag Heuer family since 2015 and has worn more than his fair share. He’s currently alternating between the new chronograph and taking Tag’s Connected Smart Watch for a spin. As someone who appreciates the classics, the new technology has been harder to embrace. “I was a little resistant to that because I really love the heritage and the classic watches, but in order to better understand the brand I had to lean into it. I’m actually using it a lot more than I thought I would and I really like it.” He has a collection of vintage models in the vault as well, including a ’72 Heuer Monaco, and an Autavia and is on the hunt for a Carrera, so that he can lay claim to Heuer’s “big three.”

But when it comes to Porsche, he has been collecting since his first big paycheck in Hollywood. One of his first was a 1963 356 Cabriolet, which he says he purchased with his entire paycheck in 1988 after filming Can’t Buy Me Love. “I’ve had a lot of cars since then, but another favorite is a 72 T 911,  in the communication color of that year which was tangerine,” says Dempsey. “It’s a very special car. I’ve bought and sold some of my cars, but the one I’ll never part with is the 356.” You might be surprised to hear that Porsche once made tractors. Dempsey keeps a vintage model, which he uses at his farm in Maine, and is currently debating whether or not to restore it. If he does, he will certainly have the right resources at his fingertips.

Aside from the fact that Dempsey is already a natural fit for the new partnership (he was also named the face of Porsche Design Eyewear last month), the two brands have such a rich shared history it’s a wonder it took until 2021 for the two to officially join forces. (The brands are remaining mum about the actual length of the collaboration, but it is said to be for an extensive time period.) Below is a look at some of the historical ties that have linked the two icons as far back as the turn of the 20th century.

-Both Heuer and Porsche won medals at the Paris World Fair, 11 years apart—Heuer for the first manufactured chronograph in 1889 and Porsche for the invention of the electric wheel-hub motor in 1900.

-The Heuer Monaco, the first square-faced automatic chronograph, was named after the Monaco Grand Prix, the famous automotive race which Porsche won for three consecutive years from 1968 to 1970 with the 911.

-In the late ’60s Tag Heuer struck a deal with race car legend and Porsche dealer Jo Siffert, who wore their logo on his car and suit in exchange for a cool sum of CHF 25,000. The partnership is said to be the reason Steve McQueen chose to wear Heuer while driving a Porsche 917 in the legendary Le Mans flick in 1970.

-In the mid-1980s, Tag Heuer—the acquired name of Heuer after it was sold to Tag Group—developed and produced the Tag-Turbo engine with Porsche that powered the McLaren team to win two consecutive F1 titles with Niki Lauda in 1984 and Alain Prost in 1985.

-In 2019, Porsche created its Formula E team with Tag Heuer, a founding partner of the Formula E Championship, as the title and timing partner.