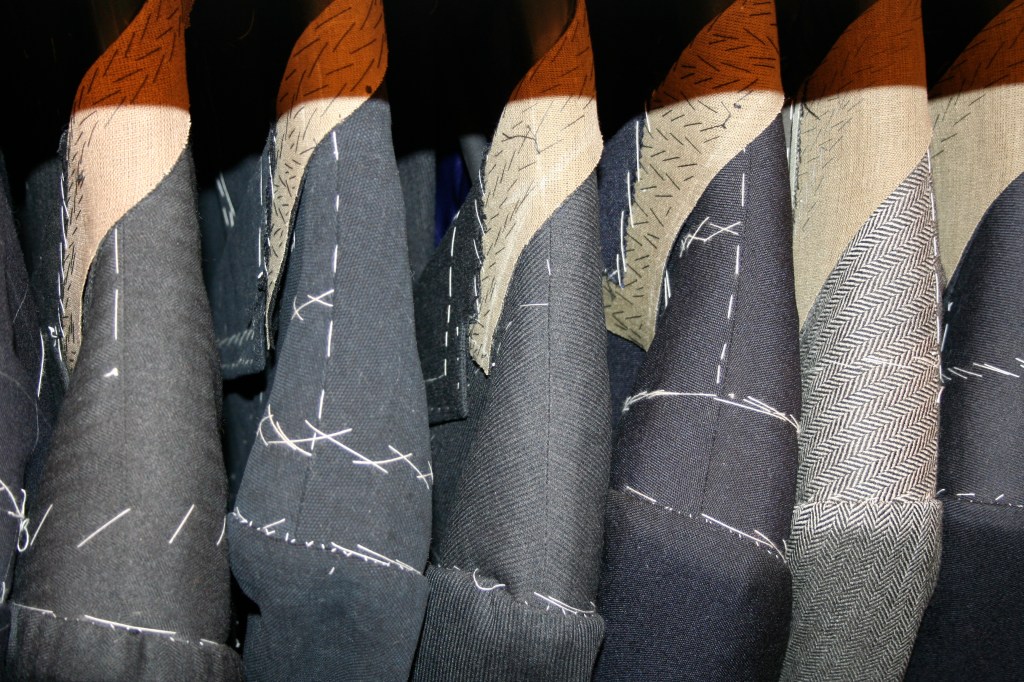 Tailoring is like test cricket: the more you learn about it, the more you realise there is to learn about it – and the more hungry you become to find out more. And, a good basis for a catholic understanding of the subject is to grasp the distinction between the two very distinct schools found in two of its major global hotspots, London and Naples.

With that in mind, we asked two giants of those two sartorially refined milieus  to describe the different stylistic nuances, how they came about and what they mean to them personally.

NEAPOLITAN TAILORING – AN INTERVIEW WITH GIANLUCA ISAIA
When exactly does Neapolitan tailoring’s rich narrative begin? Perhaps with the formation, in 1351, of the Confraternita dell’Arte dei Giubbonai e dei Cositori (Brotherhood of the Jacket Makers and of the Tailors)? The Brotherhood would meet up regularly in a gothic chapel in Naples (then the capital of the Kingdom of the Two Sicilies) and hammer out the core principles that would go on to define the city’s artisanal tailoring tradition, in the process giving birth to the region’s wool- and silk-weaving trades.

Gianluca Isaia, CEO of one of the city’s prime Neapolitan sartorial brands, believes that its formation was more gradual. “We can’t establish a specific period in which Neapolitan tailoring begins because there is no historical trace of it,” he says. “We can say around 14th century because in that period the modelling of the clothes began to change into a much more linear one.” 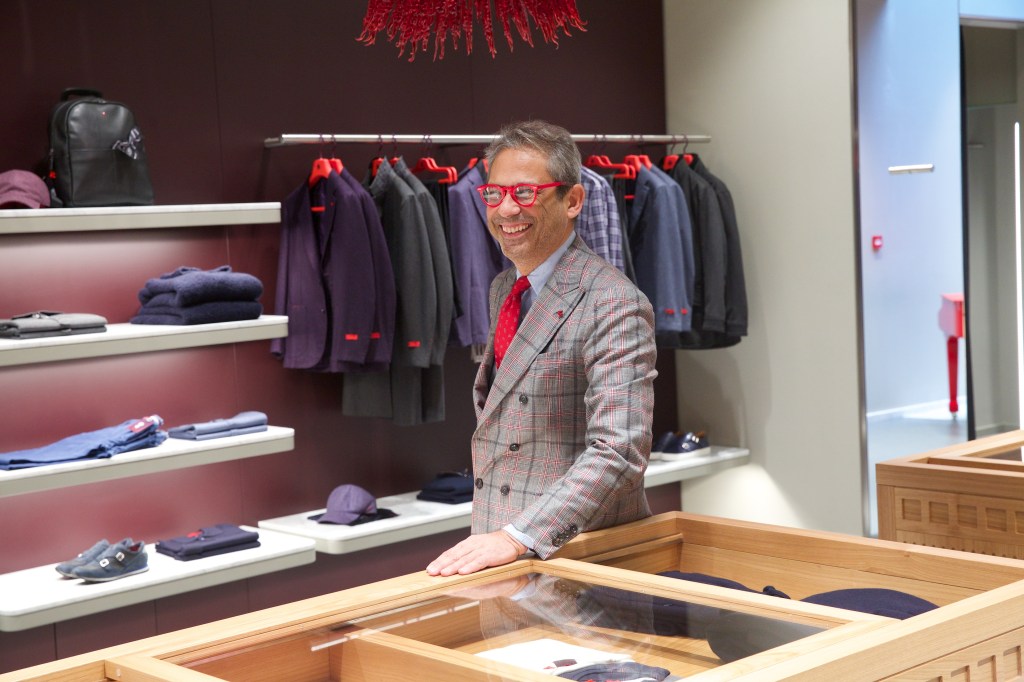 It was several centuries later, in 1957, that Gianluca’s grandfather moved the eponymous family business to Casalnuovo, cherry-picked the best tailors from this small town on the edge of Naples and, with his sons Enrico (Gianluca’s father), Corrado and Rosario, created a workshop that he hoped would send Neapolitan sartorial values and practices soaring to even loftier heights.

By now, Neapolitan tailors had adapted conventional Savile Row suiting styles into something which, to this day, its proponents affectionally describe as ”Light as the breeze that blows over Vesuvius.”

“The typical Neapolitan jacket is light and deconstructed,” says Gianluca, referring to the lack of padding and lining involved. “Some of the more recognisable details are the boat-shaped breast pocket, ‘moustache’ collar whereby a little extra fabric is hand-sewn on the front under-collar, a small and very high armhole, tiny shoulder pads and so much more.” 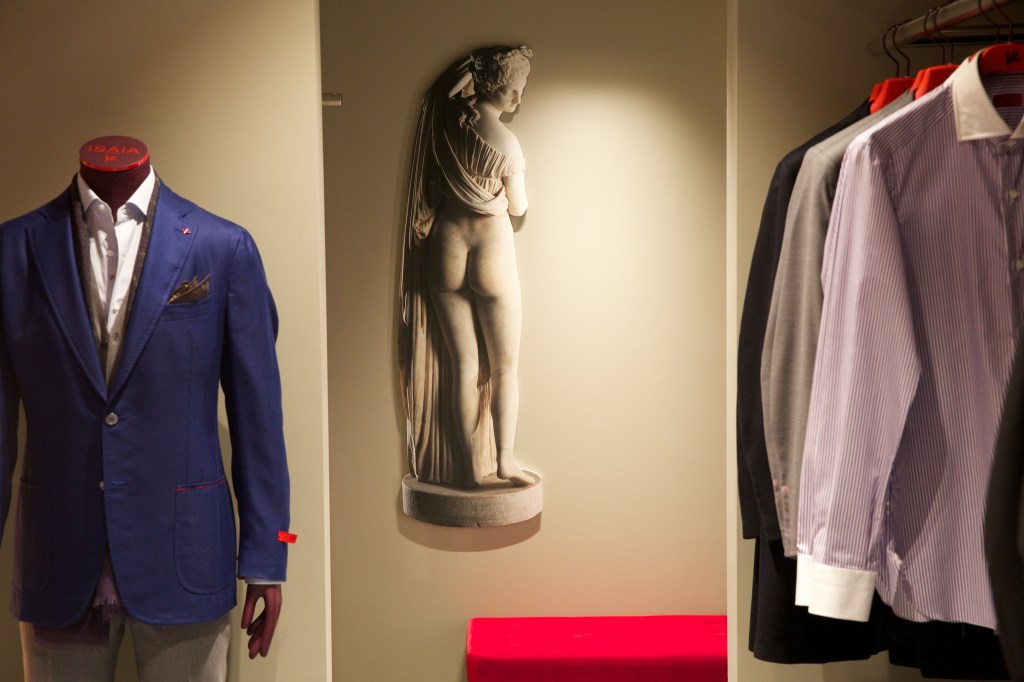 Isaia prides itself on a unique approach to a time-honoured suiting genre: “For the continuous pursuit of extra detail, and for the originality of shapes and colours, we use refined fabrics combined with local production methods – all the garments are entirely produced in the factory of Casalnuovo di Napoli,” says Gianluca. “We combine Neapolitan tailoring tradition with the kind of exclusive product knowledge that’s appreciated all over the world. Neapolitan tailoring is not a moment in fashion – it is eternal. Our approach is to make the customer feel comfortable and confident in his own skin and to create his own style.” 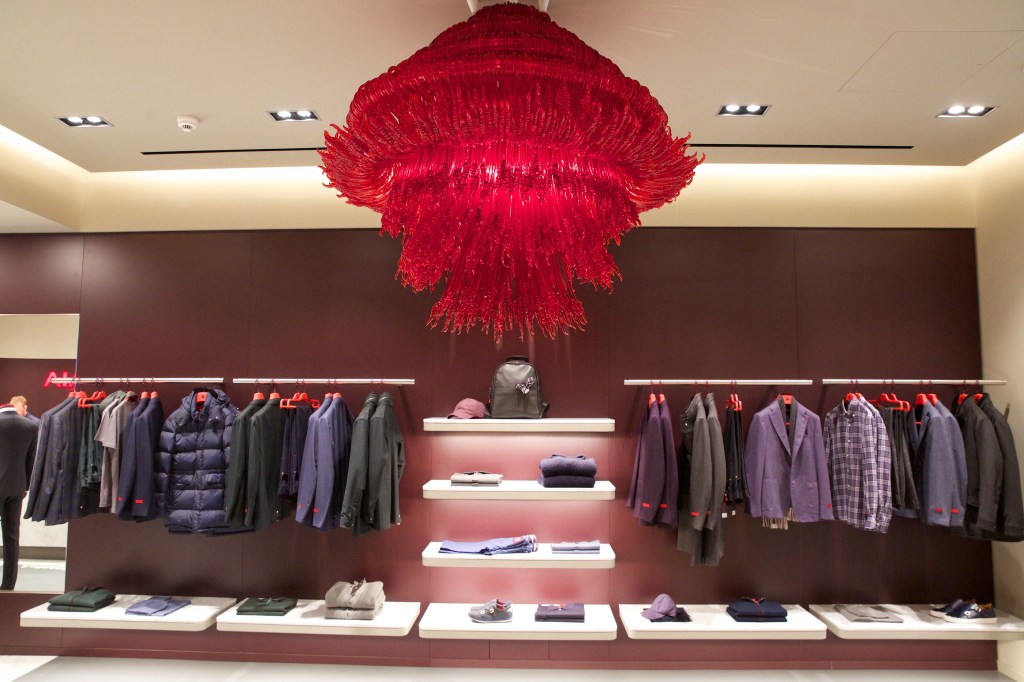 A surprisingly little known fact is that Savile Row wasn’t always the home of tailoring: “These lovely town houses used to be occupied by doctors and surgeons,” says Richard Anderson, who began his apprenticeship with Huntsman – one of the oldest and most revered houses on the street – aged just 17. “It was the son of Henry Poole, after whom Number 15 is still named, who turned things around – literally.

“His father was a military tailor making uniforms for the Napoleonic Wars, who in 1828 had purchased numbers 4 and 5 Old Burlington Street. When Henry Junior took over the business in 1846, he decided to make the Savile Row back entrance the main entrance. The local medical community was appalled, and moved over to Harley Street, where they remain to this day.”

The military styling Poole introduced, says Anderson, became the basis for classic Savile Row suiting: “very close, form-fitting cuts; narrow, close to the leg; high armholes to help the wearer hold up weapons with ease; and, of course, structured shoulders – a phrase which refers to a more padded look with stiffer canvassing inside. If you look at the overall silhouette of this style, it’s conducive to standing to attention.” 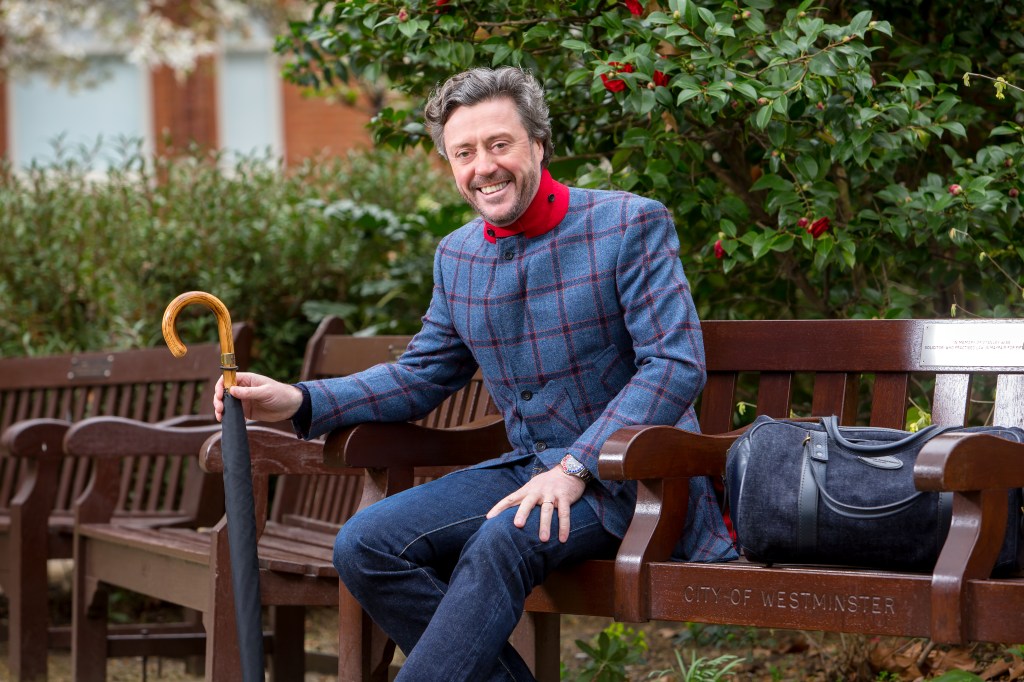 It was Beau Brummel, the sartorial advisor to The Prince Regent, who spearheaded a dandy-ish shift towards brighter, more colourful garments and exotic materials such as velvet. Shortly after that, The Row started drawing international visitors – Emperor Napoleon III, Emperor Wilhelm I of Prussia, and later Crown Prince Hirohito of Japan and all the American financial pioneers. Since then, it’s drawn people of all ilks from all over the world – royalty, politicians, artists, captains of industry, movie stars and – not least – rock stars, the last of whom particularly enjoyed the work Tommy Nutter did in embracing the new paradigms of men’s style in the 60s and 70s: the wide shoulders and bold lapels, extravagant patterns and so on.

Throughout all the above, Anderson points out that certain core tenets of that original military style have remained firmly in place. “Methods have stayed largely the same – I still construct a suit pattern exactly the same way my masters did 60 years ago,” he says. “A modern tailor puts his own individuality into it – a tweak of lapel width here; an adjustment of the length there – but the A-Z of how to construct the clothes has never changed. 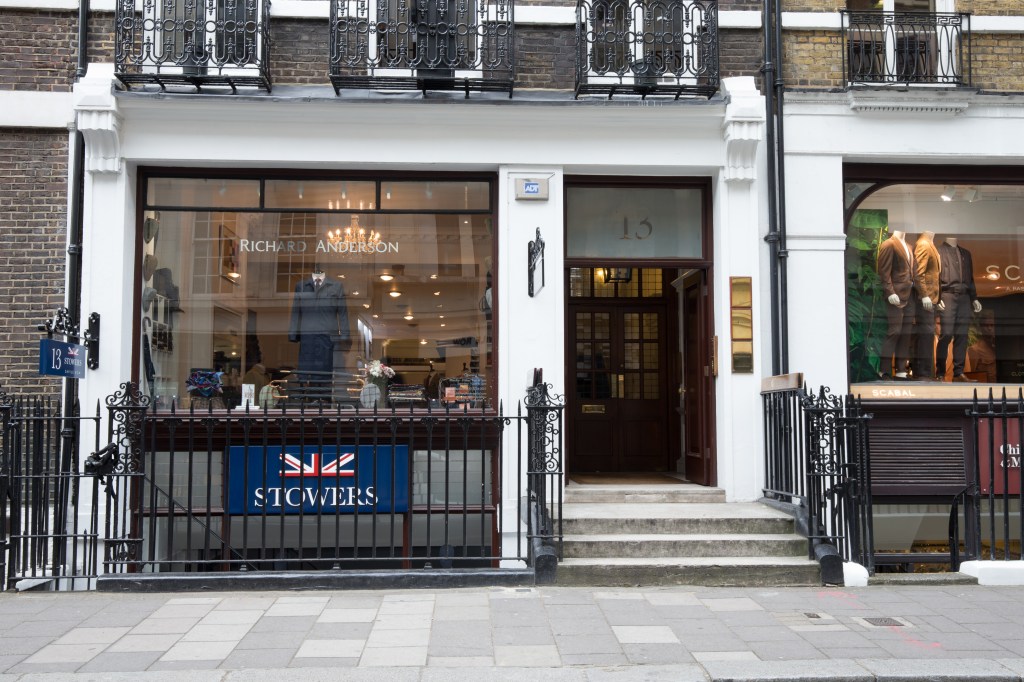 “That’s all part of why Savile Row remains a special, unique place – the name itself still sends shivers. Staff in this neighbourhood accept or reject job offers on the basis that it might involve moving to, or away from, The Row itself as a place of work. It deserves its reputation – but must work to keep that mystique alive. You have to stay relevant.”

So which is more elegant – Savile Row or Neapolitan tailoring? “I’d say it’s entirely subjective, and also down to lots of variables – who is wearing the suit, how and where… And that’s just the start of it. It’s fair to say though that both schools – as long as they maintain respect for their traditions yet proactively try and shape the future of tailoring – will remain tailoring powerhouses for the foreseeable and way beyond.” 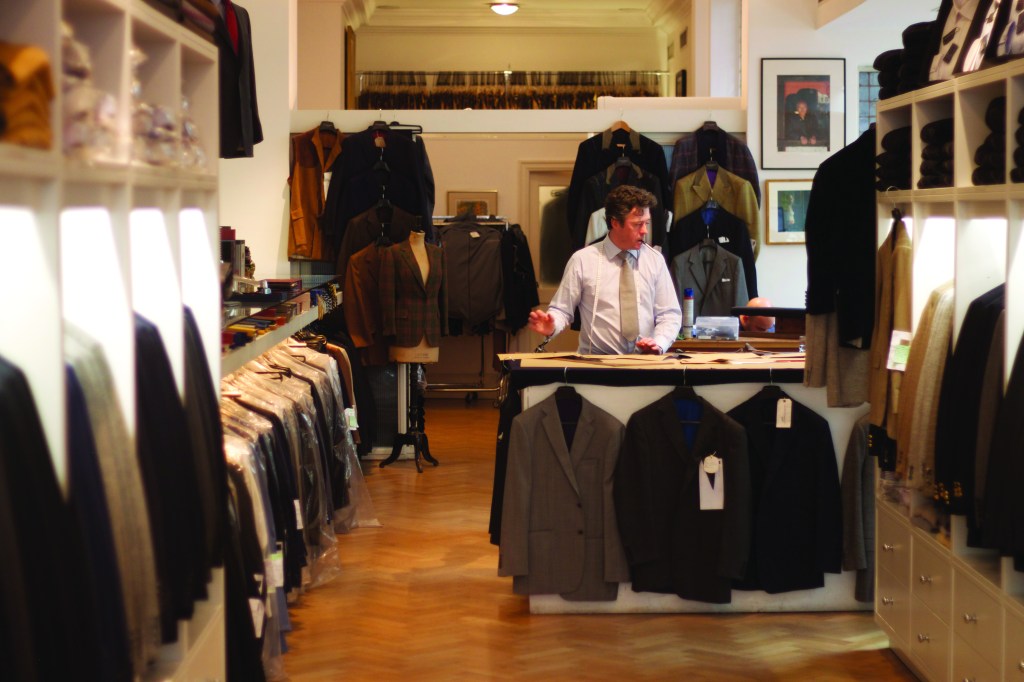