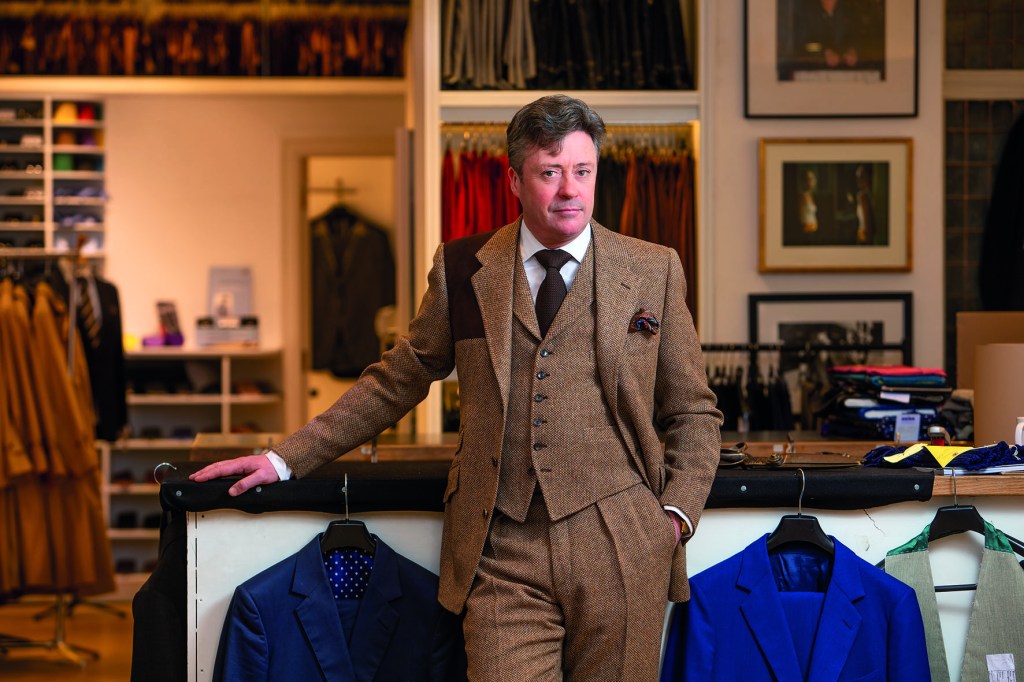 It was a very different Savile Row from the one today which, aged 17, Richard Anderson walked down to begin his apprenticeship with Huntsman – one of the oldest and most revered houses on the street. “It was 1982 going on 1932,” he says – “run with rigid, old-fashioned discipline. You were constantly spoken to in a curt manner, and you had to think on your feet, but I loved the challenge of it.”

Just shy of 20 years later, in February 2001, Anderson set up shop separately, at Number 13 Savile Row, with his friend and colleague, Huntsman’s then Managing Director Brian Lishak (now a Row veteran of 65 years who can vividly recall, early in his tailoring career, taking four-and-a-half month trips to America, crossing the Atlantic by boat and then criss-crossing the country on sleeper trains, measuring up customers in all the major cities).

To say Anderson and Lishak are still going strong on The Row would be an understatement: “Just before Covid, we doubled our footprint and expanded into the basement,” he tells Robb Report. “We haven’t had the opportunity to use the space to its full potential as of yet, so I’m excited to invest in it…”

It’s safe to assert that, when doing so, Anderson will apply a fair bit of accumulated experience to the enterprise… Nick Scott

You have to think of tomorrow. After working many years at Huntsman, it became clear to me that Savile Row was missing the opportunity to service a wider demographic. When Brian and I decided to take the plunge and open our own tailoring house down the street, a number of people on The Row thought we were mad. We wanted to take the tradition and quality that the older tailors had established and add some flare, some newness, that would appeal to a younger generation.

Anderson was a pioneer of the open-plan tailoring establishment

Things fluctuate on The Row – a lot. In our 20 plus years at number 13, we’ve seen menswear brands open and close stores, we’ve seen the more traditional of tailoring houses renovate their stores and expand their product offering and – sadly – we’ve seen a number of houses close.

You mustn’t change your own basics though. When we opened, we wanted to have a much more welcoming approach to tailoring including a more egalitarian, open-plan premises. We painted our store white, and introduced our first artworks. My first commission was with an old school friend who painted a traditional Hunting Scene, giving a nod to mine and Brian’s history working at Huntsman. Since then we’ve worked with famous British Pop Artist Colin Self and with photographers such as Perry Ogden, Glen Luchford and Phil Poynter, all of whom are long-standing clients and friends. We’re often questioned by clients about the significance or story behind each piece.

High armholes, Padding in the shoulders, but no rope to the sleeve-head – Anderson’s trademark cut

We also made sure our tailors were visible to our customers while working. Removing the secretiveness that ruled Savile Row for as long as I can remember was a well-received approach and still is. From the start, we wanted to alleviate the intimidation especially younger, more fashion-conscious customers felt coming to a traditional tailoring house.

Ubiquitous appeal is crucial. Over the years, weathering the storms caused by the Global Financial Crises, Brexit, Covid and US tariffs, one thing that remained apparent is that a product has to work globally. Like many of our neighbours, we’ve had to adjust – by expanding into ready-to-wear, as a stepping stone for customers towards bespoke, for example.

The Row is no longer a gentleman’s club. It’s great to see more tailors offering women’s bespoke pieces – we’ve seen much more appetite for it in the past five years. Women no don’t just want tailored outfits – they want to push the boundaries with what they wear and invest in pieces that make a statement about their personal and working lives.

Anderson and his (equally dapper) sons

Climate change has affected our output. When I started working on Savile Row the weight of fabrics was much heavier – tweeds were our primary focus. Because of climate change, and also due to an increase in customers from all over the world, we’ve adapted to working with lighter-weight fabrics. For me it’s been an exciting venture – it’s presented a chance to trial new designs, push the boundaries a bit more.

Experimenting with designs is key – and something I’ve always been open to. Consumer habits have always, and always will, drive trends in our design philosophy. An example is our Hudson travel jacket: its pockets are twinned with two handwarmer pockets for warmth but also for holding glasses, pens or travel documents. There are poacher pockets inside with a tab and button, two inside pockets and a practical back-neck ticket pocket. It’s available in a tweed as well as a lightweight turquoise cloth, making it suitable for wherever you’re travelling in the world.

The sustainability issue has driven demand for bespoke suiting. People are more inclined these days to invest in an item that they know will last a lifetime. They’re conscious of where cloth is manufactured and more likely to want to support local businesses whose service and products align with their own personal beliefs.

The future of Savile Row is dependent on the introduction of new blood… We have a new team of enthusiastic tailors to train, and the addition of my daughter Molly to the business is bringing a fresh new perspective.

…but certain time-honoured traditions, too. The Row’s fame was built over a period of roughly 300 years – from The Restoration to World War II, when British style dominated men’s clothing. It has to be a unique experience, from the moment you first arrive in the shop to when you leave – one which will totally differ from buying a suit off the peg in a high street store.

The Savile Row customer is changing. They’re now younger, more daring, and more and experimental with cloths, colour and cuts.

The death of the suit? Don’t bet on it. Yes, we’ve come out of a two-year hiatus of not working in the office or attending occasions, and I can see that clients are requesting singular jackets or trousers that they can mix and match. But I strongly believe this is an interim period – we’re already seeing an increase in demand for suits, especially with the wedding season upcoming and people returning to the office. The ‘traditional’ suit will adapt – and thus not become extinct.

Some of the old-school ways and mannerisms of Savile Row will never die – and nor should they – but we need to continue to adapt. A welcome and open approach will ensure a new generation of tailors take over, and that gentlemen and women looking to invest in a bespoke suit for the first time feel will feel welcome doing so.