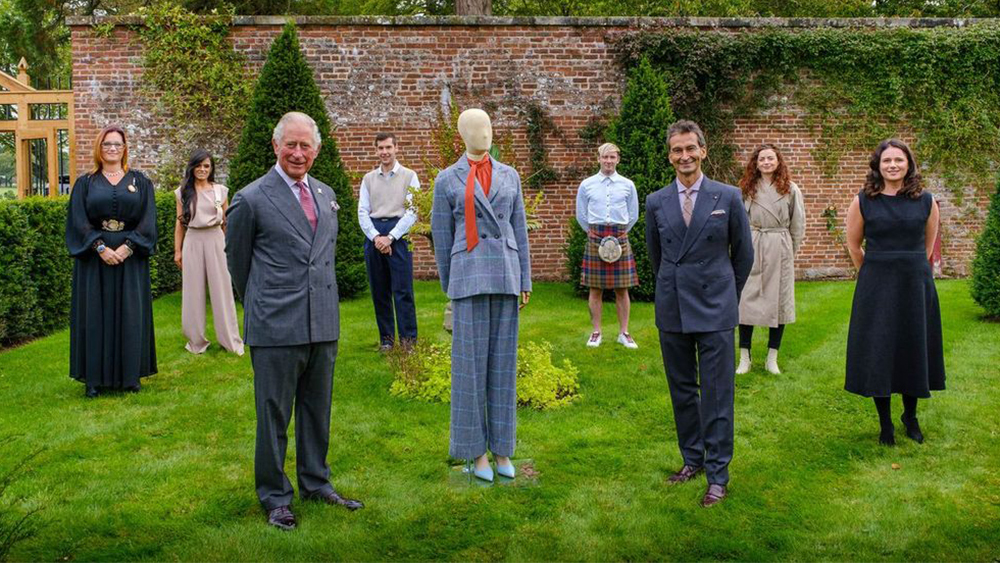 In our increasingly techy times, pieces with a human touch are the greatest luxuries. For all the 3-D printing and blockchain innovation out there, a handsewn buttonhole still can’t be beat. Preserving old-school craftsmanship is top of mind for Federico Marchetti, chairman and CEO of Yoox Net-A-Porter group (YNAP) and purveyor of luxury duds to some 4.3 million shoppers worldwide. It’s also a passion of His Royal Highness the Prince of Wales, whose Prince’s Foundation offers education in a wide range of traditional arts and crafts.

After discovering their mutual cause, the two men joined forces to create the Modern Artisan project, enlisting students of fashion and textile design in the United Kingdom and Italy to immerse themselves in the sartorial heritage of both nations. Now, their studies have culminated in a first of its kind collection—designed in Italy, crafted in Scotland and sold on Mr Porter, Net-a-Porter, Yoox and The Outnet—that is an ode to artisanal know-how.

“The artisan producers and makers that have long supported our luxury fashion houses with skills perfected over lifetimes are gradually retiring and risk not being replaced by the next generation,” Marchetti says of the impetus for launching the project. Even with such reverence for the traditional way of doing things, Marchetti is clear on the need to modernize. “It’s critical that we learn from tried and tested skills,” he tells us, “but also that we understand the importance of sustainability, embracing the power of technology and adapting to the changing priorities of the customer.” 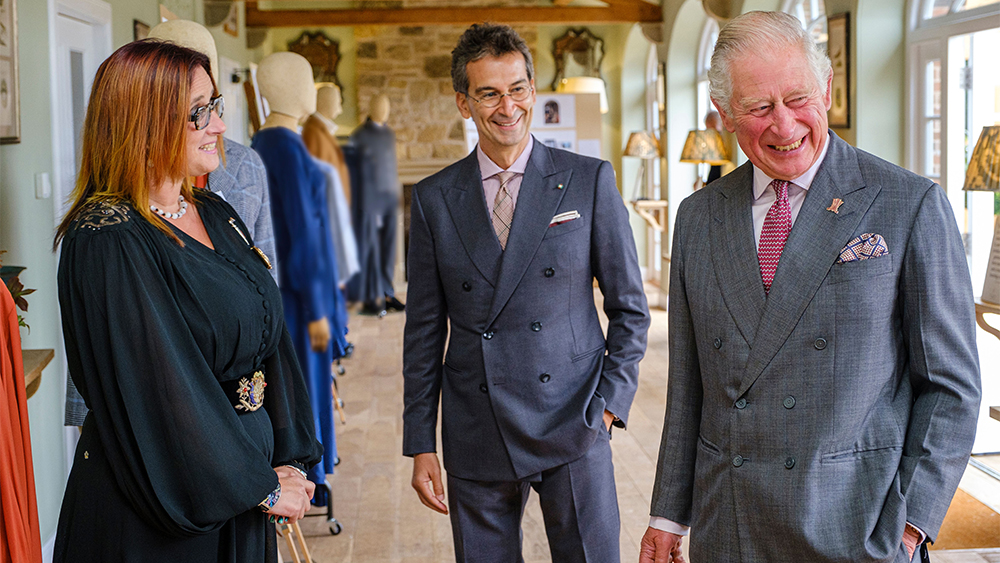 Jillian Halfpenny, one of the British artisans, with Federico Marchetti and HRH the Prince of Wales. Mike Wilkinson

The students—six from Milan and four from the UK—were given access to YNAP’s data on consumer preferences going back five years to help conceive their designs. And on the sustainability front, ethically sourced cashmere and wool were supplied by Scottish stalwart Johnston’s of Elgin, organic silk came from Italy’s Centro Seta and no synthetic materials were used. Furthering the collection’s virtuosity, all of the profits from its sale will be donated to the Prince’s Foundation to enable future programs that preserve traditional handcrafts.

To understand all that went into the Modern Artisan collection, we asked two students responsible for one of the menswear standouts—an elegant merino wool and cashmere topcoat—to walk us through its creation. 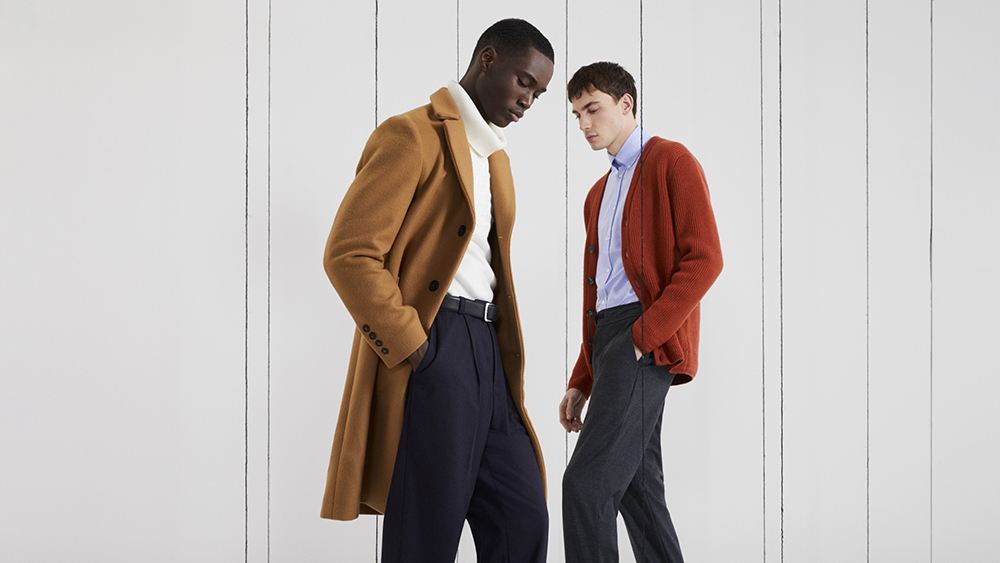 “The coat was a key garment in the collection from the beginning,” says Alice D’Andrea, a student of Politecnico di Milano who lead the coat’s design. The general features were influenced by YNAP’s data, which she says “revealed that the best-selling menswear coats were all single-breasted.” For her part, D’Andrea drew inspiration from the godfather of Italian craftsmanship, Leonardo Da Vinci. “We added the contrast binding inside, revealing the structure and architecture of the coat,” she tells us. “This recalls the engineering behind Da Vinci’s work and also exemplifies his attention to hidden details.” 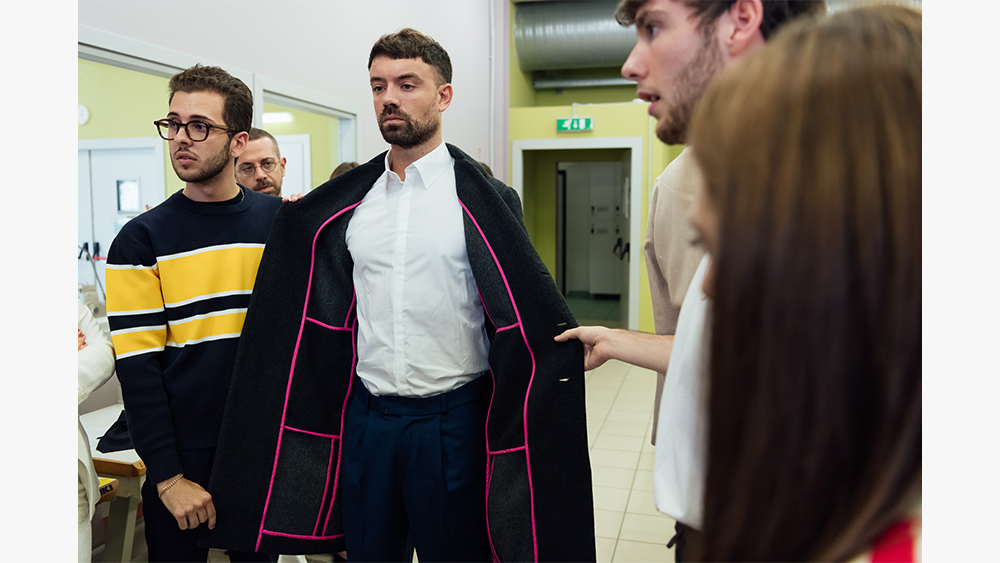 The initial design process took place entirely in Italy, with the students there drafting sketches and building moodboards. “Throughout this process, our work was met with feedback from the Yoox Net-a-Porter buyers and the Prince’s Foundation, which often proved to be very helpful,” D’Andrea says. “We all really grew as designers, since this was the first time we worked with a team that came from a different country and with a different cultural background.” The team in Italy was in touch with the UK team on a daily basis as their design sketches were realised in prototype garments. 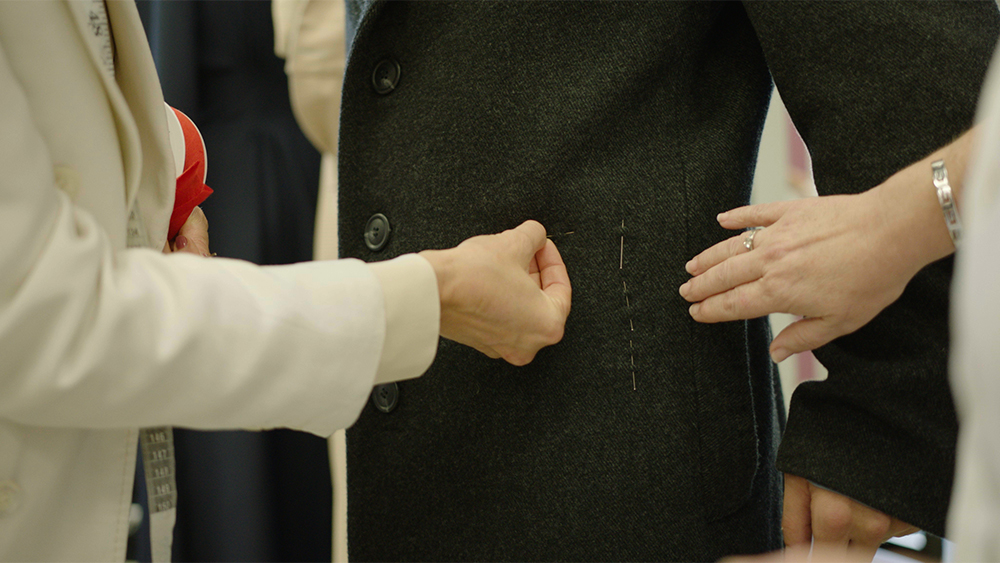 Fine-tuning the prototype before sending it to the UK. Aaron Christian

Once the coat’s prototype was made and the basic pattern was finalized, it was sent off to Scotland where Graeme Bone, a Scottish native and former construction worker, oversaw its construction. “The coat had been designed as a beautiful, bespoke piece but we needed to manufacture several of them in a uniform manner,” he tells us. “While we were committed to staying true to the original design, we did have to make some adjustments to ensure the piece could be replicated…The garments had to be practical and wearable, without losing the aesthetic.” 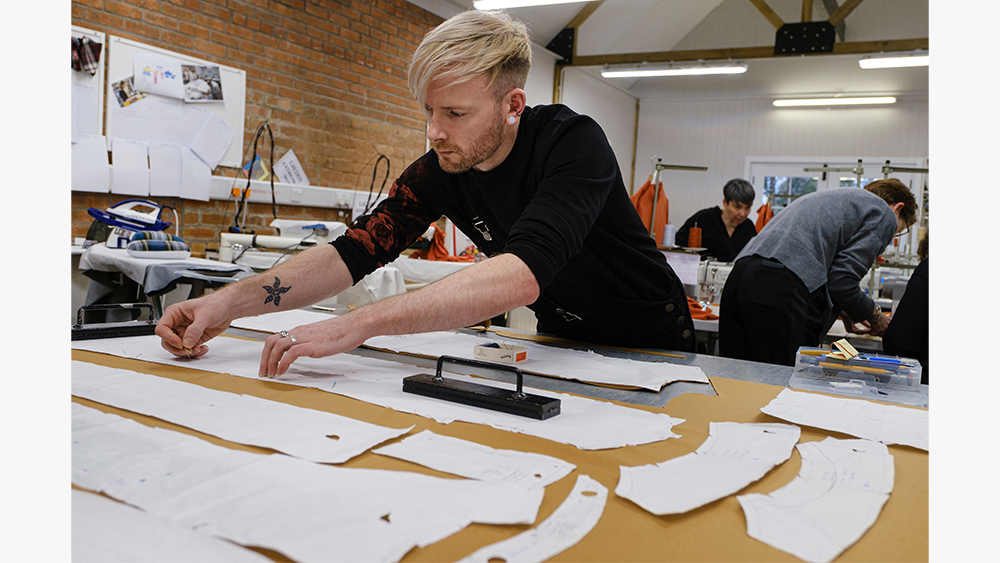 Graeme Bone cutting the coat’s pattern pieces in a merino wool and cashmere blend from Johnston’s of Elgin. Mike Wilkinson

While originally conceived with an elasticated panel along the back, giving the coat a voluminous shape, the UK team was able to achieve the same effect using more uniform pleats. Overall, the coat is constructed from some 60 different elements—from pattern pieces to buttons and trim—and Bone drew on his experience in steel construction to build the coat with exacting precision. From placing the pockets to attaching the sleeves, each part of the coat’s assembly was done by hand. 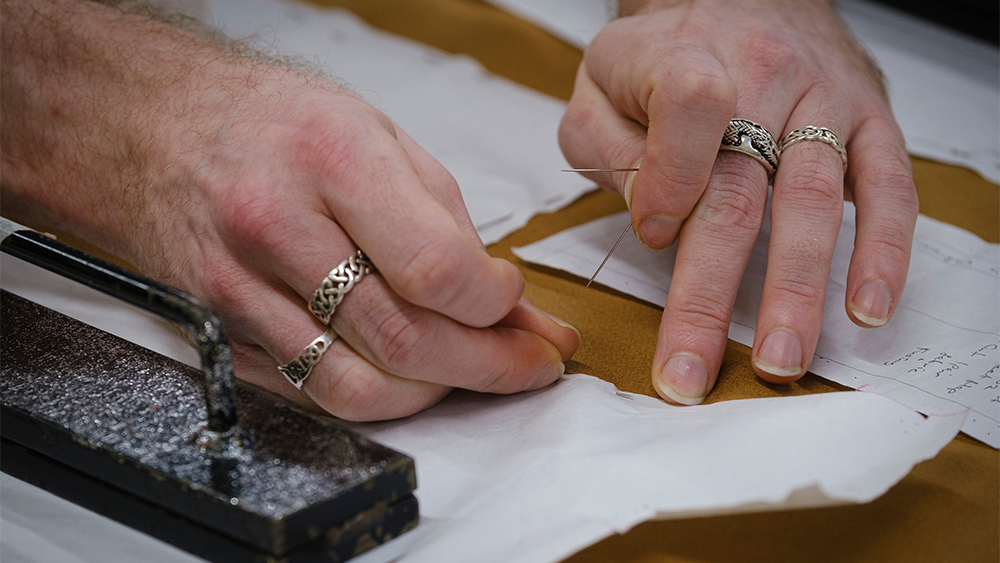 Bone says the coat is a personal favorite because of its “technical interior”. This attractive detail made his work particularly challenging. “Often, lining is used to conceal any discrepancies,” he says. “But since this coat doesn’t have a full lining, we had to make sure everything was perfect—a great lesson in terms of how important detail is when manufacturing luxury garments.” However, it was one of the smallest elements that proved to be the most difficult for Bone: eleven handsewn buttons. “When I first started, it took me about five minutes per button,” he recalls. “But as I refined my technique, I was able to do this in less than half that time by the end of the Modern Artisan project.” 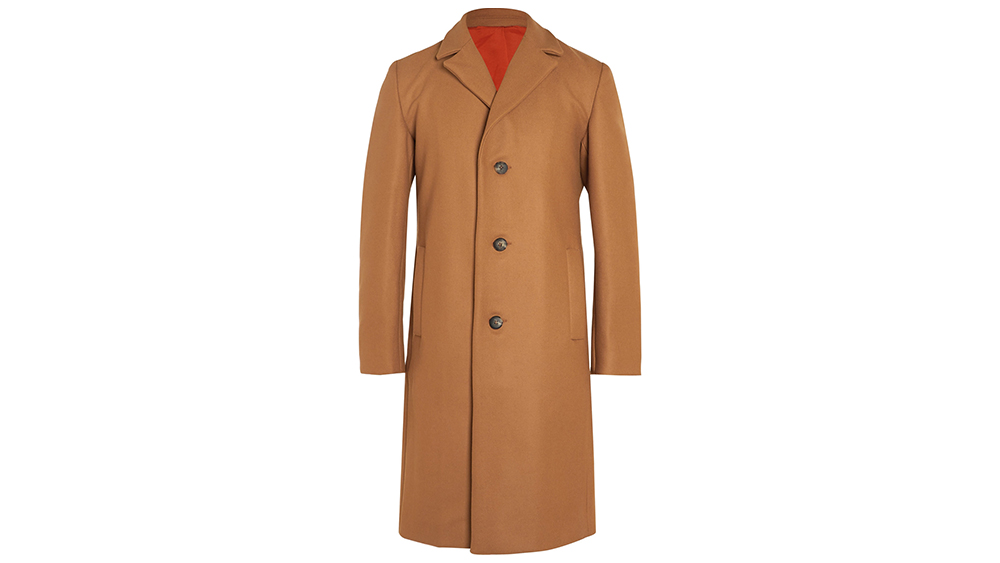