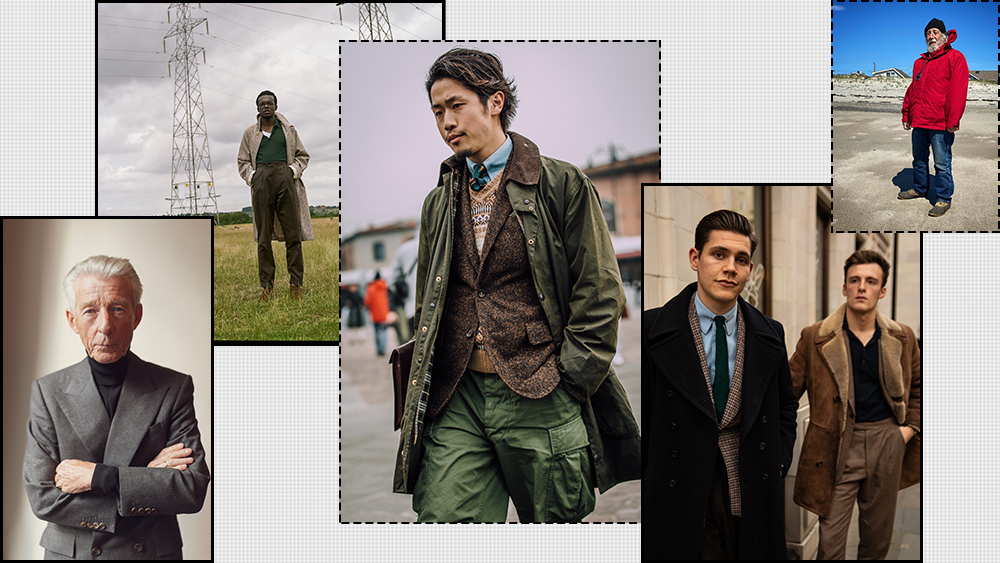 It’s been hard for guys who love dressing well to find outlets for their sartorial enthusiasm recently, and harder still for the photographers who document them in the wild. But with travels on hold and wardrobes being cleaned out, it’s an ideal time to reflect on what it means to express yourself through fashion.

Street style photographers have spent years finding and capturing exceptional outfits. They’ve all honed an eye for the big ideas and small details that make a guy stand out in a crowd. We asked some established and up-and-coming lensmen (all worth a follow on Instagram for further inspiration) to share their wisdom on spotting great personal style along with a photograph that encapsulates their philosophy.

Rikesh Chauhan has a lot in common with his photographs: warm, direct and full of character. He’s inspired by the golden afternoon sun at events like Pitti Uomo in Florence and the Concours d’Elégance in Geneva, and the way it elevates everything it touches. His photos recreate that glow.

The same thinking guides his eye for style. “I gravitate towards warmer colours in the outfits themselves…brown tones, golden tones. The key thing is balance. I want a little thing that will catch the eye, a pink pastel or brown gold tie on beige.” Even in the winter, he says, a chocolate brown sweater will add texture and warmth.

These values are revealed in these shots of Steven Atkins and Alex Spinoccia of tailor Cad and the Dandy, taken by chance one day on Savile Row. “They’re the nicest and best dressed guys, with such individual styles,” Chauhan says. “Steven is a lot more of a tailor in the traditional sense. Alex is rock and roll.” What people wear should reflect them, he explains, pointing to Atkins’s collar bar as a telling detail. “As long as you’re comfortable and confident, you’ll always look good.”

Street style luminary Mordechai Rubinstein loves colour. “If I see a neon green or orange vest, or a trench coat with a nova check Burberry lining,” he says, “it catches my eye and I run after it.” He takes photos constantly, always picking out surprising juxtapositions: dress trousers with high tops, hiking boots in the city.

His subjects have intensity and confidence because their choices are personal. In this image, he found a man on a Maine beach in duck boots, denim and a firetruck red raincoat, wearing a stopwatch around his neck. This inspired choice of neckwear turned out to be a health precaution after a triple bypass.

Rubinstein isn’t searching for novelty but a kind of ordinary beauty. His best subjects are the ones who’ve grown into their clothes and wear them like a uniform. “Not just police and firefighters and the FedEx guy,” he explains, but “the rabbi, the doctor and the lawyer. They don’t think about what to wear, they just put it on…Today a lot of people are in costume and I try to find the originals.” The best inspiration, he says, comes from the guy who doesn’t even know how cool he looks.

Leon Rehman has an eye for movement. “How someone walks, how their trousers drape when they move,” he explains. “I’m looking for details that tell a story.” For him, movement means how you carry yourself, and how clothes sit on the body or flow over it.

These nuances are important, he says, because style can be close to invisible. It’s not shouting for attention but taking care of your appearance without standing out. “More than anything, I’m looking for harmony, in a scene or in a person’s dress. That involves line, texture, comfort, colour.”

Rehman illustrates this point with his portrait of Savile Row legend Edward Sexton (above). The shot was taken mid-conversation, just as Sexton folded his arms. “I’m drawn in by the movement of grey flannel creasing around his elbows,” he says, explaining how the light shadows across the suit, highlighting the rich texture of the flannel and catching Sexton’s silver hair. All this adds up to a subtle portrait of a perennially stylish figure. Wearing strong, simple designs and quality materials lets your actions speak loudest.

Jamie Ferguson has worked with some of the most celebrated niche brands in menswear, but his tastes are omnivorous.  “What I’m personally interested in,” he tells us, “ranges from tailoring to workwear, to streetwear and military. I love seeing someone who takes risks and mixes up different elements. Put simply though, I like seeing smarter outfits dressed down and casual outfits dressed up.”

It might be the combinations of patterns that catches his eye, or the drape and fit of the clothes, but what he loves most are guys who dare to experiment. His portrait of Ryosuke Serizawa of Japanese brand Beams shows just how good it can be to colour outside the lines. “The smarter elements of the tweed jacket and tie are softened by the Fair Isle knit,” Ferguson says, and the Barbour jacket adds visual interest. What provides the twist is the choice of cargo pants worn beneath. An earthy palette brings it all together. “Fantastic use of colour, texture and fit.”

Alex Natt sees clothing like architecture. He trained in fine art photography and has long been interested in landscapes and urban environments. Strong lines and shapes draw his eye, from the bold, harsh simplicity of brutalism to the striking silhouettes of Rick Owens and Thom Browne. Powerful designs like these can seem stark, but there’s comfort and harmony in them, he explains, citing the mid-century thinker’s uniform of black turtlenecks and heavy frames as an example.

In his chosen image, shot for heritage shoemaker Crown Northampton, model André Larnyoh is flanked by electrical towers. “It’s a Northampton company and I wanted to relate the locality,” he says. Larnyoh wears a checked mackintosh coat and thick moleskin trousers in English country style. The colours blend with the environment and his lean figure echoes the pylons behind him.

This exemplifies Natt’s approach to style: finding people and their environment in harmony. And when it comes to dressing harmoniously, simple, practical designs translate to elegance and comfort. “Dress honestly to who you are and what your needs are. Through that you’ll find who you are.”