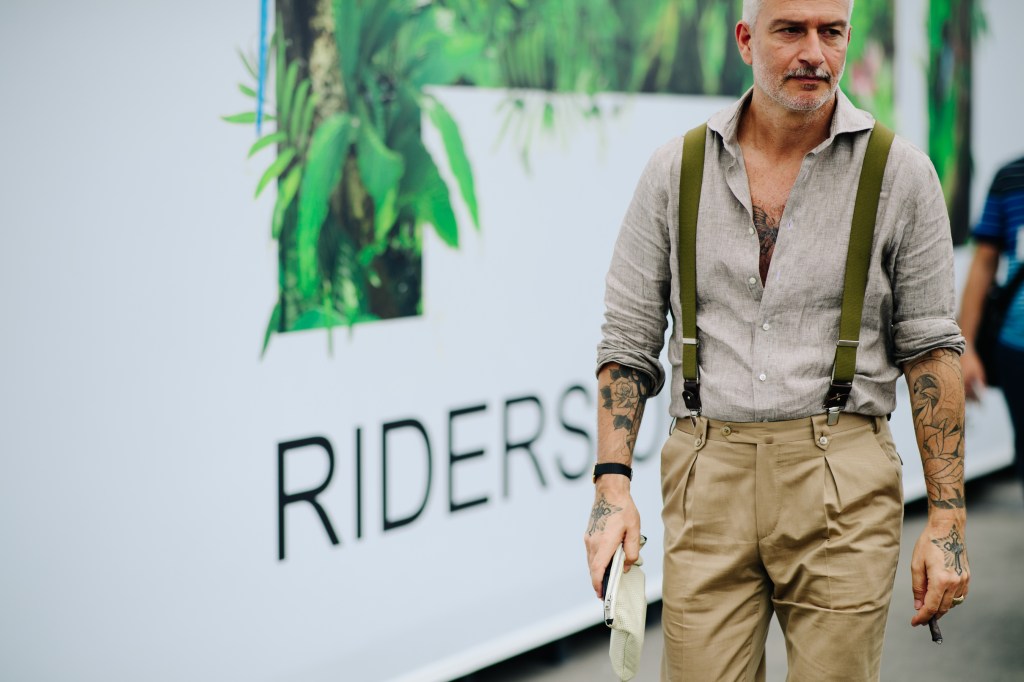 Walking into the central piazza of Pitti Uomo, the world’s most important menswear trade show in Florence, is like entering a vast aviary filled with myriad birds of exotic plumage. Peacocks, to be precise. Flashily dressed men flock to the square outside the biannual event to have their photograph taken – their lapels wider, their pocket squares larger, and the colours and patterns of their suits more vivid and lairy than tasteful design would dictate. They preen their plumage, they strut in large groups and they court the attention of street style photographers with a zeal akin to the most ardent of avian mating rituals. When I attended the most recent Pitti Uomo, in June 2017, I was overwhelmed by the narcissism that eclipsed anything I’d ever seen outside a women’s fashion show. Pitti Uomo (its name derived from the city’s Palazzo Pitti) is so impressive a spectacle that there’s even been a mockumentary made about it, The Life of Pitti Peacocks by filmmaker Aaron Christian. The short film is narrated by a scarily accurate David Attenborough impersonator who, quite correctly, describes the Pitti peacock as “nature’s most extravagant narcissist”.

As the narrator continues, the Pitti peacock is “one of the most eye-catching creatures in all of creation. The peacock is something of a social butterfly, often grouping together in order to multiply the visual impact of its splendiferousness. It is not enough, then, to merely shine bright. He must also eclipse his neighbour.”But to outside observers the preening of the Pitti Peacocks has also somewhat eclipsed the true purpose of Pitti Uomo, which, much more than a stomping ground for stupendously dressed men, is a place for serious menswear business to be done in a setting that is part trade fair, part runway show, part retail trend forecasting tool … and entirely unique. As the world’s most important forum for design innovation and craftsmanship in menswear, Pitti Uomo attracted 19,400 fashion buyers and more than 30,000 visitors (including me) to the June 2017 event at the Fortezza da Basso, a Renaissance-era military fort in the historical heartland of sartorial splendour. The financial significance of Pitti Uomo was underlined at the official opening when Florence mayor Dario Nardella and a series of political dignitaries spoke about the importance of the twice-yearly fair that delivers a significant economic boost to the city. 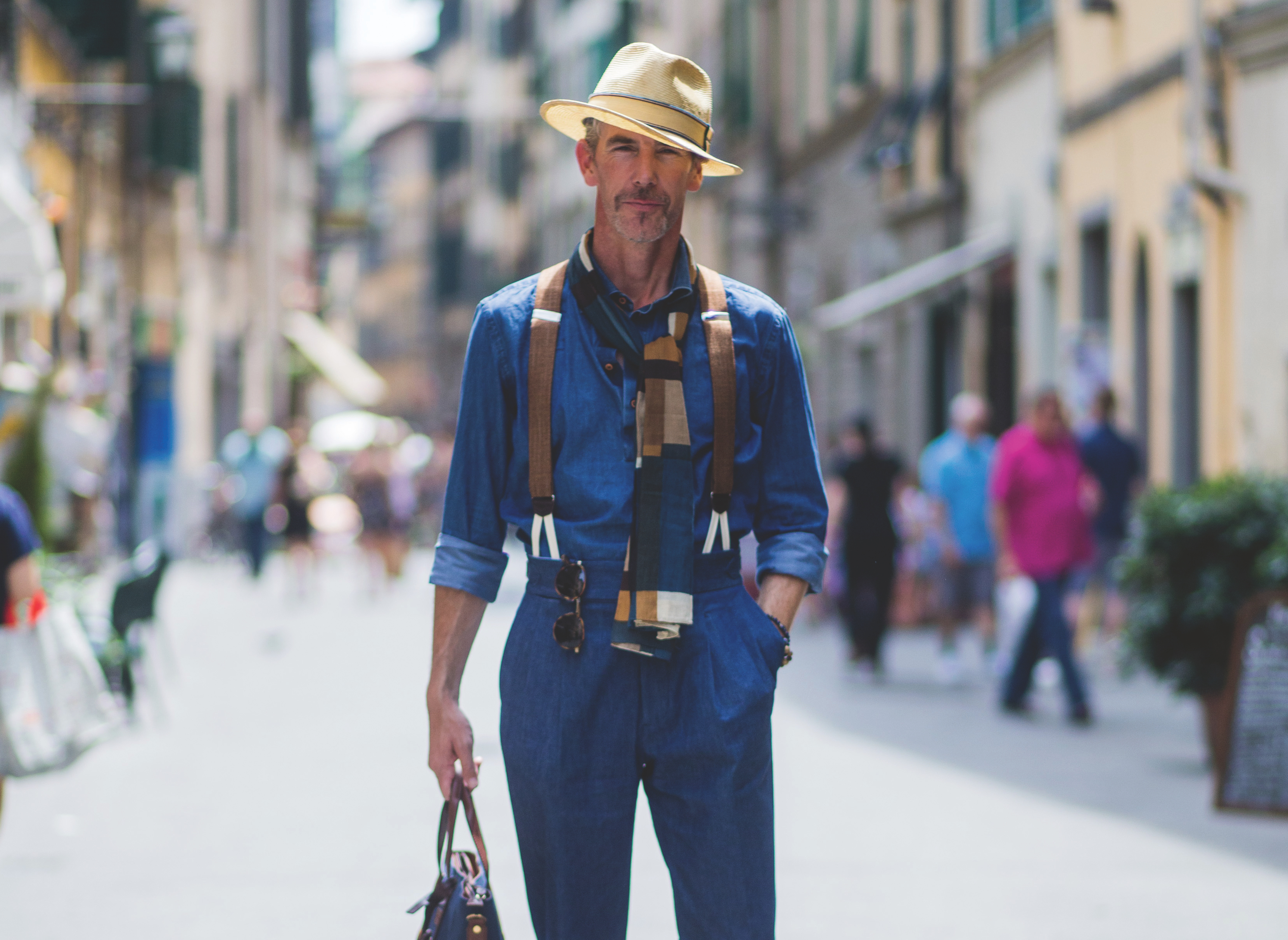 “We attract the major buyers from around the world and they buy deep,” says Pitti Immagine Uomo CEO Raffaello Napoleone.

“In many countries it’s quite impossible to meet these top buyers in person, so this is a unique opportunity for brands to generate sales and awareness.”Founded in 1983 to promote design innovation and craftsmanship, Pitti Uomo initially traded off Italy’s reputation as the global heartland of menswear.“ From a fabric point of view and from a manufacturing point of view, Italy is no doubt the leading country when it comes to menswear,” says Napoleone. “We have the best menswear producers from an industrial point of view, but also from a craftsmanship point of view, which is why Made in Italy is synonymous with quality.”While the Pitti Immagine Uomo organisation’s origins date back to the early ’50s, when the first fashion shows were staged in the Sala Bianca in Palazzo Pitti in Florence, it was not until 1972 that the first edition under the banner of Pitti Uomo was held to promote the best of the Italian fashion industry to foreign markets. By the ’80s, the organisers realised they needed to open the event up to international designers and expand its scope from a basic trade fair to encompass runway shows, research, fragrance, food and wine, in order to remain relevant for global buyers and media.

“The menswear trade show was really suffering due to a lack of strategy,” says Napoleone.

“We decided to accept the challenge and we completely changed the style of the event from just being about a trade show to including exhibitions, fashion shows, services and special projects that would be innovative and exciting.” 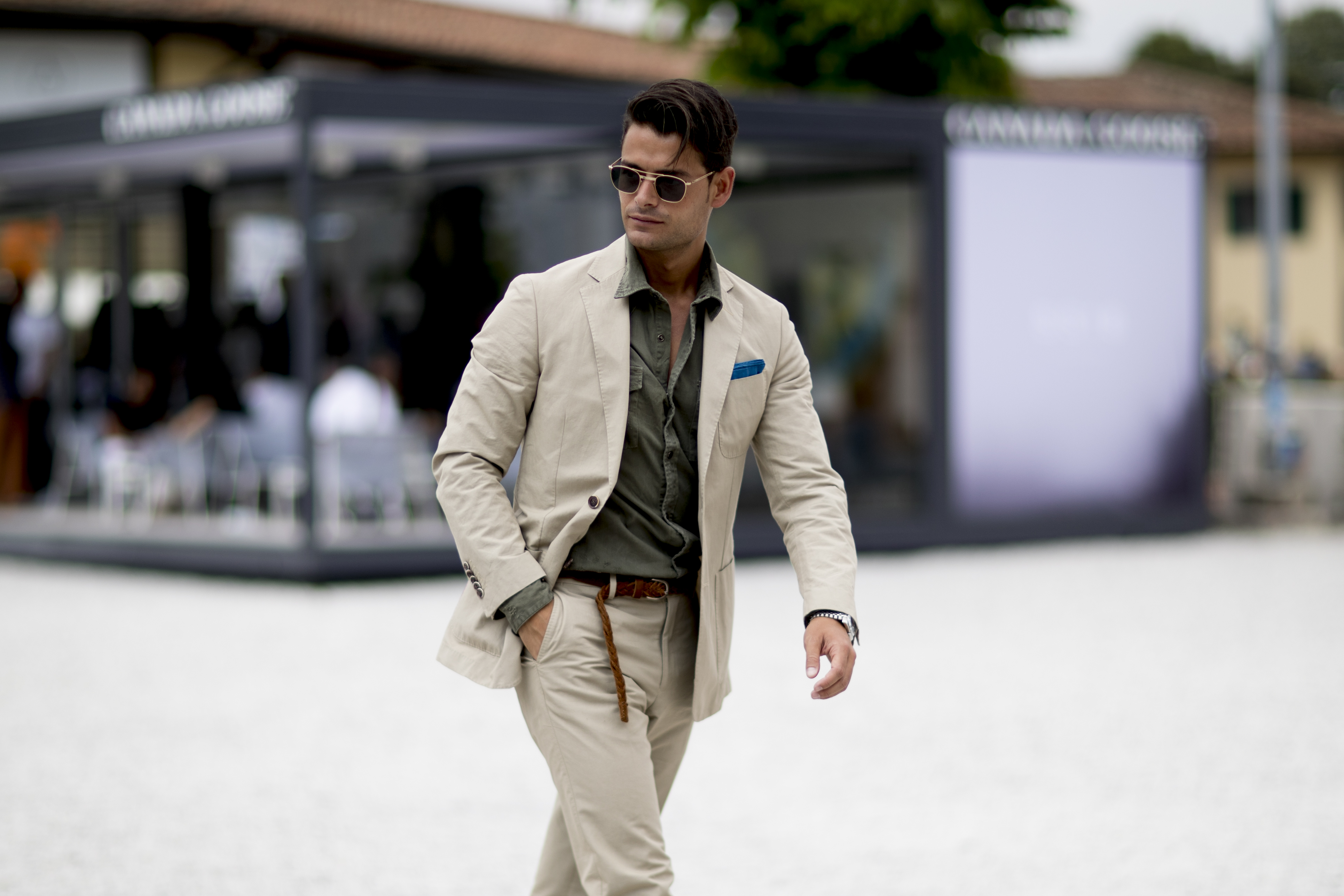 “We were thinking of doing something around sport, and it made sense to do it in Florence at Pitti because it’s such a powerful platform,” says Louboutin. The Frenchman was not alone as a designer praising the ability of the Florence event to generate significant sales and press coverage.“ Pitti Uomo is absolutely the best men’s fashion week in the world,” says Brunello Cucinelli, founder and CEO of the eponymous brand. “Pitti is an open parade of 30,000 people and an event with its own identity.” Tateossian managing director Robert Tateossian, whose accessories and jewellery brand is stocked by the likes of Harrods, Harvey Nichols and Saks Fifth Avenue, says: “We have showrooms in both Milan and London, but Pitti Uomo represents the most important showcase on a global level for presenting our collections of men’s accessories.”Buyers also relish Pitti as a one-stop shop to find new talents and spot emerging trends.“Pitti Uomo is a global fair where not just the best Italian brands are presented, but where the attention and research are directed towards the whole world,” says matchesfashion.com head of menswear, Damien Paul.Alix Rutsey, menswear buyer for Ssense in Montreal, says Pitti is “a perfect mix of big names in menswear and new experimental collections”, while Simon Hogeman, owner of Très Bien in Malmo, rates the fair as “an important opportunity to get a 360-degree view of what is happening in the men’s fashion world”.

A particularly relevant and exciting event during Pitti Uomo was the Guest Nation Australia, in which Ten Pieces, Commas, Strateas.Carlucci and Ex Infinitas were among the Australian labels displayed in a dedicated pavilion. It was launched by the Australian ambassador to Italy Greg French, who said it was “wonderful to see Australia bringing some great ideas to the world”. Chris Ran Lin, Double Rainbouu and Sener Besim were also part of the largest official Australian delegation ever to attend the fair, following an invitation from its organising body.“Australia is becoming one of the most interesting – and quickly growing – places in fashion and creativity today: that’s why we decided to dedicate a Guest Nation project to this country,” says Fondazione Pitti Immagine Discovery president Andrea Cavicchi. For Commas designer and owner Richard Jarman, “being selected to represent Australia at Pitti Uomo in June was a life-changing opportunity.

Through Guest Nation Australia, I was introduced to the most influential people in the global menswear industry … These relationships have propelled Commas on to the global stage, with sales through key online stores and press in the most important fashion publications in the world.”As any Pitti Peacock will tell you, it’s all about strutting your stuff.

The Origin of Fleeces (by Means of Careful Selection)

Just Deux It? Nike Spends £535 Million on a New European Headquarters in Paris