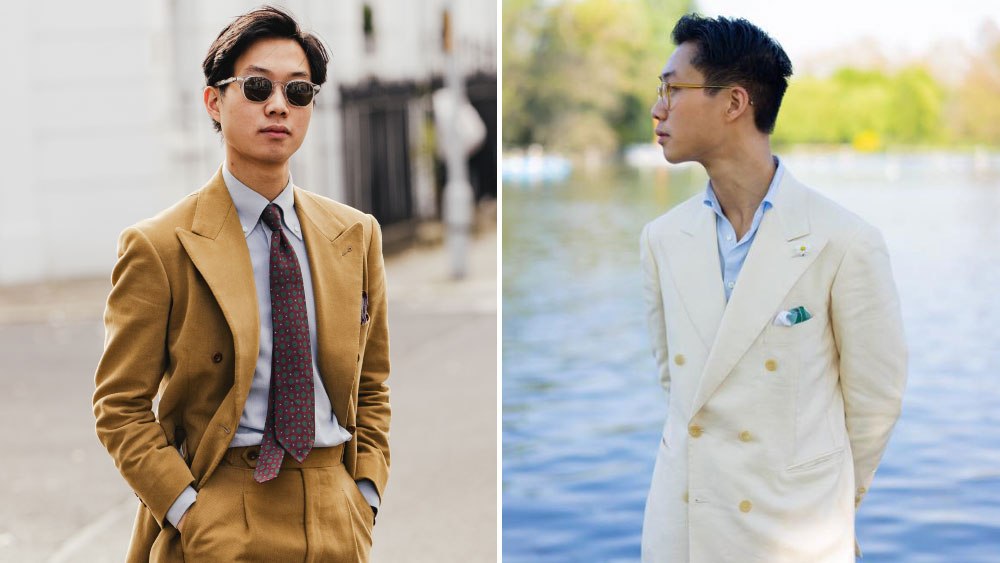 Despite the uncertainty of the past few months, Hong Kong tailoring is enjoying a renaissance. Several new brands have been gaining ground in recent years, challenging European craftspeople in both quality and price. Craftsman Clothing is now an established independent brand, known for its made-to-measure suede and safari jackets and Gurkha trousers. Prologue is a three-year-old tailor that takes advantage of the ‘cheap’ tailoring scene in Hong Kong to position itself as the gateway to made-to-measure tailoring for the younger guy.

One of the newest luxury brands to emerge from Hong Kong is The Anthology, although the company has been a good few years in the making. It was founded by Buzz Tang, a sartorialist with marketing experience who spent time working with London cloth merchants, and bespoke tailor Andy Chong, who runs a successful workshop in China. Tang approached Chong around two years ago and suggested that his workshop might perform even better with a consumer-facing brand behind it. Flash forward to today and The Anthology has shops in Hong Kong and Taipei, has previously hosted a number of trunk shows in London, and plans to visit other cities when it can, including New York.

Tang and Chong are both young, 22 and 31-years-old respectively, and bring an infectious sense of enthusiasm to what might otherwise be a very traditional brand. Both are passionate about “classic menswear,” but are keen to establish a tailoring house that makes old school suiting relevant and contemporary. The Anthology has also been lucky enough to work through today’s Covid-19 uncertainty pretty speedily now that things are stabilising in mainland China, which has boosted the pair’s sense of optimism. “While our atelier needed to close for a number of weeks, we’re now back to normal,” explains Tang. “Thankfully, production has resumed, our stores are open at present and we’re working through garments for clients as efficiently as we can.”

So, what can you expect if you order a suit from The Anthology? “Our house style features extended wide shoulders, a low gorge and a specific balance of collar and lapel proportions that we’ve been tweaking for almost a year,” says Tang. “When you consider the decline in formality in modern work culture, and climate change too, we think there’s a need to adapt to something that is softer, lighter and comfortable to wear.”

The duo draws inspiration from traditional Florentine tailoring for this, and certainly, the straight, almost convex line of their lapels, has more than a whiff of northern Italian tailoring about them. The brand’s double-breasted model, in particular, is very striking—something that works just as well in a punchy gray Prince of Wales check flannel as it does in cream linen.

The other thing that sets The Anthology apart is an idiosyncratic fitting process. “We make finished fitting prototypes for clients in trial cloth instead of offering a basted fitting”, explains Tang. “We believe that the first cut has to be as precise as possible, because it’s tricky to rectify a pattern after a fitting. To avoid this, we use trial fabric at the first fitting and this allows us to be as accurate as possible with the fundamentals before working with the client’s chosen cloth.”

Of course, there is an elephant in the room. Hong Kong doesn’t have the tailoring heritage that hardcore menswear enthusiasts often seek out. Does that bother Tang and Chong? “Well, the Greeks invented the sundial, but wouldn’t you choose to expand your watch collection with pieces made in Switzerland?” Tang wryly asks. “Quality isn’t restricted by country of production. Our products are proudly made in Asia and their quality speaks for itself.”

It’s a good point. While traditional “made in England” or “made in Italy” messaging dominates the luxury clothing market, it doesn’t always live up to its promise. By contrast, Chinese workshops are making some impressive clothes right now. Both Edward Sexton’s Offshore Bespoke service and Huntsman’s Bespoke 100 service rely on specialist tailoring workshops in Shanghai, but Chinese-made suits from these old British names are significantly more expensive than The Anthology’s starting price of around £1800 for a two-piece suit.

It might be the new kid on the block, but The Anthology is making a name for itself, and demonstrates the value of going where the best makers are, rather than sticking to London or Naples out of a rigid sense of tradition. It’ll be interesting to see how the brand develops over the next couple of years, but Tang and Chong have come out of the gates flying. If you’re in the market for a softly structured custom suit with top quality finishing, you could do a lot worse than The Anthology.