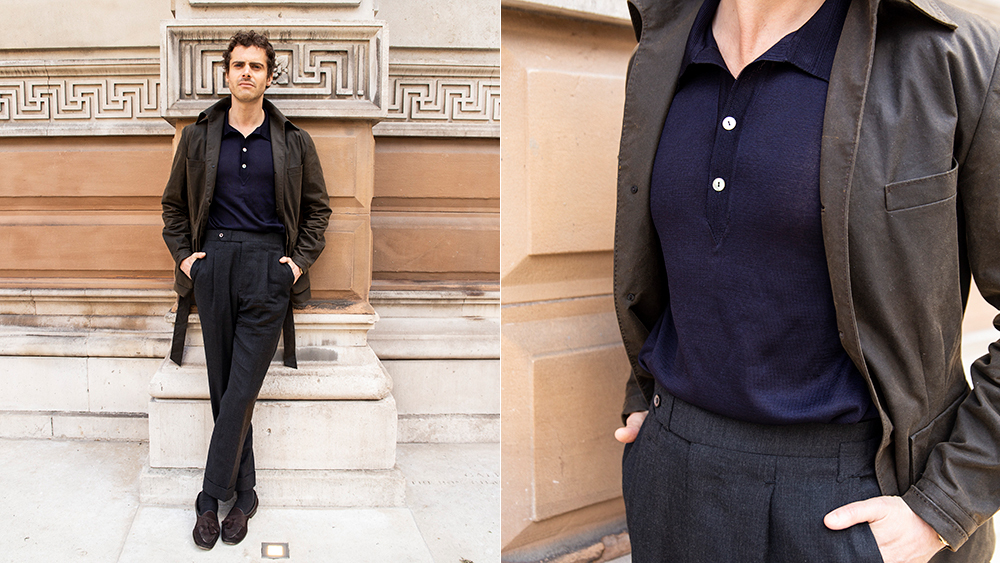 The new menswear label Yuri & Yuri has been in business for less than a year, but the ideas and attitude that underpin it have been around for over seven decades.

The brand takes its unusual moniker from its designer Yuri Choi, who studied tailoring in South Korea before moving to London to train at the Savile Row Academy. After graduating she launched her business with Will Field, a cloth merchant who she met buying fabric on the Row: Field now oversees much of the fabrication for the brand. Between them, they wanted to produce a range that takes the best features of high-end tailoring and translates them into a luxury ready-to-wear label.

Yuri Choi and Will Field, co-founders of Yuri & Yuri. Field is wearing one of the brand’s knit polo shirts. Rikesh Chauhan

What’s refreshing about Yuri & Yuri is that the collection has a definite point of view. Which is that there was something about the ’50s and ’60s, and specifically gentlemen’s leisure-ware of that period, that married elegance and elan with ease and comfort. Think “the golfer Arnold Palmer, or the movie The Talented Mr. Ripley,” says Field. “We wanted to create something of value which will not only last but always be relevant, and able to withstand trends. Something to wear as easily to the beach, or on the golf course, but also to dinner or a more formal occasion.”

So that means high-waisted, pleated trousers in linens or wool, and knitted polo shirts and short-sleeved button-ups with strong collars intended to be worn either under or over a jacket collar. In such a tight collection, the quality of the materials is all-important. British mills have been used for the wool, and a Russian mill was chosen for the summer-weight linen, “…because it was the only linen that seemed to hold its shape better and crease much less than others we’d used before”.

One of the label’s unique selling points is its use of a fabric called serie (pronounced se-re-ya), a man-made material originally produced in Japan by Mitsubishi. When that side of Mitsubishi’s business was closed down, Yuri’s family, in the tailoring trade back in South Korea, bought all the remaining yarn. “The main benefits of it are its silky appearance and its ability to feel cool in hot weather,” Field says. “It doesn’t stick to the skin and it’s incredibly hard-wearing.”

A fan of Yuri & Yuri’s aesthetic, I tried a couple of pieces. I can report that the linen trousers are nicely put together, lighter weight than most ‘smart’ linen strides (which tend to be 380g fabrics; these are 232g) and so very wearable. I also tried what the brand calls a Raillson shirt in a brown serie which looks undeniably stylish, with the oversized collar framing your neck just so. The fit is small, so I’d recommend sizing up. It’s a very open weave, which makes it extremely cool (in both senses) and so perfect for muggy summer nights. One note: because the weave of the fabric is open, mine caught and pulled on my watch strap and, on another occasion, my wife’s jewelry. I might try the polo shirts next, in navy or burgundy, because the styling is unlike any other currently on the market, and the weave is denser and so less likely to catch.

As we come into Autumn and winter, the hero piece of outerwear that Yuri & Yuri currently produces is also appealing: The Cadogan is a cross between a field jacket and a safari jacket. It buttons up, but features a belt that ties in front, give it a rather debonair feel. The one-piece collar is particularly well-executed so that it stands up perfectly at the back and rolls nicely at the front. Previously available in a lovely waxed brown English cotton, for Autumn it will also come in merino wool with leather detailing, which will work well in the transitional period before winter bites.

The label also offers bespoke knitwear online, which is an intriguing prospect. But, still a long way short of its first birthday, Yuri & Yuri has already hit on a style and swagger that other labels take years to find. We await the new season collection with interest.

Eight Menswear Staples Worth Investing in Now, According to the Experts at Matches Fashion