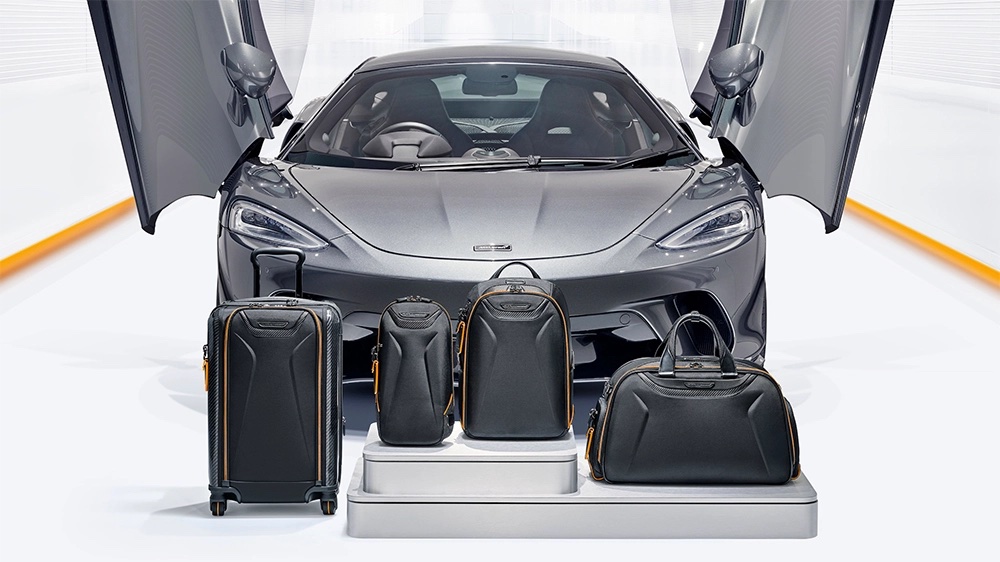 That’s the thinking behind a new collaboration between the British marque and high-end luggage maker Tumi. The two esteemed brands have just unveiled a new capsule collection of bags stylish enough to take on any ride in your F1.

Aimed at “global citizens,” the new collection consists of nine pieces, including duffel bags, a backpack with a built-in USB port and a travel kit. Tumi hasn’t just slapped the McLaren logo on some of its pre-existing pieces, either. Each item is specifically designed to incorporate elements from the automaker’s road and race cars, like its CCX6 carbon-fibre accents and its signature Papaya orange colour. The Aero International Expandable 4 Wheel Carry-O, for example, is covered in a hard-wearing thermoplastic composite shell and opens up to reveal an interior compression strap modelled on the six-point racing harness found in the marque’s track-only vehicles. Other supercar-inspired items include a utility pouch, small packing cube and an expandable organiser.

“At McLaren we focus on articulating a clear design language and materials selection which combines and leads into our car’s performance,” the marque’s design director, Rob Melville, said in a statement. “We wanted to capture those aspects with Tumi, so we’ve spent a great deal of time working to analyse and refine every aspect of this collection.”

This isn’t the first time we’ve seen McLaren team up with another luxury goods maker. Last year, they collaborated on a sporty pair of true wireless headphones with Klipsch. Two years before that that marque collaborated with British outerwear brand Belstaff on a 10-piece menswear collection. It’s also not McLaren’s first foray into the luggage sector. In 2019, the automaker’s in-house Special Operations Department released a luggage collection inspired by the GT.