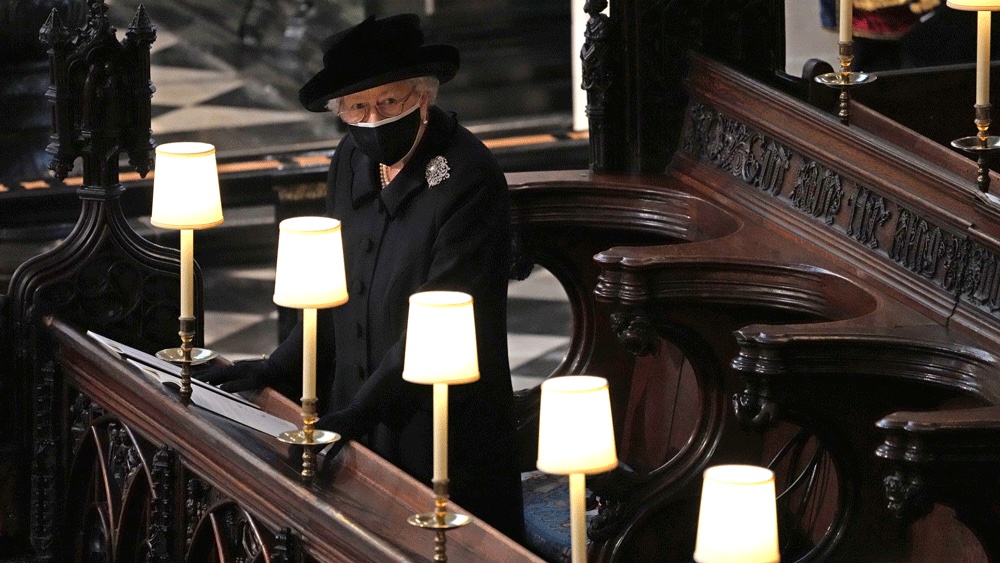 Few images are more poignant than the photo of Queen Elizabeth II sitting alone in a pew at St. George’s Chapel on Saturday during the funeral of Prince Philip, her husband of 73 years. The Duke of Edinburgh’s death on April 9 at the age of 99 years meant an adjustment to his funeral arrangements, which Philip had begun planning himself more than 18 years ago, due to the restrictions of the COVID-19 pandemic. While her solo positioning in the chapel was largely due to social-distancing guidelines, the sight of the diminutive queen, who on Wednesday celebrates her 95th birthday, sitting alone still caused many to reflect on the immensity of her loss.

Against her black dress coat, viewers also couldn’t help but notice the oversized brooch just below the queen’s left shoulder, with royal watchers quickly weighing in on social media to highlight its significance. Among her considerable jewellery collection, the queen chose to wear the Richmond Brooch, which was one of many pieces she inherited after her grandmother, Queen Mary, passed away in 1953.

Princess Mary of Teck was 26 years old when she married Prince George in July 1893, and among her wedding gifts was this large brooch, crafted of pearls and diamonds set in silver and gold. Crafted by the Bond Street firm Hunt & Roskell, which held a Royal Warrant from Queen Victoria, the brooch was a gift from the people of Richmond. Mary’s family lived for many years at White Lodge in Richmond Park, which has been used to house the Royal Ballet School since 1956.

The brooch was reportedly a favourite of Mary’s, who loved not only its size but also its versatility as a convertible piece—the diamond-embellished pearl pendant can be detached. Starting with her honeymoon, which was partly spent in Queen Victoria’s company at Osborne House on the Isle of Wight, Mary often wore the brooch with and without its pendant, placing the pendant alone in her hair or on the Lover’s Knot Tiara she commissioned in 1913. She also often chose to wear the brooch itself as part of other jewels; at the splashy Devonshire House Ball of 1897, portraits of Mary show the brooch adorning a five-row pearl necklace.

“The choice of pearls and diamonds is always fitting for the royal family, and it remains a mainstay for many of the royals’ most important public and private events in their lives,” notes Claibourne Poindexter, jewels specialist at Christie’s auction house. “This brooch has been in the family for a very long time and is, of course, unique in its design and craftsmanship. I also think that [Queen Elizabeth] is very similar to her grandmother, in that she loves jewellery and believes it is a serious and necessary part of the job.

Indeed, fast-forward more than a century, and Elizabeth has chosen the Richmond Brooch for a variety of key occasions, from meeting with Pope John Paul II in October 2000 to a 2014 ceremony for the annual Festival of Remembrance, which honours the military and all victims of war and conflict. For both events, the queen chose to include the pendant on the brooch.

More recently, she included the Richmond Brooch, without pendant, on the lime-hued coat she wore to the May 2018 wedding of Prince Harry and Meghan Markle, and three years later eschewed the pendant when wearing the brooch at her husband’s funeral. But Poindexter believes nothing should be assumed about that choice or the piece’s connection to previous events. “I honestly think that not wearing the pendant makes it a bit more wearable and appropriate for daytime as a brooch to wear during a somber occasion,” he says.

Ultimately, any sentiment that might be ascribed to the brooch is easy to understand. It came to her from her grandmother, with whom Elizabeth enjoyed a close relationship, while the piece originally was crafted to celebrate the wedding of her grandparents, who were married for 42 years. “[It] may have been worn to represent not only her grandparents’ long marriage but the queen’s own long and happy marriage,” Poindexter says. “Queen Elizabeth has continued to expand the royal jewellery collection, much like her grandmother did, and this brooch is a wonderful example of that continued tradition of wearing favourite family heirlooms.”