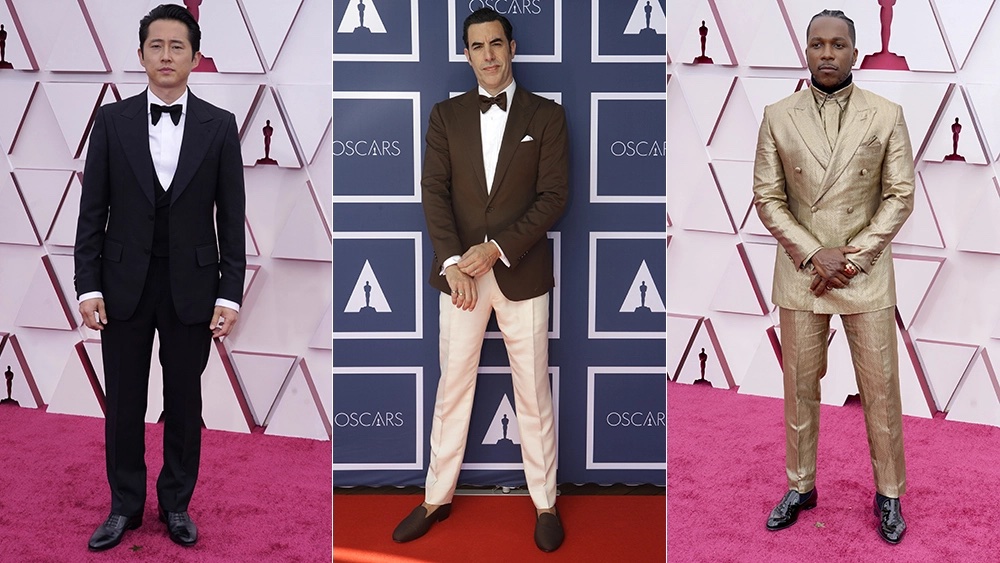 After a year of movie premieres and award shows relegated to Zoom, the red carpet was back in full force for the 93rd annual Academy Awards. While Hollywood’s previous socially distanced functions have had an anything-goes dress code—the Golden Globes saw everything from sweats and flannels to couture tuxedos—the Oscars’ organisers sent invitees some clear parameters for the evening’s dress code: “Formal is totally cool if you want to go there, but casual is really not.” In short, good old-fashioned glamour has returned. Here are the guys who turned out the best looks of the night.

Oscar wasn’t the only man in gold on Sunday night. Best Supporting Actor nominee Leslie Odom Jr. opted for opulence with a gilt double-breasted tuxedo by Brioni and a knuckle-duster of a Cartier Panthere ring. The tux certainly isn’t one for the faint of heart but we admire Odom Jr.’s commitment to high glam—the suit’s silk fabric is electroplated with pure 24-karat gold, using technology that’s only been employed by one house before Brioni: the Vatican.

Minari star Steven Yeun took the evening’s Old Hollywood associations and played with their proportions ever-so-slightly. The nominee for Best Actor in a Leading Role chose a perfectly fitting single-breasted tuxedo with wide peak lapels from Gucci for the occasion, paired with a crisp white shirt, double-breasted vest and a teardrop bowtie. Subtly freshening up an old formula is the best way to color inside the lines and still look elegant.

Daniel Kaluuya, nominated for Best Supporting Actor for his role in Judas and the Black Messiah, struck a nice balance between formality and ease in a minimalist black double-breasted suit by Bottega Veneta worn atop a black crew neck. While we’re all for monochromatic looks, head-to-toe black can be a bit flat. This look would’ve been even better with a charcoal layer beneath, but Kaluuya’s Cartier diamond necklace and skeletonised Santos watch add some pizzazz.

Stanfield may not have gone for a traditional tux, but we appreciate this fashion-y riff on the classic form. Jumpsuits would scare most of us off but the Judas and the Black Messiah star goes bold in custom Saint Laurent (derived from a design originally created for the brand’s womenswear collection). The wider legs with a generous break, dramatic camp collar and yellow-lensed shades give the whole look groovy, 1970s swagger.

One of the best-dressed men at the Oscars was actually a boy: Alan Kim, one of the stars of Minari, celebrated his 9th birthday just before this year’s ceremony. He wore a custom Thom Browne look on the red carpet, playing with the charm of British school uniforms by wearing shorts with a jacket whose lapels were piped with grosgrain ribbon. Charming.

Beaming in from Sydney, Australia, Cohen sported one of the night’s smartest getups: a chocolate brown peaked lapel dinner jacket and matching bow tie with cream-coloured trousers and smoking slippers, all from Ralph Lauren Purple Label. Brown isn’t a hue often seen on the red carpet, or evening wear in general, but Cohen makes a case for it being every bit as elegant as traditional black or navy.

What better way to greet the people you haven’t seen in a while than something they’ll never forget? Colman Domingo, one of the stars of Ma Rainey’s Black Bottom, donned a high-wattage and sequined custom look from Versace in an incandescent shade of pink. It fits well and is masterfully made—but its colour and texture are representative of the optimism so many people feel now that the world is starting to open up again.