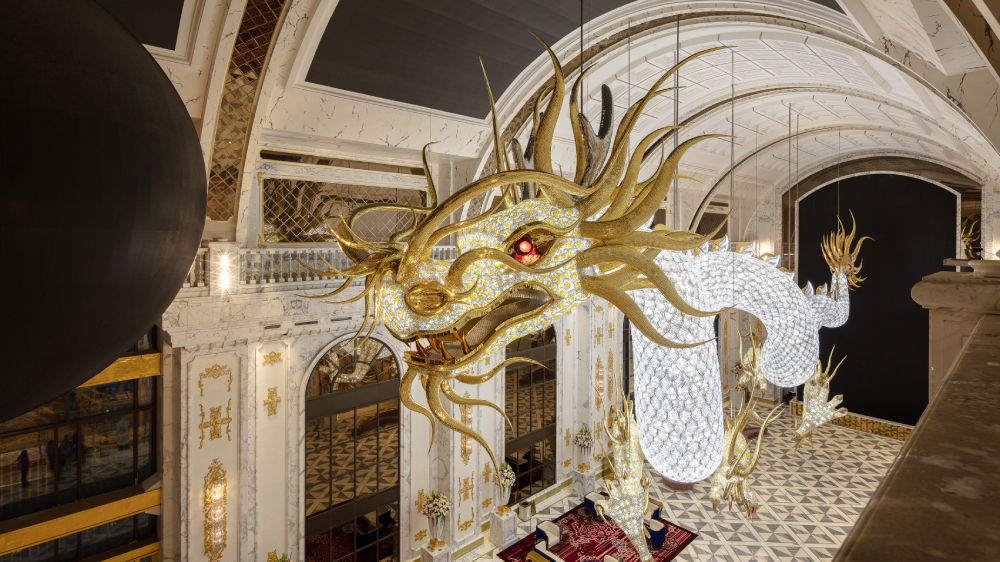 Crystal is usually associated with things you can hold in your hand or wear on your body—from brooches and lapel pins to small figurines—but rarely with mythical monsters. And by flipping this narrative on its head, a new project might also have created the world’s largest pieces of jewellery.

That’s what Lasvit, a Czech design firm that specialises in making innovative lighting elements, believes it has achieved with the two massive, dragon-shaped chandeliers it recently made for the Imperial Palace casino in Saipan. The work—which uses 2.5 million Swarovski crystals set, gem-style, into 13,000 scales—spans 60 meters and weighs a staggering 40 tons. Lasvit will present the work to Guinness World Records in its bid to have it certified as the world’s largest jewellery.

Even if it doesn’t achieve this goal, it’s still a monumental achievement. The work draws on ancient Chinese symbolism to depict the two levitating beasts fighting over a flaming pearl. And even though the inspiration is ages old, the technology that brought it to life is decidedly modern.

“In this project, we approached the limits of what is both technically and physically possible,” said Leon Jakimič, Lasvit’s founder and president, in a press release. “Master glassmakers and metalsmiths brought the know-how of hundreds of years of craft tradition while their work was backed by a high-tech design process throughout.” All told, it took over three years for Lasvit’s teams to take the original concept from sketch to completion.

Even though creating the dragons themselves was incredibly difficult, installing them was nearly as strenuous. Saipan is located in an active seismic zone meaning that the sculptures had to be well-integrated with the palace’s structure and adhere to strict building codes to ensure safety in the event of an earthquake or typhoon. But because the twinkling crystal surface is backed with RGBW LED chips, even though they remain anchored securely in place, the exteriors can function as screens of sorts which create the illusion of movement.

The dragons have five fingers on each foot which bears a special meaning, according to LASVIT. During the reign of the Qin dynasty, the five-clawed dragon was assigned to represent the Emperor while the four-clawed and three-clawed dragons were assigned to the commoners. It looks like more than just the crystals make this pair worthy of royalty.