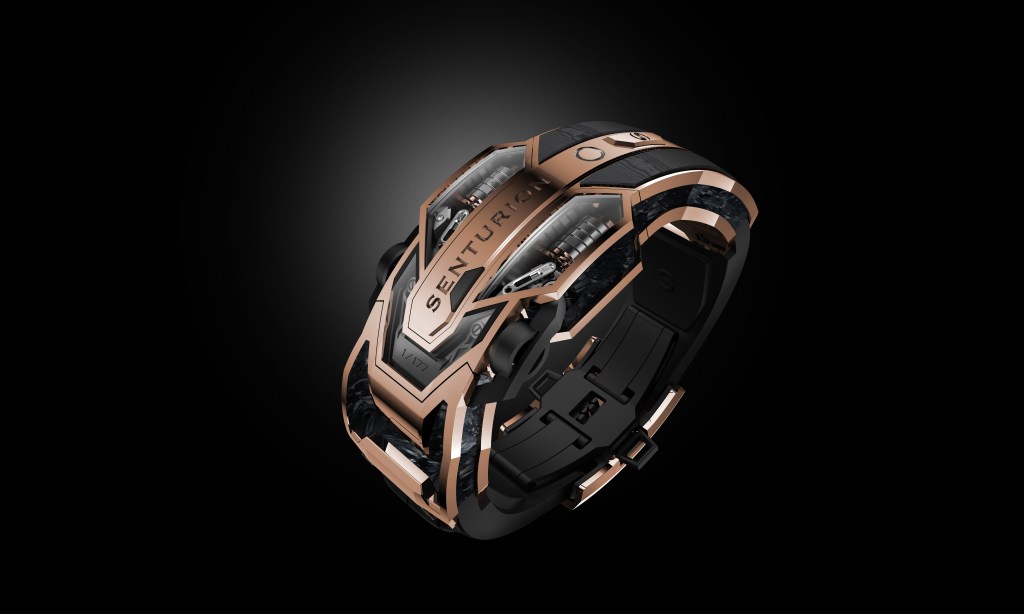 There is something distinctly Bond-esque – and it’s about time an adjective for this concept were formally established – about approaching one’s car with index finger outstretched, prodding a hefty and eye-catching piece of wristwear, before settling into the driver’s seat and driving off. It’s a man-child fantasy, granted, but deserving of fulfilment nonetheless. Which is where Senturion Key – a London-based brand that makes supercar key bracelets, embedded with RFID technology, that can be used with marques including Bentley, Ferrari, Rolls-Royce, Aston Martin and Porsche – enters the picture.

Founded in 2013, Senturion Key’s traditional modus operandihas since then been bespoke creations. Various types of gold, NTPT carbon-fibre, ceramics, diamonds and exotic leathers are all major protagonists in this particular show, while topping the bill is a material that takes rarity to all new levels: meticulously machined strips of a hunk of meteorite that hurtled into a Namibian lake around 100 million years ago. Once this knobbly chunk of celestial matter, which sits on display in the guest area of Senturion’s Mayfair showroom, has been depleted in the brand’s UK-based workshops, no more will be available until Earth is next blessed with a meteorite shower. Senturion came to broader public attention when Brazilian centre-back David Luiz commissioned 30 unique Senturion pieces to be gifted to each of his Chelsea team-mates, to celebrate the side’s winning the Premier League in Summer 2017. And the brand is set to come to even wider attention, with the release of its limited edition S177 model (from £15,580, in titanium without extra specifications; senturionkey.com).

As with previous Senturion products, customisation is – excuse the pun – key: clients might opt for a carbon composite sandwiching an elongated rose-gold central core, or swap the former material for ceramic and the latter for that elusive, aforementioned meteorite or titanium; jewel insets are also an option, with Senturion recommending that black diamonds be set against a black gold setting, white diamonds against platinum or meteorite. The gears of the clasp movement feature intricate decorative etchings, visible through sapphire glass elongated ‘windows’ in a manner reminiscent of a skeletonised watch; the clasps that open the bracelet up, meanwhile, spring outwards, a touch inspired by gull-wing doors, and are PVC-coated like F1 pistons.

Perhaps the most ingenious technical ingenuity, though, is hidden from view: a miniature circuit board, developed especially for Senturion, that is embedded with a miniaturised version of the car’s coding. A large part of the appeal of this, and any other Senturion Key, for many, is the prompt it provides for banter and camaraderie: a Senturion community is building up, according to Ayla Varquin, the company’s director of communications, which resembles a more amicable version of the business card one-upmanship restaurant scene in American Psycho: “Some individuals get excited if they have diamonds on theirs and their friend or colleague doesn’t – not surprising, as this is what happens with customised cars,” she says. Perhaps what’s most appealing about this product, though, is it actually makes the owner’s vehicle that little bit more their own, too.