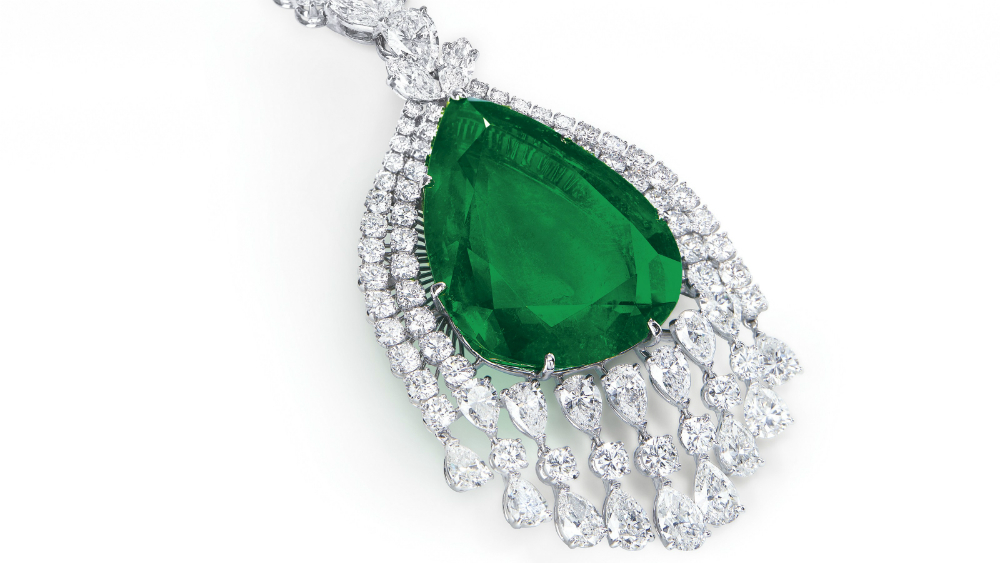 On the list of things Russian Empress Catherine the Great is known for, her gob-stopping jewellery collection isn’t at the top of the list. After all, what are a few mere baubles compared to administering the Golden Age of one of the world’s most powerful nations—and being, unquestionably, one of the most powerful women in history?

But make no mistake: The jewels she left behind are deeply impressive in their own right. Take for example a diamond-and-emerald necklace that Christie’s will auction on May 15 as part of its Magnificent Jewels sale in Geneva. The necklace features a pear-shaped emerald that belonged to the Russian Imperial collection for over a century.

The story goes that the emerald originally weighed over 107 carats and featured a rectangular cut. When Catherine died in 1796, her jewels were passed onto her children; eventually, Tsar Alexander II gave the stone to Duchess Marie of Mecklenburg-Schwerin when she married his son, Grand Duke Vladimir, in 1874.

Since then, the stone has changed hands a number of times. Cartier bought the stone from the Russian royal family in 1927, and in 1954 it cut the stone into the pear shape seen now to enhance its natural brilliance. It was suspended from a diamond necklace acquired from the Payne Whitney family and, soon after, John D. Rockefeller himself bought the whole thing.

The emerald was cut from a rectangle to its current pear shape in order to enhance its natural brilliance. Christie’s

The necklace was auctioned in Switzerland in 1971 and has been in the hands of private collectors ever since. It’s now attached to a more contemporary diamond setting, but it still carries all the history of the original stone.

Christie’s estimates that the necklace will sell for somewhere between around £1.75 million and around £2.7 million, but given this stone’s incredible provenance—not to mention its literal shining place in history—we wouldn’t be surprised to see the final bid rise well beyond the top estimate.