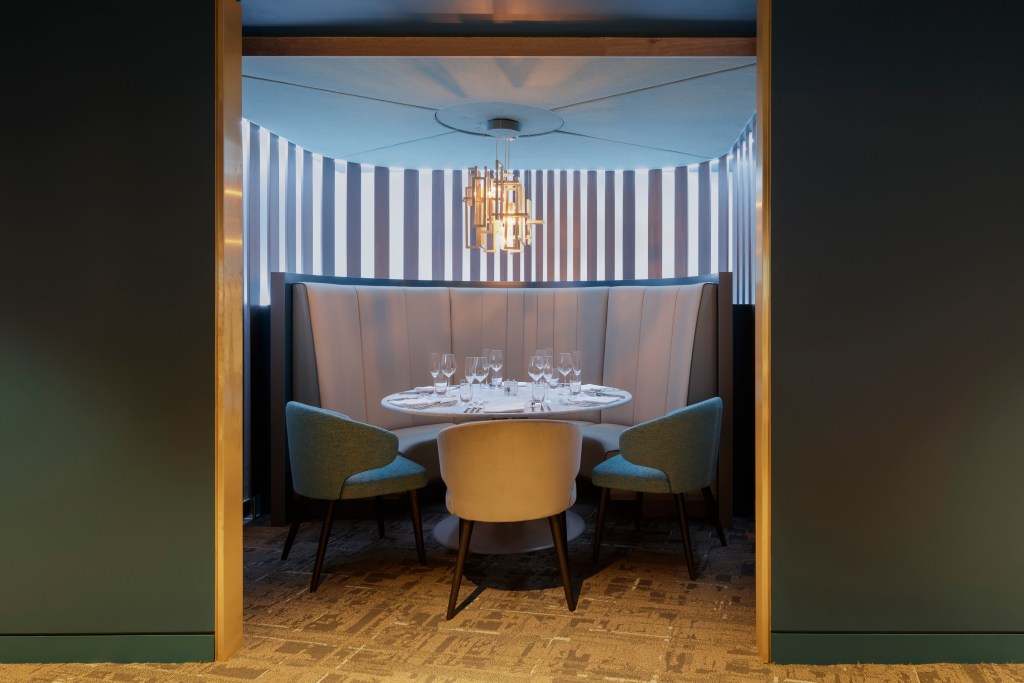 Its aspirations were lofty from the start (it was originally opened as the centrepiece of the British Empire Exhibition in 1924), so it’s fitting that Wembley Stadium has hospitality offerings befitting the illustrious setting for 78 FA Cup Finals, six European Cup finals, the Euro 1996 football championship, the 1948 Olympic Games and – most memorably of all for anyone English – the 1966 World Cup Final.

Any regular football attendees reading this will concur, match-day is all as much about ritual – about habit, and about company – as it is about sport. Familiar settings with familiar faces are all important. And the One Twenty Club (from £11,064 per season) is a place where 120 select members and their guests (just over 0.13 per cent of the 90,000 in the stadium that day, for what it’s worth) will have that experience in spades: and in luxury. 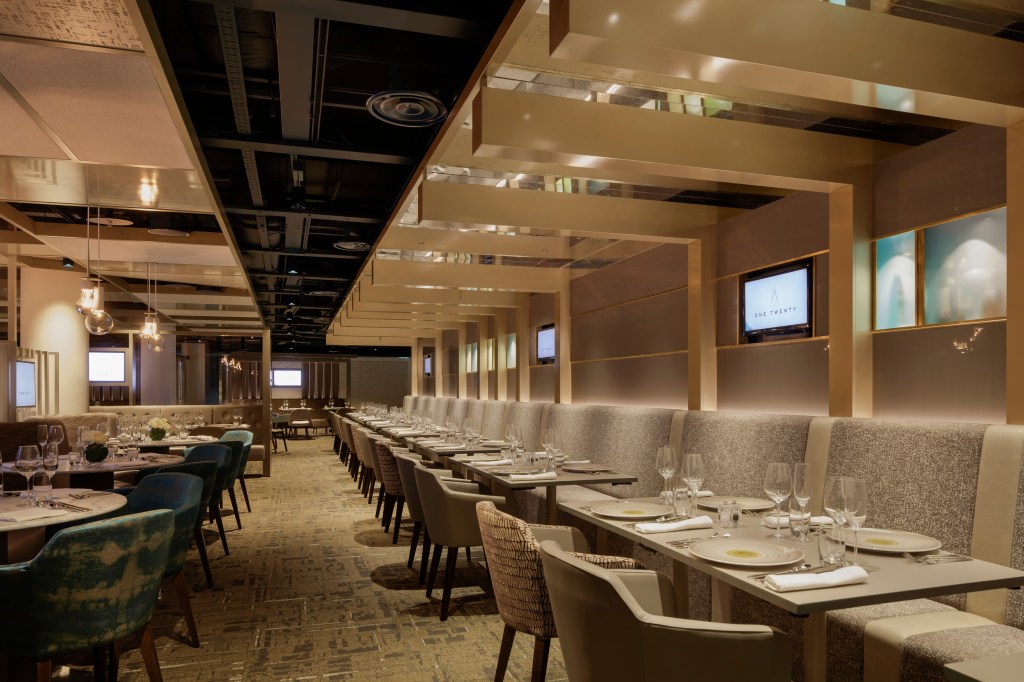 The One Twenty Restaurant  Adrian Lambert

Launched in 2017, the One Twenty Club – whose oak panel walls, 21m long bar, recessed bookshelves containing ancient Wembley archives and clusters of swivel chairs make for an environment that’s somehow cosy and yet buzzing – offers exquisite canapés and unlimited Champagne within this, the stadium’s most hallowed space. And that’s just the start of it. Other benefits include valet parking at the nearby Hilton Hotel, the chance to mingle with footballing legends wandering around on match-day, and (another one for the hardcore sports buffs in attendance) tables overlooking the stairway up which players walk to receive winners and runners-up medals.

For foodies, the cuisine, served at members’ own allocated tables (again, the magic of match-day ritual!) will be the biggest draw. The exquisite canapes and unlimited Champagne are bookended by post-match cheese and biscuits, while what comes in between is the remit of one Harry Lomas: a former chef at luxury Hertfordshire hotel The Grove, and a face familiar to many faces thanks to appearances on Saturday Kitchen, MasterChef and Jamie’s School Dinners.

So how does Lomas approach creating menus for such a unique culinary environment? It must surely be a different prospect to the average restaurant scenario? “It’s a real challenge, but one that I love,” he says. “The planning process has to be rigorous – which is where my army background comes in handy. My team of chefs and I always look to work at least six months ahead so that we have time to create bespoke menus tailored to each event.” 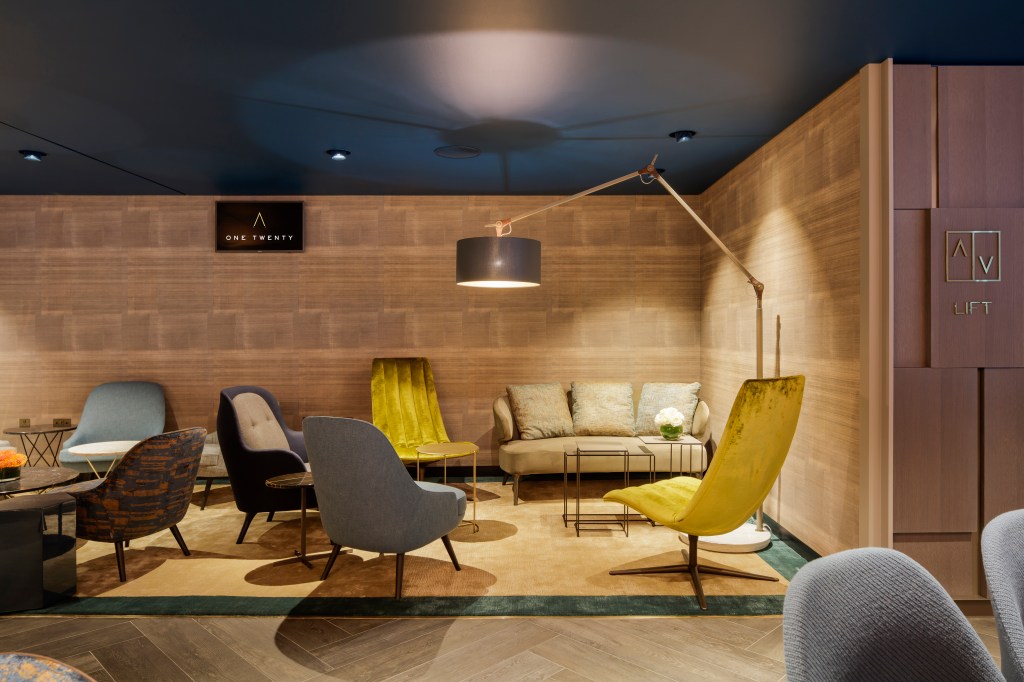 Any examples? “The crowd at The Emirates FA Cup final have different expectations to those at a Spice Girls concert. From my experience and spending time talking to Club Wembley members I have a good understanding of what they would like to eat. We always try to give a nod to what’s happening on the pitch as well. For example, our previous match against Spain we added Gazpacho, Jamon ham and Paella to the menu.”

Another complication, Lomas says, is the sheer volume of people he and his team have to serve quality food to in a short space of time (no one wants to be dining during a match or performance). “The big challenge is speed of service and consistency to ensure all of our members get the best experience – which I’m proud to say we do. I’m always keen to get feedback and take time out to talk to our members after they’ve eaten, which helps me to understand their experience.”

Seasonality, as with any quality dining venue, is key, as is the provenance of the ingredients according to Lomas. “We work with selected suppliers to ensure we have great fresh and seasonal produce  – we want to use it when it’s at its best. A great spring starter dish currently on the One Twenty menu is hand-dived king scallops with texture of cauliflower, crispy chorizo, herb oil, frisse leaf and sweetcorn foam. For something a little more indulgent, we have one of my personal favourites – a sticky stout pudding, with poached dates, date puree, glazed pecans and caramel sauce. I’m a Lancashire lad, so love real hearty food.” 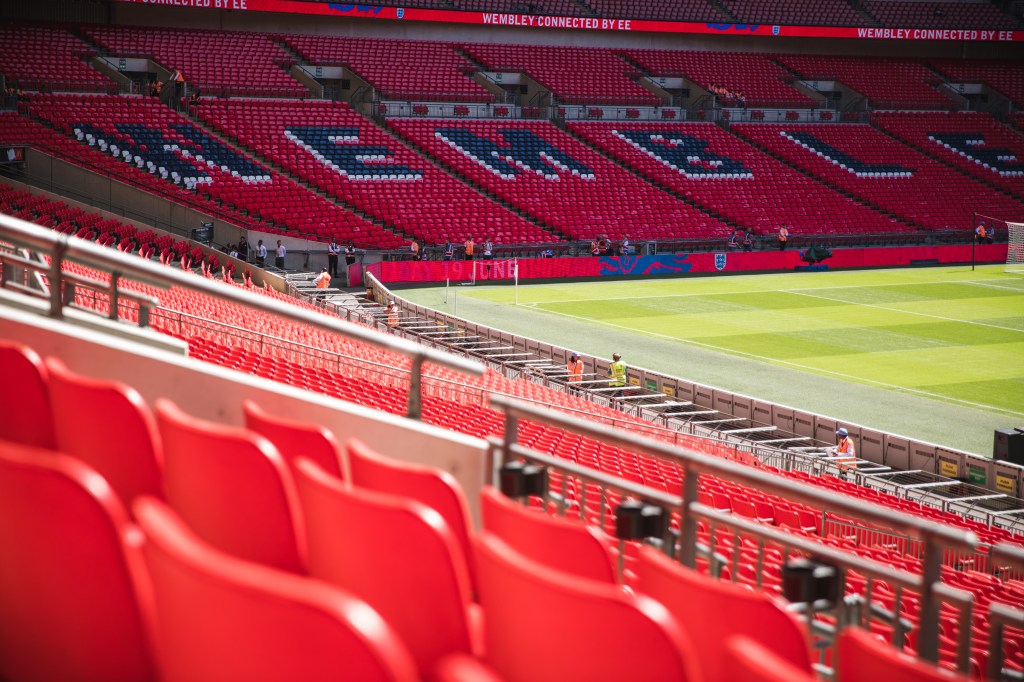 Needless to say, the hospitality packages offer the optimum vantage point over the pitch  MATT MARTIN

Of course, the high-end hospitality offerings don’t end at the One Twenty Club. Private boxes  – eight-seaters, 12-seaters or 20-seaters – are available all around the pitch (from £37,200), while all-event boxes, which include concerts as well as any sporting event, can also be purchased. Then there’s the Connections programme, which includes money-can’t-buy experiences: think tucking into breakfast while the England Manager divulges his thoughts on the team and its future; private Q&As with football legends such as Jamie Carragher and Peter Crouch; access to England training sessions; and children’s experiences such as strolling onto the pitch on match-day with their football idols as an official Player Mascot.

The magic of match-day is an intangible entity. But, tangible luxuries like the above can enhance that magic beyond belief.