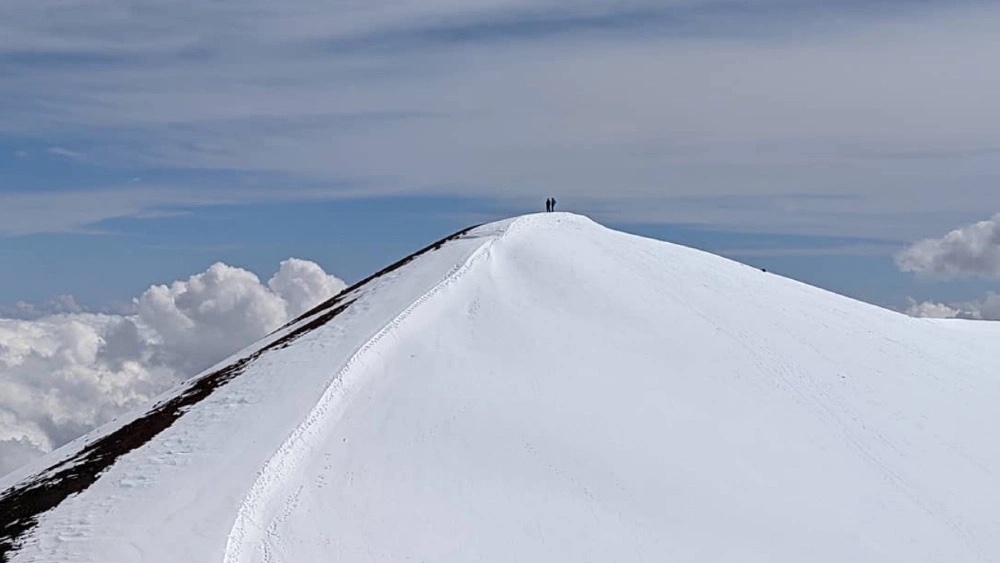 Some people are mountain climbers, others love diving deep into the ocean. Victor Vescovo is both. An investment fund manager who was also a Naval Reserve intelligence officer for 30 years, Vescovo has climbed the Seven Summits around the world, including Mt. Everest, and recently entered the Guinness Book of World Records for diving in a two-person submersible to the deepest parts of the ocean of all seven continents.

Last week, Vescovo and Dr. Clifford Kapono, set a new type of record for diving to the underwater base of Mauna Kea, the volcanic Hawaiian mountain, and then climbing to the summit. “The distance is greater than the height of Mount Everest,” says Vescovo, whose boat DSSV Pressure Drop and submersible, Limiting Factor, had been in Honolulu for five months, prepping for another diving expedition into the world’s deepest trenches in the Pacific. “I’d been thinking about this for a while and figured, why not do something nobody has ever tried before?”

The “Mauna Kea First Ascent,” as the challenge was called, involved diving 16,785 feet to the base of the dormant volcano, kayaking 27 miles in open ocean from to land, bicycling for 37 miles up the mountain, and then climbing the remaining six miles to the summit. It sits at 13,803 feet. Kapono, with a PhD in marine pharmacology, is a native Hawaiian who was very comfortable in the water, but had never done any mountain climbing. 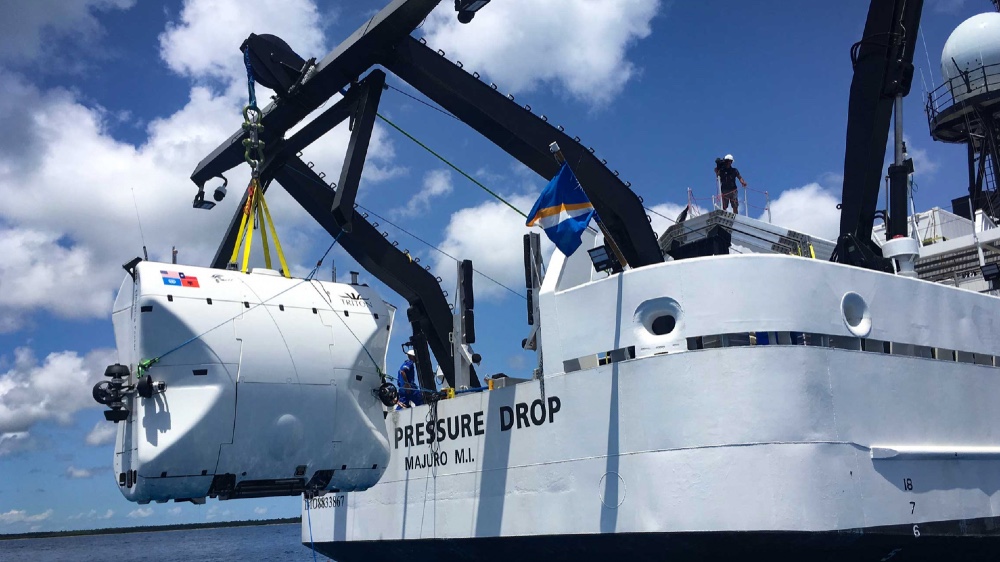 The first stage of the ascent involved the submersible, Limiting Factor, diving 16,785 feet to the base of the mountain. Courtesy Enrique Alvarez

“It felt like a three-day beat-down,” Vescovo told Robb Report. “It was more than a 70-mile lateral trip, the equivalent of a tetrathalon.” The adventure first involved locating the base of the mountain offshore, which turned out to be more than 20 miles from land. Vescovo has taken Limiting Factor all over the world, including multiple dives of the Titanic and other deep wrecks, so that part of the trip wasn’t new for him. “But it was a brand-new experience for Brad,” he says. “He had never seen the marine life and terrain. We also saw volcanic rock that was a million years old—something called pillow lava that looks like tubular layers.”

That portion was straightforward, but then came the kayaking. They had done a reconnaissance trip a few weeks earlier and decided that a three-man kayak would be the most efficient means of travel through the winds and swells. Kapono and the third man, Chad Cabral, were strong kayakers, but Vescovo found it a challenge.

“It was tough,” he admits. “The seas were against us, and none of us had done this as a team before. We just stuck our heads down and kept going. We only took two breaks.” They got in the canoe around 1:15 after completing the submersible dive, and made landfall by 8:30, just before dark. 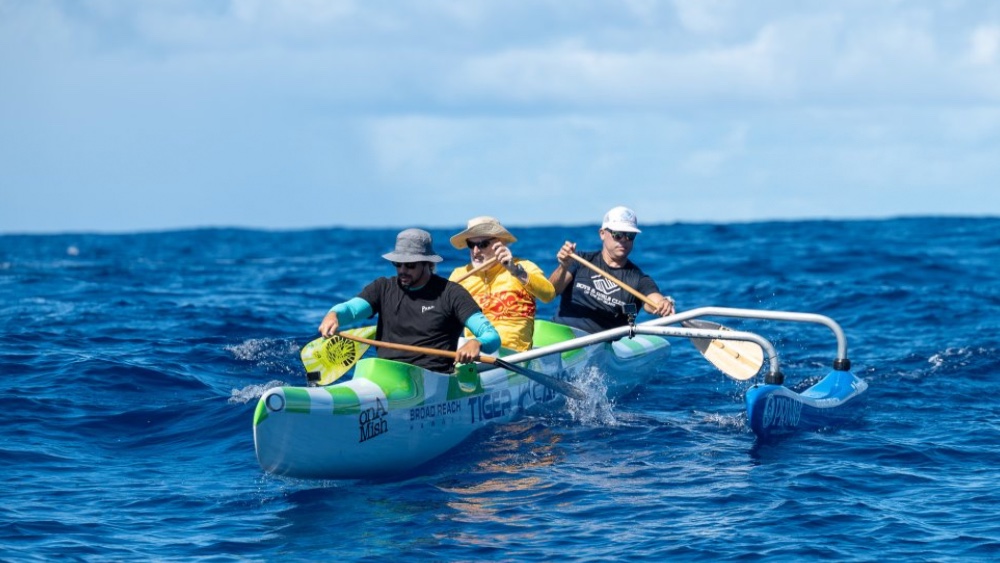 The second part of the adventure involved a 27-mile open-ocean kayaking trip with winds and currents running against the team. Courtesy Enrique Alvarez

On land the next day, Vescovo and Kapono biked up Mauna Kea’s mountain roads, stopping for the night at the visitor center’s lodge. “It’s 37 miles overall, with the equivalent of two miles vertically,” says Vescovo. “We were riding up through clouds and it was getting cold. When we started it was in the 70s and when we arrived it was in the 50s.”

The final day involved climbing six miles to the summit. “We’d had an uncharacteristically heavy snowfall, so we were kicking steps into the snow,” say Vescovo. “Cliff had never been at altitude on the snow, so he was struggling a bit. It was the reverse of the kayak.” After about five and a half hours, the pair made it to the summit, making them the first to ascend the full height of Mauna Kea.

Vescovo says the three-day adventure was much easier than climbing Mount Everest. “You’re not dealing with sub-zero temperatures the whole time,” he says. “It was more like a mini-triathlon.” 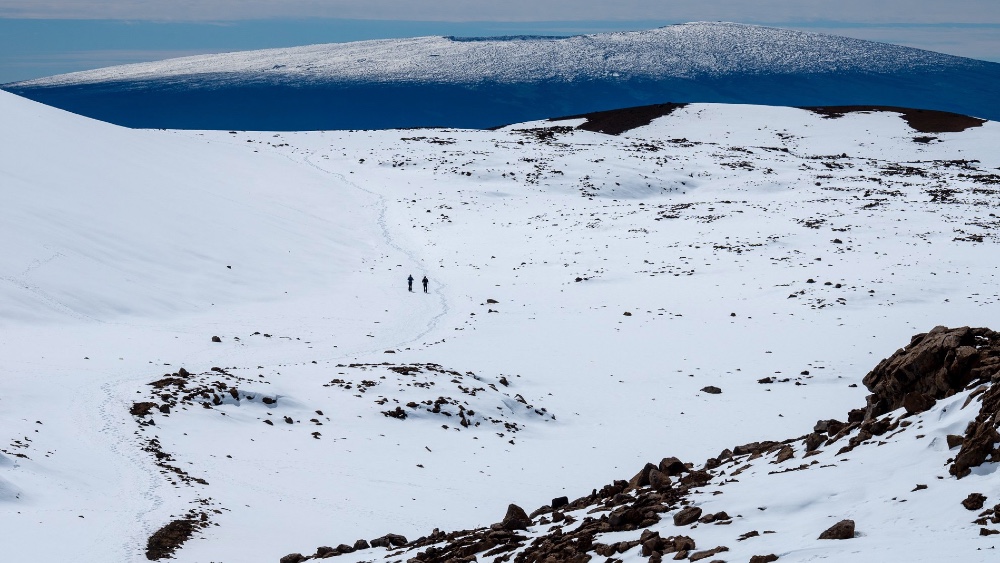 The last part of the ascent was done after a heavy snowfall, which left the pair “kicking steps” into the snow to reach the summit, according to Vescovo. Courtesy Enrique Alvarez

Next week, DSSV Pressure Drop and Limiting Factor will be heading off for deep-sea exploration. The research vessels will be in the Philippines for further exploration of the Challenger Deep, the deepest trenches in the world’s oceans. “We’ll be doing geological missions on the dives,” says Vescovo. “We’ll also attempt to find the wrecks of US destroyers that were lost in World War II. It promises to be a very different type of adventure.”