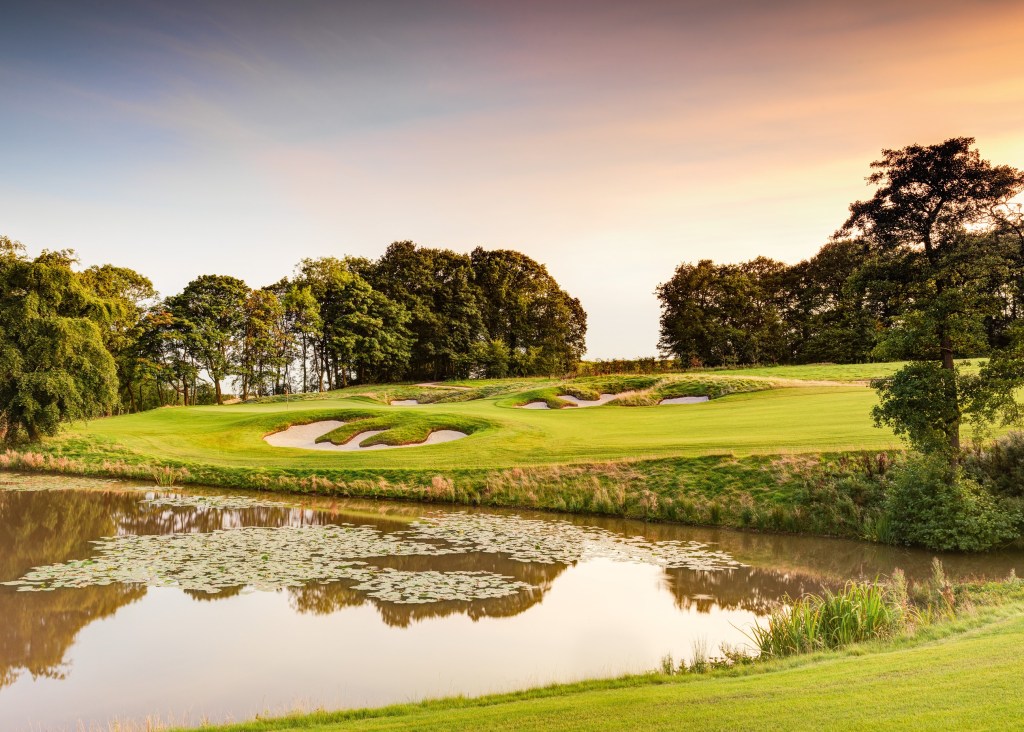 Golf, Middle England’s favourite pastime, has been used to sell all sorts of things over the years. Pringle jumpers, for one, while car salesman have been using golf clubs as a standard unit of boot measurement since the 1950s. Soon, if JCB has anything to do with it, it’ll be used to sell big yellow diggers, too.

To explain. In summer 2018, the British construction giant opened its first golf course, next door to its Staffordshire headquarters. Set in rolling countryside, the JCB Golf and Country Club has been built with one thing in mind: to host a professional golf tournament, preferably on the US PGA Tour, and in turn to attract new buyers Stateside. JCB believes golf is the key to unlocking the US market. 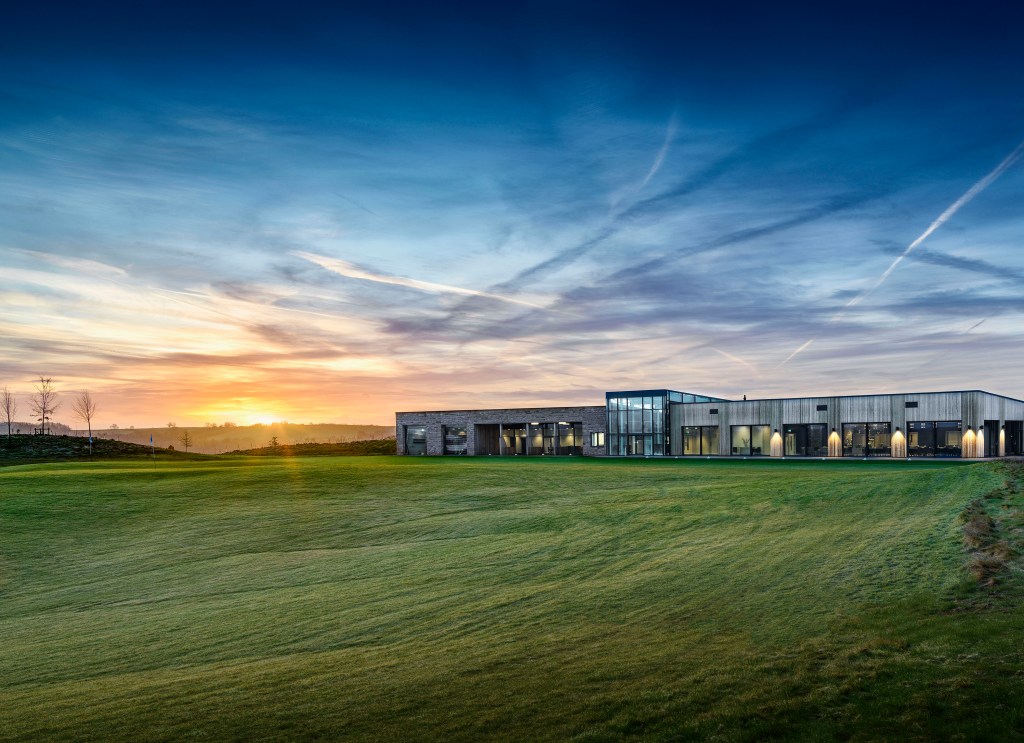 The Clubhouse at dawn  Guy Dixon

It’s easy to understand why it would want to. According to Trading Economics, the US construction market is worth $1.3 trillion annually. US sales of excavators, loaders and other machinery is dominated by Caterpillar and John Deere. Caterpillar’s revenues were $54.7 billion last year. John Deere’s were $37.4 billion. JCB is a big multinational corporation and its chairman Lord Anthony Bamford is a billionaire several times over, but its revenues of £4.1 billion ($5.2 billion) over the same period shrink in comparison.

JCB doesn’t publish its US market share, but it’s believed it’s in the low single figures by percentage. Furthermore, it’s understood that if it could double that figure, it would double its global turnover. Could golf really do that? Maybe. In the US, the sport is massive – and still growing. The US Golf Economy Report’s most recent figures, produced in 2016, indicate that it’s worth $84.1 billion annually, up from $68.8 billion in 2011. Last year, NBC Sports recorded that 77 million unique viewers tuned into its coverage of the sport. Americans love their golf. 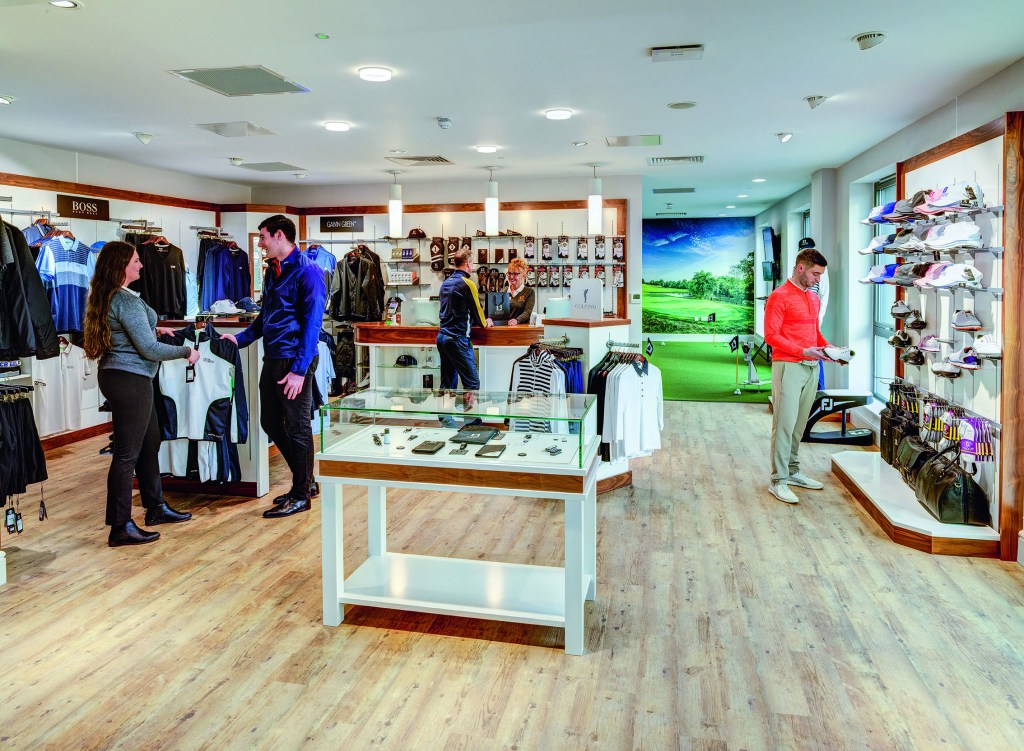 What’s not entirely clear is whether there’s a tangible link between golf and construction, but JCB’s US competitors are already leveraging the sport. Since 1999, John Deere has been the headline sponsor of a tournament on the US PGA Tour, where most of the world’s top 50 golfers ply their trade week in, week out.

Caterpillar recently pitched in with a marketing campaign featuring Japanese professional golfers Erimo and Marimo Ikeuchi trying to hit greens sitting on top of giant loaders as they drove around the Arizona desert. It’s a wonder JCB hasn’t teed it up before now in pursuit of the all-powerful American dollar. 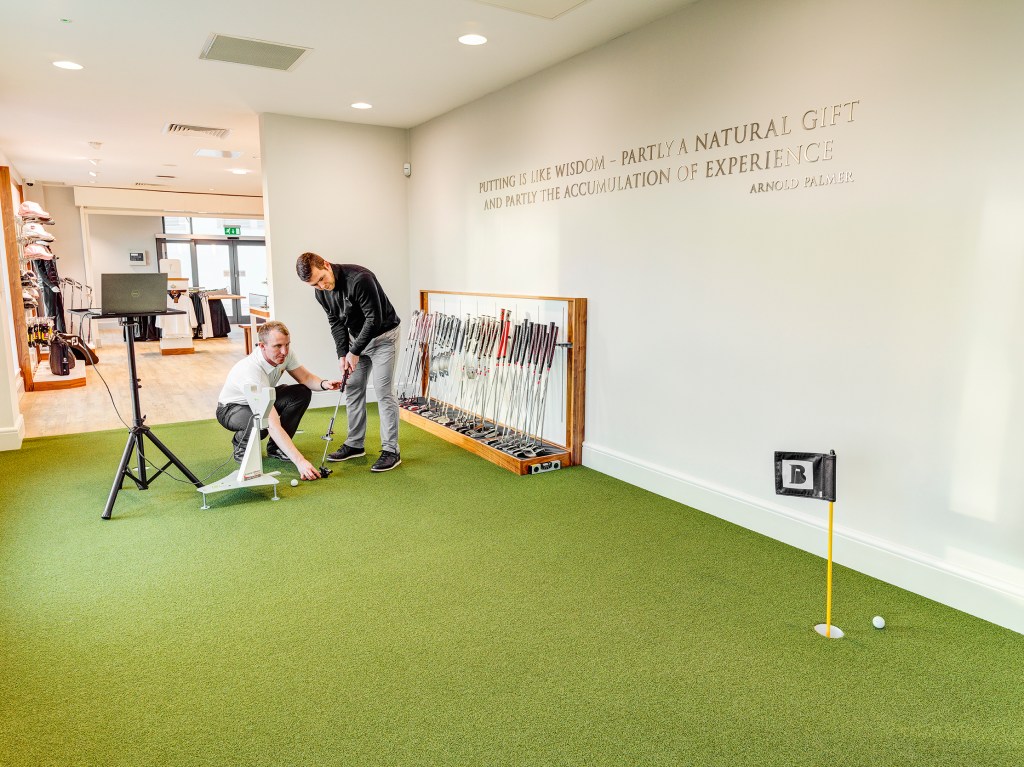 JCB says negotiations with both the US PGA and European Tours about hosting a tournament in 2021 are already advanced and that an announcement should be made by the end of the year. If JCB can agree terms with the American powers-that-be (it can cost tens of millions of dollars to host a Tour-sanctioned event), it would be the first US PGA Tour event to be held in the UK, excluding the Open Championship, one of the sport’s four majors.

In case there were any doubt about where JCB’s ambitions lie, it has a novel membership set-up. Unlike even the most exclusive clubs in the UK, it won’t be offering memberships to individuals, only corporates.

So far, most of its 100-odd members are JCB dealers, suppliers and customers. The idea is to increase numbers, but not by much. Members are invited to buy three-year memberships starting in the region of £20,000 a year, which buys them a certain number of rounds that can be used for company golf days, client entertaining and so on. Those rounds can’t be sold, but can be given to charity and auctioned. Curious golfers won’t be able to play the course as a visitor either, no matter their fame or fortune. 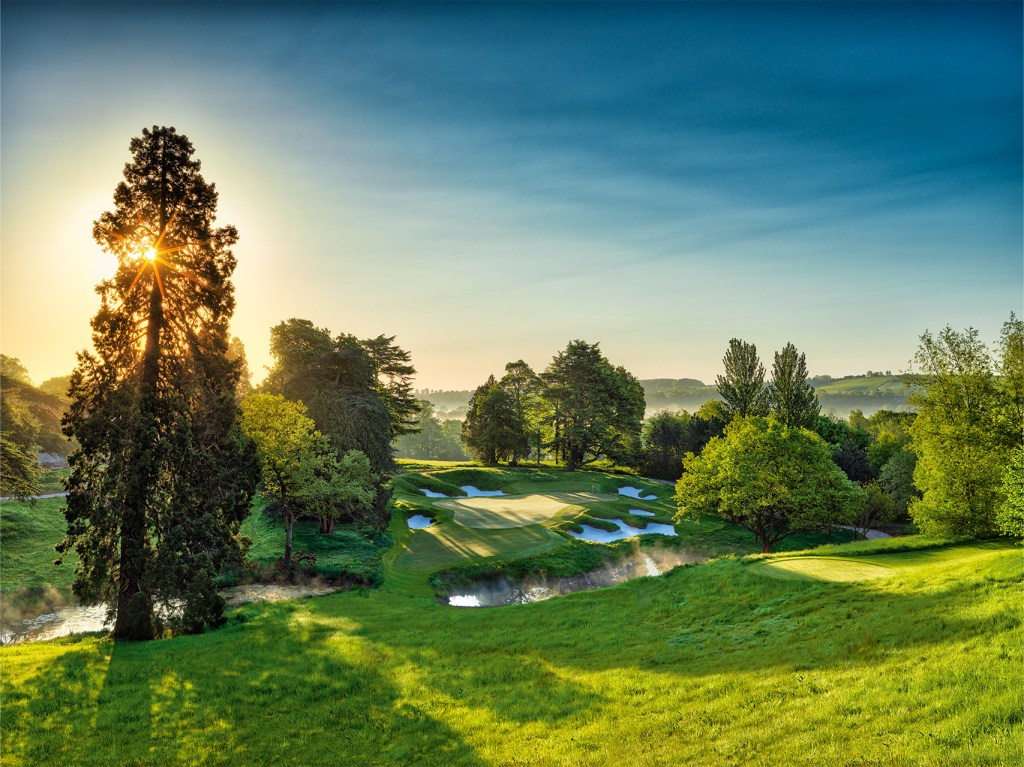 While the model will frustrate those nomadic amateur golfers, JCB is not expecting to get rich from it either. The club says it’s a break-even project, a successful membership programme being secondary to the greater ambition of securing a Tour event and taking the JCB name global.

For now, work on the club is ongoing. The championship golf course is complete (it opened last June), as are the range and academy, and 10 lodges, completed in September this year. A clubhouse, a 40-room hotel and the conversion of a beautiful old ruin into a starter’s hut and halfway house are due to follow, although no opening date has been announced. Likewise, the project budget hasn’t be made public. 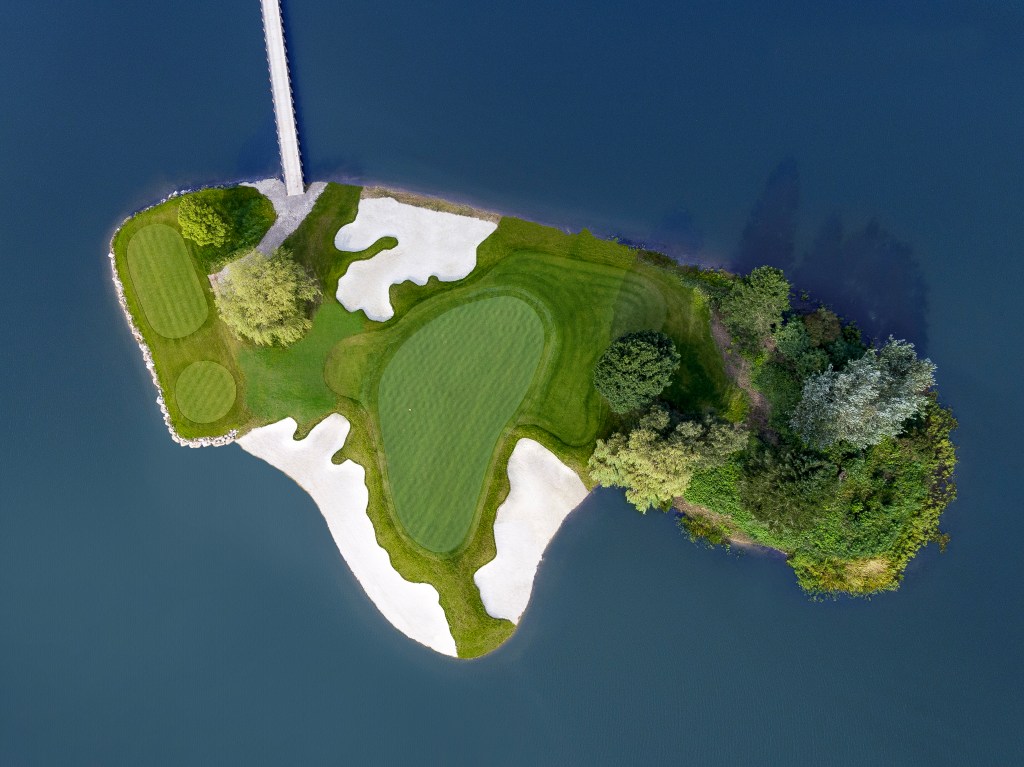 An aerial view of hole 17

The course has the hallmarks of a tournament layout. Designed by one of this generation’s lodestar course architects, Robin Hiseman of European Golf Design, it took four years to build (JCB says its excavators shifted 650,000 cubic meters of earth during construction) and sits in a picturesque stretch of Staffordshire’s undulating landscape. It measures 7,300 yards from the tips, and has several memorable holes, including the island green par-three 17th, which from the championship tees will stretch to 255 yards over water.

Lord Bamford, who isn’t a golfer, is said to have specified white sand for the course’s 100 bunkers, as opposed to the orangey denomination common to courses on these shores, a shrewd call that gives the JCB the look of an American track. And the golf industry rates it. In October, it was nominated for the world’s best new course at the World Golf Awards. 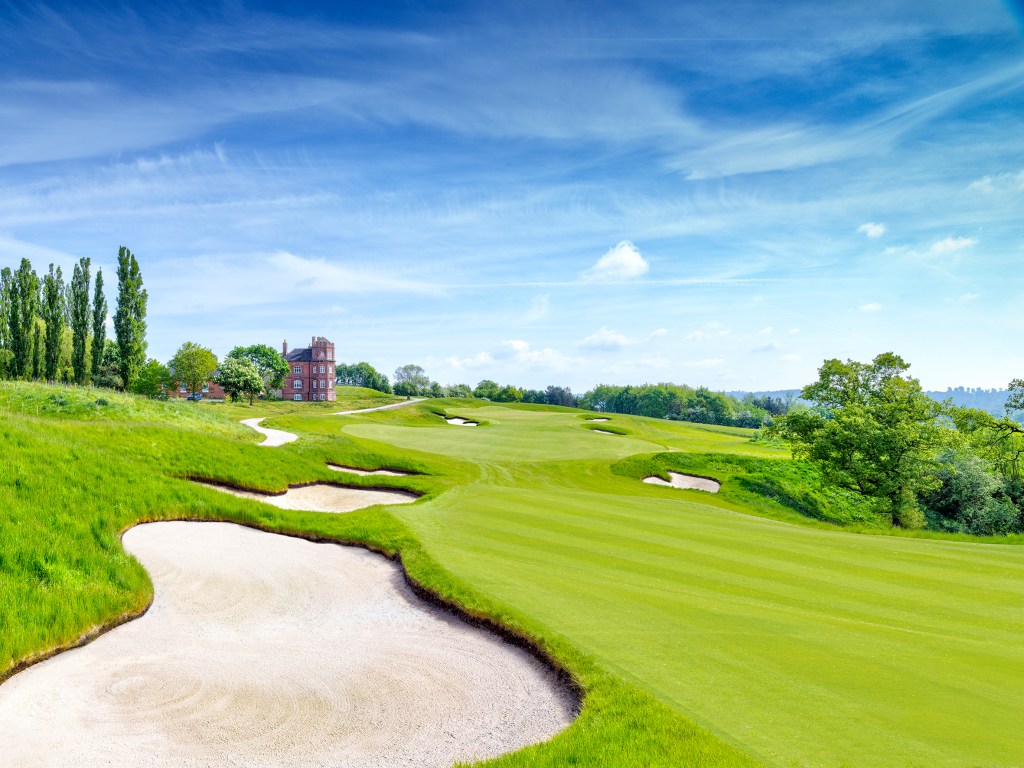 At this point, we’re left guessing as to whether JCB’s plan will work. It’s bold to say the least, and failure to land a tournament would prove a fatal blow to the vision, and perhaps the budget, too. Although you suspect that even then it would be some time before the company decides to activate a plan B (if there is one) to adopt a traditional member-visitor model. What’s a few billion in annual revenues compared to a couple of golf memberships?