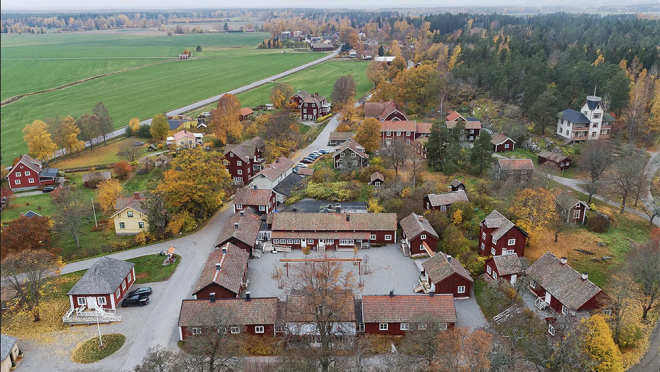 If there’s one thing we could all use after living under coronavirus-induced lockdown, it’s space. And lots of it. As sprawling as a mansion may be, no estate can’t compete with a whole village when it comes to sheer acreage. And it just so happens that a quaint little hamlet in Sweden just hit the market.

Yes, Sätra Brunn, a small spa town in the south of Sweden, is up for sale. Put up for bid this weekend by Christie’s International Real Estate, the property includes the entire village and every building located within its limits.

Located in the Sala Municipality in Västmanland County, Sätra Brunn’s history dates back to the very beginning of the 18th century when the land was purchased by doctor Samuel Skragge. The hamlet is built on top of an underground spring, which is alleged to have healing properties and is home to a famous holistic research treatment center that was in operation from 1747 until 1999, as well as a hotel, the Nybygget (“new building”), that was the country’s largest upon its completion in 1792.

In addition to the insane bragging rights that come with owning your own village, the winner of the auction will also be purchasing 62 acres of picturesque land, along with the town’s 70 buildings, many of which were built using locally sourced timber. Among the structures are several historical residential spaces, which the current owners claim are only in need of minor work. There’s also a bottling plant, preschool, conference center and a gym.

The village is currently owned by a group of 15 Swedes who purchased it in 2002 in order to protect its legacy. Although the town produces 30 to 40 million Swedish krona ($3.25 to $3.7 million) in business income each year, one of the owners, Mats Wikman, recently told the New York Times that they are looking for younger owners who have the energy and time needed to keep it running.

While relatively unknown, Sätra Brunn is one of several health villages built in the country during the 18th century. But it is also one of the best preserved. Because of that, Wikman said he believes it should be “regarded as a world heritage site.”

So, if you’ve ever dreamed of owning your own personal European village, now’s your chance. Bidding for Sätra Brunn is currently up to 77,000,000 Swedish krona or roughly £6 million.