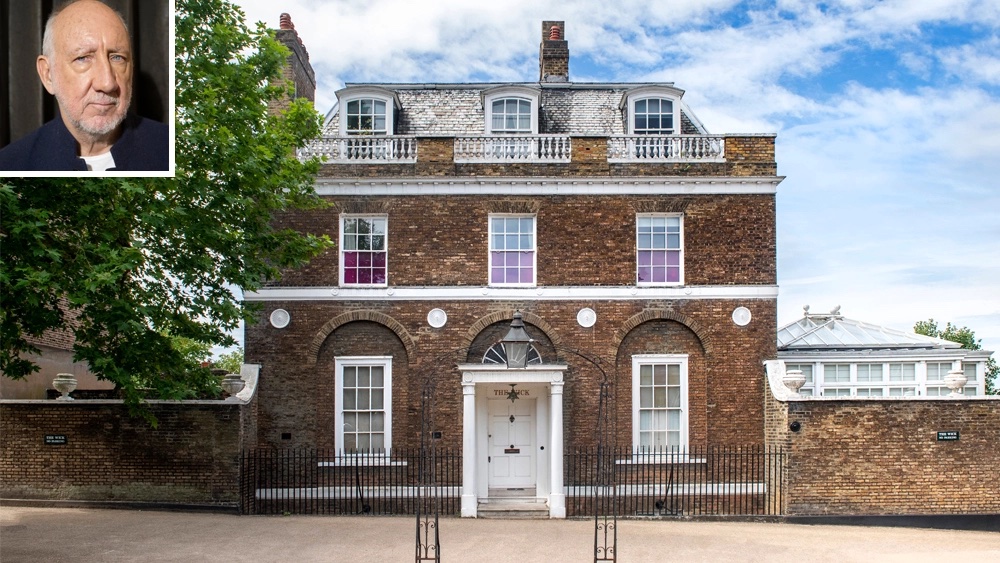 Rock ‘n Roll royalty has passed through the doors of this magnificent London mansion built in 1775—and probably all-too-often passed out on the floors. For a quarter-century, The Wick, as the house is known, has been home to legendary The Who lead guitarist and co-founder Pete Townshend.

Perched on a hilltop in the leafy West London suburb of Richmond upon Thames, with jaw-dropping views of the River Thames below—the view is so special it’s protected by a 1902 British Act of Parliament—this four-story, six-bedroom mansion offers over 8,500-square-feet of interior space.

Before Townshend bought it, it had been owned by Rolling Stone Ronnie Wood who had converted the home’s one-time billiards room into a recording studio.

It was here where the likes of Clapton and Bowie, Jagger and Richard, Harrison and McCartney—entering through a discreet side-street door—frequently showed-up to jam.

“We’d fall asleep on the studio floor and wake up to find a room full of musicians who hadn’t been there when we crashed,“ Wood wrote in his 2003 book Ronnie: The Autobiography.

The Wick offers views of The Thames. Photo: Courtesy of Tom St Aubyn for Pereds.com

But according to Perry Press, of London estate agents Pereds, that holds the coveted listing, an equally fascinating and star-studded part of the home’s history was when Ryan’s Daughter actor Sir John Mills owned The Wick.

“He had lots of photos of The Queen Mother around when she visited  the house, and told us stories of Sir Laurence Olivier and Gone With The Wind’s Vivien Leigh acting out a scene from Romeo and Juliet in front of the drawing room fireplace,” he tells Robb Report.

“Almost as soon as he sold it to Ronnie, he was calling us to see if it was possible to buy it back. Either he was sentimentally devoted to the place, or just couldn’t make up his mind,” says Press.

The Rolling Stone guitarist, who recorded two solo albums at The Wick, would go on to sell the house in 1976 to music industry executive Derek “Dick” Leahy who produced George Michael, Donna Summer and Britain’s Bay City Rollers band.

The Grade 1 listed Georgian-style mansion was designed in 1775 by eminent architect and engineer Robert Mylne for a Lady St. Aubyn. It was built on the site of the Bull’s Head tavern and was steps away from the then newly created 2,500-acre Richmond Park—still the largest royal park in London.

The bathroom. Photo: Courtesy of Tom St Aubyn for Pereds.com

“The design is like a doll’s house and gives the illusion of being much more modest in size than it is. The home was Listed Grade 1 in 1950 for its architectural and historic interest,” says Pereds’ Press.

Key features include stunning, oval-shaped living rooms with stately fireplaces, vaulted ceilings, an elegant drawing room with views of the river, a glass conservatory, a heated pool and pool house, a large storage cellar, plus secure parking for a dozen cars.

As for that famous basement recording studio, little is left. One of the rooms was turned into a wood-panelled TV room, while the other is, according to Press, ripe for converting into a gym.

The studio where the Stones jammed is now a TV room. Photo: Courtesy of Tom St Aubyn for Pereds.com

Why has Townshend, 76, decided to sell? According to Press, he and his composer wife Rachel Fuller came to the decision after spending over a year in Covid-19 lockdown at their Oxfordshire country home, Ashdown House. With a luxury apartment in Central London as well, seems The Wick has become what Press calls “surplus to requirements.”

But don’t expect too much negotiation on price: Pete is only accepting offers “in excess” of £15 million.

As for kicking back on the home’s 200 feet of terracing with sweeping views of the Thames, and thinking of all the great music created in the basement below? Priceless.

Check out more photos of the property below:

The Wick  Photo: Courtesy of Tom St Aubyn for Pereds.com

Fancy Indulging Your Inner Don Corleone? You Can Now Stay At His Mansion On Staten Island