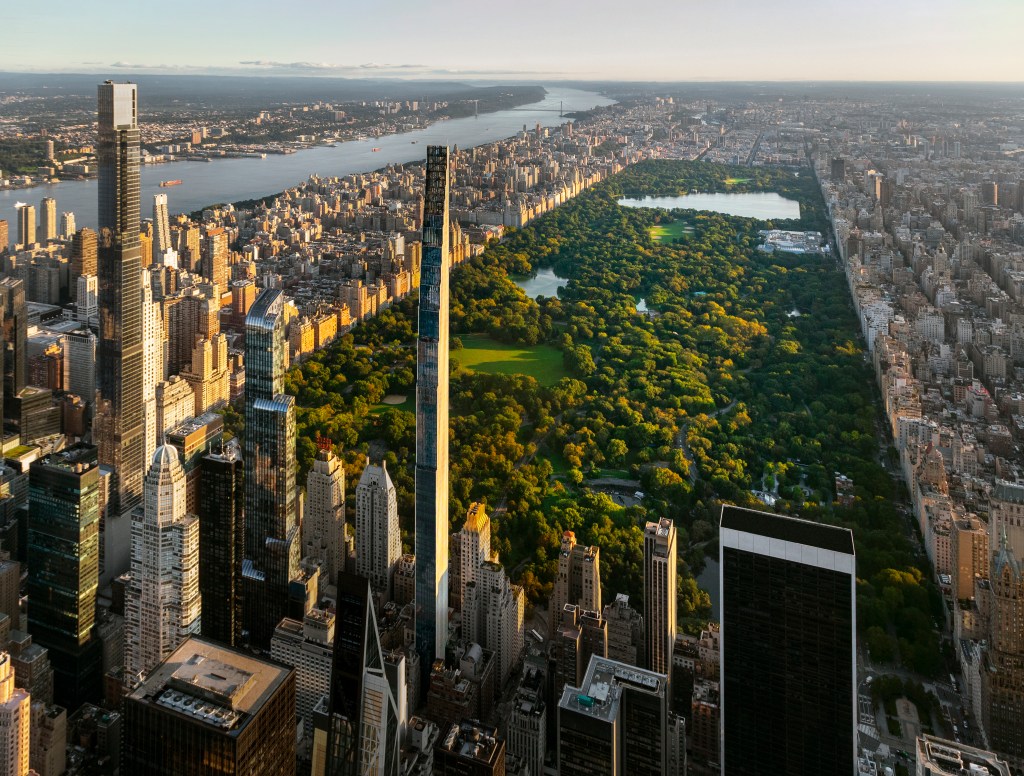 Back in September 2020, our US edition got a first look at two extravagant units inside 111 West 57. Though both units were finished at the time, and were selling for a whopping $105 million (roughly £84,000) collectively, contractors were still putting final touches on the world’s skinniest skyscraper. Now, six months later, construction has finally finished on the striking, SHoP Architects-designed building, which is also known as Steinway Tower.

Located on Billionaires Row, the tower was announced in 2013 and by the following year, ground had broken on the project that its New York City-based architects envisioned would have a slim width ratio of just 24:1. The residence is also currently the second-tallest building in the Western Hemisphere: It reached 984 feet back in 2018, and today stands a neck-breaking 1,427 feet tall. It’s now also capped by a triplex penthouse that offers breathtaking views of Central Park, the skyline and beyond. The icing on top? Residents have access to a luxe amenity suite that includes an 83-foot lap pool, communal outdoor space and concierge.

A view of the New York cityscape from inside 111 West 57.

As futuristic as the tower may feel in the midst of old-world West 57th Street, the project is actually a marriage of the past and future. JDS Development Group, Property Markets Group and Spruce Capital Partners own and developed both the tower and the adjacent Steinway Hall, a landmarked 1925 building that once housed the offices of premier piano makers Steinway & Sons as well as a famed concert hall and cultural centre. On 2014, JDS broke ground on converting the interiors of the historic building and creating luxury residences to match the tower next door.

The tower accommodates just one residence per floor. Together, the 84-story skyscraper and Steinway Hall feature 60 condos designed by Studio Sofield. Among them are Residence 70, which was picked up by an international buyer who only ever viewed the apartment virtually and signed for it less than 30 days later. Meanwhile, the tower’s Triplex Park Loggia Penthouse 72—currently the most expensive unit in the building to date—has listed for $66 million (just over £52 million).

The pool inside the tower’s luxe amenity suite.

For those in the market for something a little closer to earth, the penthouse at Steinway Hall may be a suitable alternative. The 5,269-square-foot duplex offers treetop views of Central Park via its two floors, as well as three bedrooms, four-and-a-half baths, a kitchen with gorgeous Cristallo Gold quartzite countertops and custom smoke-grey solid-oak floors throughout. It even features a great room with 26-foot vaulted ceilings and arched glass doors that open onto a terrace.

Whichever building you choose, the joint project is quite the spectacle. Other work from designers SHoP Architects includes the Barclays Center, Uber HQ, the LaGuardia Airport renovation master plan and the Brooklyn Tower, another skyscraper that stands high above its neighbours.

For more information on 111 West 57, visit the building’s website.