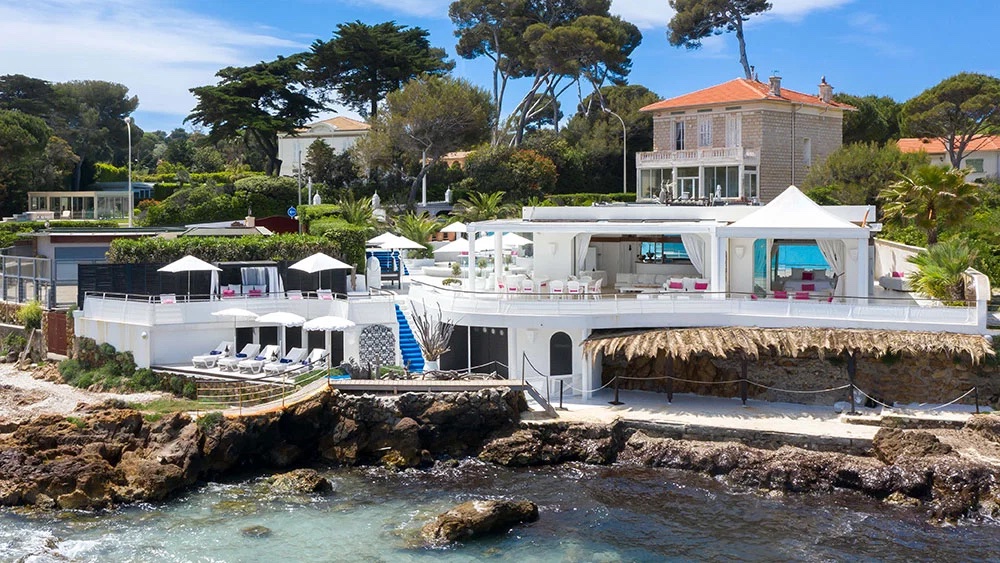 For almost a century, it was arguably the best beach bar on the Côte d’Azur. It hosted the likes of Hemingway and Picasso, Churchill and Connery. Even former presidents Harry Truman and JFK stopped by. Édith Piaf held her engagement party here, with no regrets.

Nestled on a sandy beach on Cap d’Antibes, one of the world’s priciest spits of land between Cannes and Nice, Villa La Garoupe sits on a stunning horseshoe bay with views out across the turquoise Mediterranean and snow-capped Alps in the distance.

Back in the 1930s, wealthy American socialites Gerald and Sara Murphy partied with their A-list celebrity friends on the bar’s wooden decks. When longtime owner Jeannine Giotti turned it into an exclusive beach club in the ’40s, it became the Riviera’s must-visit hot spot.

JFK and friends stopped by Villa La Garoupe when staying at the nearby Cap-Eden-Roc hotel. Photo: Courtesy of Cap Villas

Fast-forward to 1999, and La Garoupe was bought by a wealthy Parisian couple who ran it as an exclusive restaurant until 2007. That’s when they transformed it into a one-of-a-kind, beachfront villa designed for family fun.

“After over 20 years of owning this remarkable property, they’ve decided to let someone else write the villa’s next chapter,” Emilia Jedamska, listing broker at Cap Villas tells Robb Report. “This is a once-in-a-lifetime opportunity to own a piece of Riviera history.”

She says that the €10.5 million asking price not only reflects the villa’s storied history, but also its unique position right on the sandy La Garoupe Beach.

“So much of the South of France has its beachfront occupied by hotels and apartment blocks. It’s rare to find a property like this that’s right on the water with its own beach. Especially on Cap d’Antibes,” Jedamska explains.

In the makeover from beach club to luxury villa, she says the owners were determined to keep the original character of the place. While the property homesite sprawls over 7,500 square-feet, the villa itself covers just 1,650.  Although there are four bedrooms and three bathrooms, the spaces are compact. A kids’ bedroom is in a cozy crawl space in the roof.

What the villa has in abundance, however, is endless terraces and wooden decks for soaking up the sun, entertaining and just chilling. Tucked away on one side is a plunge pool for cooling off, while steps lead down to its own small, sandy beach.

“For some buyers, the negative will be the lack of privacy. Your neighbours are beach bars and cafes. This isn’t the place to buy if you want peace and tranquility. This is a second, or third home where you go just to have fun,” says Jedamska.

Of course, for budding Daniel Bouluds, the villa could easily be returned back to a fancy beach club or upscale eatery. The owners have even kept the relevant food and booze licenses up to date. Even the original “Garoupe Beach” sign is still attached to the side of the home.

According to Ms. Jedamska, before covid the villa had been doing a roaring business being rented-out as a venue for stylish birthdays, weddings and special events. A Russian oligarch recently threw a huge party for over a hundred of his closest friends.

The living room and bar, like the bedroom, have easy access to the beach. Photo: Courtesy of Cap Villas

Talking of parties, Jedamska says that until the villa is sold, it can be rented for around 24,000 Euros a week. It’s already booked from mid July to the end of August. Don’t even ask about renting during next week’s Cannes Film Festival.

Electronic gates off winding Chemin de la Garoupe open into the villa’s private two-car parking area. Walk to the front of the home all you see is an expanse of Mediterranean with waves splashing on to the rocks below.

Glass pocket doors open-up both the living area and the adjoining master suite, with plenty of outside overhangs to give welcome shade from the sun.

Living spaces look out over the beach. Photo: Courtesy of Cap Villas

There’s a tiny kitchen but don’t expect to do major food prep here; that’s why they have caterers on speed dial. Remember, the legendary 150-year-old, five-star Hotel du Cap-Eden-Roc hotel, with its Michelin-starred Louroc Restaurant, is an easy a five-minute drive away.

Check out more photos of Villa La Garoupe below

The kids sleep is in a crawl space in the roof. Photo: Courtesy of Cap Villas

Fancy Indulging Your Inner Don Corleone? You Can Now Stay At His Mansion On Staten Island