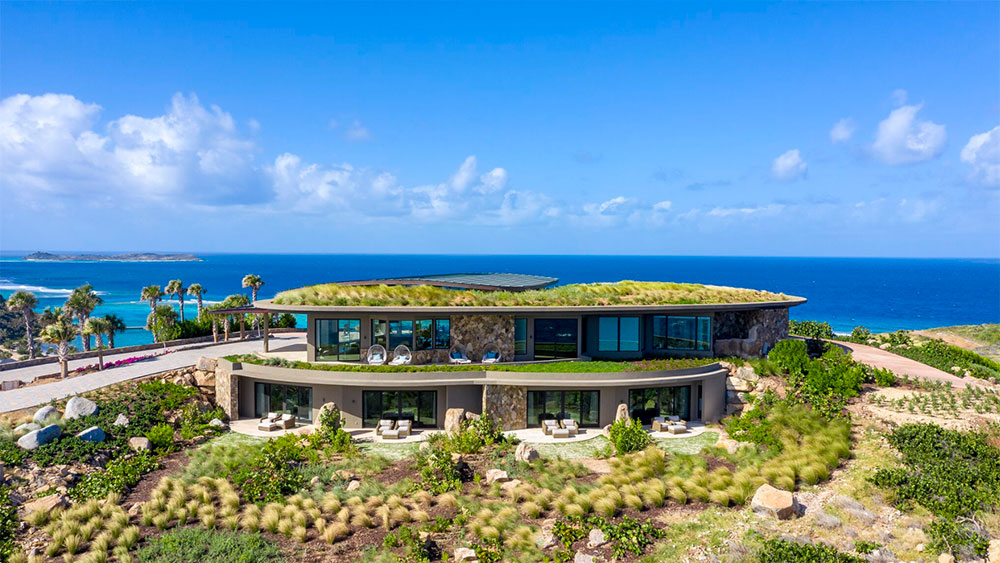 Forty years ago, developer David Victor Johnson took a fateful dive into a pool that left him paralyzed from the shoulders down. Up until then the goal he’d set for himself was for his company, Victor International, to claim 10 percent of new home construction in America. But, as he likes to say, “When you have bolts screwed into your head and you’re paralyzed, money, God and friends get put in perspective.” After miraculously willing himself to walk again—Johnson is nothing if not tenacious—he resolved to dedicate his career to building unique generational communities that were in harmony with nature. He considers Oil Nut Bay on Virgin Gorda in the British Virgin Islands the pinnacle of this mission, and the 8,000-square-foot house he built there for himself and his wife Pam his masterpiece. With advancing years, however, he feels it’s more house than they need, so Johnson is moving elsewhere in the resort and offering the residence, the final project of esteemed architect Ken Kao, for sale.

Purchased as is—Halo, the main house, and a one-bedroom guest villa dubbed Rainbow on 12.25 acres—the price is just over £30 million. But within the year, Johnson plans to build three more guest villas (including what he calls “a music cave”) on this spectacular elevation, which takes in both coastlines of the island. With these added structures, the price rises to around £34 million. Property owner and resort club fees come to around £46,500 a year, but can be trimmed to around £23,600 annually if the buyer elects to enter the residence into Oil Nut Bay’s rental pool.

Halo has had a tempestuous history. It’s the first truly modern home Johnson commissioned for his personal use. “Here, you’re walking around connected to the sea, rocks and cliffs. Any kind of traditional house would have destroyed that feeling,” he says. He met Kao first on Richard Branson’s Necker Island, then at Harvard during one of Johnson’s annual lectures to world business leaders. The two hit it off immediately.

But Kao’s original design called for four large concrete columns that Johnson felt cluttered his view. He requested they be taken down and replaced with massive horizontal structural beams clad in hand-hewn walnut, which now enable 24-foot-long motorised glass doors to open to the outside and unobstructed vistas of Necker and Anegada in the distance. Halo was almost completed by the time Hurricane Irma hit in 2017, but was still waiting on a front door. Though the solidly built structure of steel, local stone and glass suffered no damage, interior cabinetry was completely ripped off the walls by winds that reached 177 miles per hour. Undeterred, Johnson ordered new bespoke Italian cabinetry and a kitchen counter façade of backlit onyx.

The living room opens to the deck. Courtesy of Victor International

The five-bedroom, six-and-a-half bath home’s round, glass-ringed shape, integrated natural boulders and soaring cantilevered eaves recall John Lautner’s house for Arthur Elrod in Palm Springs, which received cinematic exposure in the James Bond film Diamonds Are Forever. (007’s tussle with martial arts sentries Bambi and Thumper was filmed there.) The house exudes Sean Connery-era Bond cool, thanks to its sleek interiors, which were a collaboration between Pam Johnson (who has her own design firm, Victor Interiors) and French luxury firm Roche Bobois. Many of the company’s iconic designs show up in these rooms, including the Flight chair, Aqua center hall table and Beach Bay sectional. (Both prices for the estate include existing furnishings.)

The main level with its soaring 18-foot ceilings accommodates a large open-plan living-dining area and a kitchen showcasing high-end Gaggenau appliances, the master suite and a wood-paneled, state-of-the-art media room soundproofed with 16-inch-thick walls. Downstairs are four additional bedrooms with en suite baths and private patios. The outdoor spaces encompass an infinity pool and a dining area sheltered from the wind by a stack of boulders, down one side of which water cascades into the pool. There is also a bronze waterfall wall defining one end of the indoor dining area. Everything, of course, is automated. “You can even control the three speeds of the waterfall from your phone,” says Johnson.

Unlike the Elrod house, Halo has a 7,450-square-foot green roof that helps regulate interior temperatures and also blend the structure into the hillside. The landscaping throughout the property is by award-winning landscape architect Raymond Jungles. Oil Nut Bay already converts saltwater to fresh through two reverse-osmosis systems and also collects rainwater for reuse. But in the next few years, observes Johnson, the community will be completely carbon neutral.

Up in what is called the Atlantic Ridge neighborhood, Halo and Rainbow enjoy complete isolation, yet are just minutes away by electric cart ride to all the resort’s amenities. These include a marina village, two helipads, three restaurants, a beach club, watersports, tennis courts, on-site clinic and, importantly, a private clubhouse for owners only. “There are 12 other homesites that can accommodate houses like this,” notes Johnson. “We built Halo and Rainbow to demonstrate what is possible.”

Check out more photos of Halo below:

The bar. Courtesy of Victor International

The Roche Bobois seating comes with the home. Courtesy of Victor International

One of five bedrooms.

The home has a green roof. Courtesy of Victor International