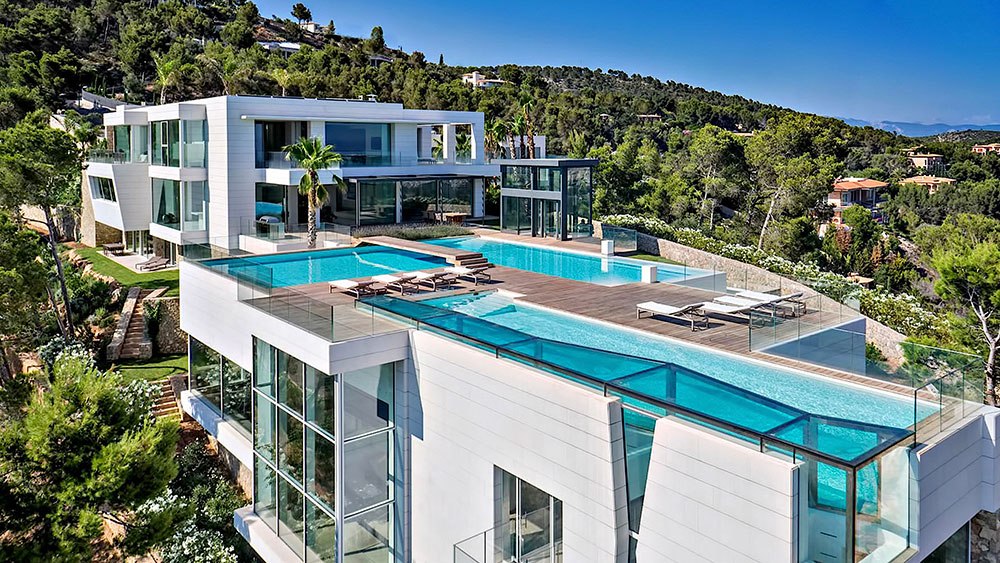 Sir, the Eurocopter is on final approach. Better prepare the helipad.

In the distance, you hear the thrash of a chopper’s rotor blades. A close-up shows a finger punching a bright-red button. Then slowly, but surely, the swimming pool floor rises up, water drains away and the helicopter swoops in to land.

It could be a scene straight out of the latest 007 movie.

But it’s more likely to be a potential buyer swooping in to take a closer look at Villa Chameleon, this spectacular Bond-worthy compound high up in the hills above Palma, on the Spanish island of Majorca, that’s just been listed for 29.5 million euros, or roughly £26 million.

That levitating helo pad is just one of a multitude of jaw-dropping features of this architectural masterpiece in the celebrity-rich, hilltop enclave of Son Vida, a 10-minute drive from Palma old town.

As the villa’s name suggests, this 27,000-square-foot, three-building compound is capable of changing its colours come nightfall.

Thousands of LED lights embedded in the home’s glass balconies, throughout the interior, in each of the two oversized swimming pools and edging the walkways can, at the touch of a remote, be programmed to glow in a multitude of hues.

To produce the maximum effect, the panels were specially etched to allow the light to spread through the glass, delivering an eerie glow. Take your pick from deep red, to lime green, to deep purple, to bright blue. Or a combination of each.

And with more than 50 percent of the home’s exterior being made up of huge, triple-layer panes of glass, the glow of colored LEDs from inside the house is just as dramatic.

The pool really does transform into a helipad. Photo: Courtesy of Engel & Völkers

Built back in 2012 by a Swiss-German consortium, Villa Chameleon clings to the edge of a hilltop on a tight 70,000-square-foot lot and comprises three separate buildings.

The three-story main house has on its first floor the main living area and professional-grade kitchen, a dining room, a TV lounge, library and cinema. Huge glass doors open up to give access to the pool area.

A glass elevator takes you down to the air-conditioned basement with its five-car garage, wine cellar and staff apartment.

Up on the second floor is the sprawling master suite with its breathtaking floor-to-ceiling glass walls, a private spa, dressing rooms and expansive terraces offering incredible views toward the port of Palma and the blue Mediterranean. This floor also features three more ensuite bedrooms.

A lower, adjoining building—reached via a Bond-style tunnel—features a huge space dedicated to health and wellness. It comes with two large heated pools on its rooftop, a well-equipped gym, a sauna and spa with its own indoor lap pool.

A stunning, feature of the smaller of the rooftop pools is its glass sides which lets swimmers gaze down into the spa area below.

While that levitating swimming pool floor is designed for James Bond-style helicopter landings, its Burmese teak flooring makes it a perfect dance floor or outside entertainment area.

In addition to all this is a third building that’s the separate, and self-contained, 2,200-square-foot two-storey guest house with living room, kitchen, terraces and three further bedrooms.

Inside, the glamour is sleek and chic. Photo: Courtesy of Engel & Völkers

The often volatile Spanish luxury property market has seen Villa Chameleon struggle to find a buyer since its completion almost eight years ago.

Today’s asking price represents a price drop of a non-trivial 10 million euros, or around £8 million.