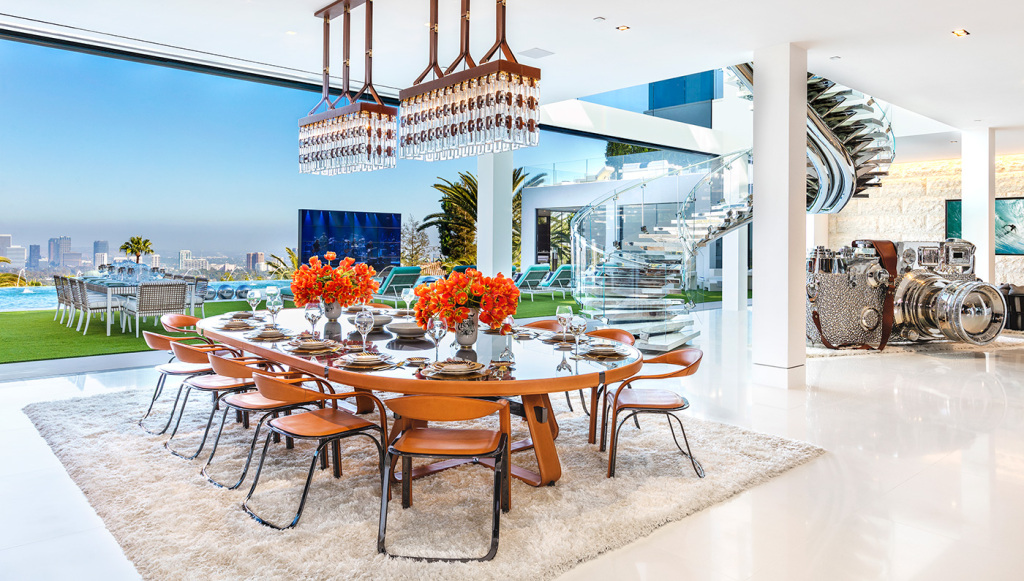 From the cave dwellers of ancient times to the city denizens of today, humanity has long looked to the structures they reside in for shelter, warmth and community. At their core, homes are a reflection of the people who choose to live there. And at the top of the market, these homes display unparalleled artistry and innovation.

We researched the top listings around the globe to discover what features set homes apart from the competition, and what luxury buyers are looking for today. At the ultra-high end, projects are sometimes kept hush-hush—perhaps because of privacy concerns, perhaps as an effort to only market to buyers with deep enough pockets. Case in point: Representatives for a handful of listings asked that they be kept off the list. Other architects and developers, however, are eager for their passion projects and state-of-the-art spec mansions to be discussed freely in order to find the right buyer.

Here’s an inside look at the properties asking top dollar around the globe.

Space is at a premium in densely populated Hong Kong, so it’s no surprise that a sizable single-family home in the Asian hub tops the list of priciest pads worldwide. Built in 1991, the two-story home on Middle Gap Road is equipped with four bedrooms, four full baths and one half bath. In the backyard, a circular swimming pool overlooks a canopy of verdant parkland. Few details have been released about this behemoth beauty, so you might just want to hop on a plane and go see it for yourself.

Overlooking the sparkling blue bay of Cannes in the South of France, fashion designer Pierre Cardin’s Bubble Palace is an architectural anomaly composed of interlinked, bubble-shaped pods. Designed by Hungarian architect Antti Lovag, the terra-cotta-colored estate is reminiscent of the caves our ancient ancestors lived in—with some much-needed modern perks like a waterfront swimming pool and a 500-seat outdoor amphitheater that overlooks the bay.

Spread across nearly 13,000 square feet, the imaginative estate (which the American edition of Robb Report previously called “the architectural equivalent of a Dr. Seuss drawing”) features 10 bedrooms and seven baths. And, thanks to the unique design footprint, circular rooms and swooping ceilings take the place of traditional square-shaped rooms with right angles. Not surprisingly, the quirky compound has played host to events like a Dior fashion show and a James Bond 40th birthday bash.

Sun-drenched beaches and picturesque coastal villages have long made the South of France a top destination for ultra-rich buyers. Set on 35 acres on the coast of Saint-Jean-Cap-Ferrat, Villa Les Cèdres displays the provenance and rich architecture that France is known for. Built in 1830, the 18,000-square-foot mansion is equipped with 14 bedrooms.

In the 1800s, the property was a working olive tree farm, and 300-year-old olive trees still grace the grounds. A bronze statue of Athena stands guard over the palatial property, and curving roads flanked by palm and cedar trees lead to the imposing abode. Inside, period amenities (think chandeliers, French doors, regal sitting areas, and 19th-century portraits) create a rich, timeless scene. The wood-panelled library is home to more than 3,000 books, including a 1640 edition of a botanical codex that is now worth its weight in gold. (Furnishings can be purchased for an additional price.)

When it hit the market last August, the Chartwell Estate in Bel Air, California., became the most expensive listing in the United States (a distinction it still holds to this day). Set on a 10.3-acre lot with verdant hedges and manicured gardens, the 25,000-square-foot main residence was originally built by architect Sumner Spaulding in the 1930s. Influenced by 18th-century French neoclassical architecture, the limestone-clad property holds 15 bedrooms and 18 baths.

Classic entertaining spaces abound throughout, from a period-panelled dining room and state-of-the-art wine cellar to a ballroom and formal salon. The grounds also include a Wallace Neff guesthouse, tennis court, 75-foot swimming pool and covered parking for 40 cars.

If the house looks a bit familiar to you, it might be because it served as the Clampett family’s mansion in the popular 1960s television show The Beverly Hillbillies. It was later purchased by Univision chairman A. Jerrold Perenchio, who oversaw a multimillion-dollar renovation that restored and modernised the residence.

Upon hitting the market in 2014, Odeon Tower Sky Penthouse made headlines for its eye-popping price tag and remarkable architecture. The five-story penthouse, which is perched atop a skyscraper on the Mediterranean coastline, features floor-to-ceiling glass walls that offer 360-degree waterfront views. The sleek, modern interiors were designed with entertaining in mind, from multiple kitchens to alfresco sitting areas.

Spread across 35,500 square feet, the sky palace boasts five bedrooms and five baths. But one of the most impressive features is a waterslide that transports residents from a glass-encased dance floor to an infinity swimming pool overlooking the shimmering blue waters of the Mediterranean.

If the wide-open wilderness is more appealing to you than a city compound, Hawaii’s Molokai Ranch could be the perfect purchase. Encompassing around 35 percent of the island of Molokai, the approximately 55,575-acre expanse shows off more than 20 miles of craggy coastline, sun-kissed beaches, tropical rainforests, sea cliffs, nature preserves and pastureland. There’s a 1200-acre working cattle ranch as well as two golf courses and a hotel.

Positioned on the western side of the island, the ranch is located near Hawaii’s colourful coastal reef system. And, Honolulu is just a 30-minute flight away. The ranch has received plenty of attention in the past, including from Facebook CEO Mark Zuckerberg, who reportedly considered buying the property before ultimately opting for acreage in Kauai.

Proving that everything really is bigger in Texas, Sandow Lakes Ranch encompasses nearly 32,000 acres in the Lone Star State. Verdant green pastures and protected marshes and wetlands will help buyers truly feel at home on the range. An array of wildlife and waterfowl dwell in the area, and the quaint, historic community of Rockdale is within easy driving distance. As an added bonus, the property comes with water and mineral rights.

Though the ranch may feel remote, you don’t have to go far for the finer things in life: The grounds include a two-story pub, a nine-hole golf course, a dog kennel, a chapel, an art gallery, and a private airport. Entertain guests in the 33,000-square-foot main house (which has a library, movie theater, and wine cellar), or step outside to watch the sunset.

Outside, an 85-foot infinity pool overlooks a hydraulic TV screen and an outdoor pavilion with a bar. There’s also a Hobie 16 catamaran, a Bell 222A helicopter, and a US$30 million auto gallery with a Bugatti Veyron, a Pagani Huayra, and a host of other supercars and motorcycles.

Nestled into the Engadin valley near St. Moritz, Lonsdaleite Estate offers panoramic vistas of the snow-dusted Swiss Alps. The seven-level home was built into the side of a mountain in a showstopping display of engineering and design.

On the lower level, an underground lake is lit by 178 floating Swarovski-crystal candles. There’s also a wine cellar, cinema, spa (with a Himalayan salt room, sauna, and hammam), ski den with a private chairlift and direct slope access, and six-car garage with a turntable.

Located next to the US$188 million listing in Bel Air, 908 Bel Air Road is a gargantuan glass-sheathed estate developed by Los Angeles plastic surgeon Raj Kanodia. Spanning nearly 34,000 square feet, the nine-bedroom spec home boasts floor-to-ceiling walls of glass, a Portuguese limestone facade, and a floating staircase. A double-height entry sets the stage for the multilevel manse, which includes a 2,000-bottle wine cellar, a wellness center, and a catering kitchen. The outdoor amenities are equally inviting: Pick fresh produce for dinner from the herb and vegetable garden, fire up the pizza oven for a late-night snack, or relax by the waterfall, cocktail in hand.

Built in 1988 by Aaron and Candy Spelling, the Manor is a 56,000-square-foot oasis set in the heart of Holmby Hills, Calif. A winding driveway leads to a circular motor court that can accommodate up to 100 cars. Set on a nearly five-acre lot, the glamorous Old Hollywood–style abode shows off Italian limestone, 30-foot ceilings, and regal chandeliers.

Seven bedrooms and seven staff bedrooms anchor the estate. From the formal living room to the library, there are plenty of spaces to retreat to for long conversations or quiet study. Should you prefer a more boisterous evening, head to the billiards room, game room, wine cellar and tasting room, or bowling alley. After you’ve tried your hand at one of the activities, cool down in the beauty salon, which is outfitted with masseuse and tanning rooms.

Jule Pond displays quintessential Hamptons charm on a grand scale. Positioned on a 42-acre lot, the estate shows off the largest ocean frontage in the Hamptons (nearly 1,300 linear feet) as well as a 20,000-square-foot main house. Originally built for Henry Ford II and his family in 1960, the renovated residence retains many of its original features, from Italian marble fireplaces and molded ceilings to chandeliers and French parquet doors.

With 12 bedrooms (including two roomy master suites), 12 baths, a game room, and reception and recreation areas, the light-drenched lair can effortlessly transition from summer house to year-round retreat. Outside, there’s a 60-foot swimming pool and spa, an outdoor kitchen, tennis and basketball courts, and a meditation garden. Private pathways lead to a quarter-mile of beachfront facing the frothy blue ocean.

Discovery Channel founder John Hendricks is selling his nearly 7,000-acre West Creek Ranch, which straddles the border of Colorado and Utah. Spread across more than 22,000 square feet, the Southwestern-style main residence includes eight bedrooms and eight baths. And though the four-level home may be in the middle of the country, you won’t lack for activities—there’s a chef’s kitchen, art studio, game room, study, and gym.

Outside, blue skies kiss red rocks near a sizable swimming pool, and an observatory with a rotating copper dome looks to the star-speckled heavens. All around, red rock canyons and cliffs stretch on as far as the eye can see.

Despite being located in one of the most expensive zip codes in the United States, the Wallingford Estate still stands out from the A-list competition. Set on a five-acre promontory overlooking Beverly Hills, Calif., the palatial property was envisioned by Los Angeles spec developer Gala Asher (who previously sold a US$100 million home on Carolwood Drive to Detroit Pistons owner Tom Gores in 2016).

A hedge-lined, gated entrance leads the way to the two-story abode, which offers around 38,000 square feet of air-conditioned living space. The 12-bedroom manse has something for everyone: There’s a 155-foot infinity-edge swimming pool overlooking the surrounding canyons (reportedly the largest ever built in the Beverly Hills area), a chic living room with a fireplace and sliding glass doors that lead to a deck made for lounging or sunbathing, and a lush yard where residents can host soirees that will be the talk of the town.

An indoor sports facility showcases a boxing ring, a weights and cardio gym, basketball and pickleball courts, a glass viewing gallery, a sports bar with a video wall, and indoor and outdoor lounges where residents can gather with guests after a friendly competition. Additional amenities include a 5,000-square-foot guest penthouse, a caretaker’s house, a 10-car garage, and a two-bedroom guardhouse.

The Biggest Mansion In Queensland, Australia Is Up For Sale