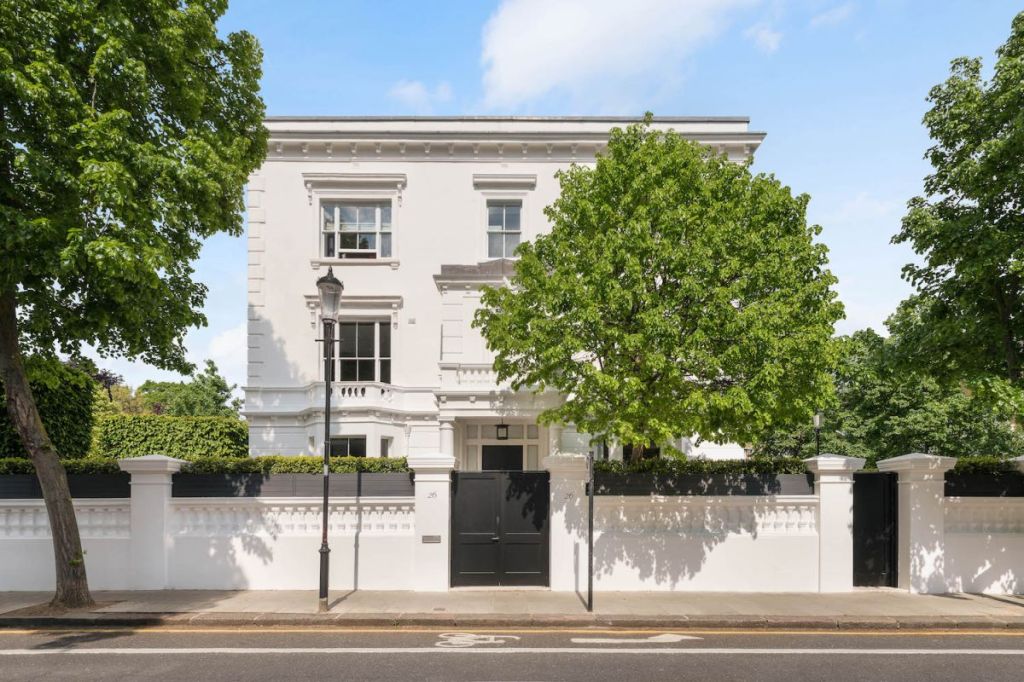 The stately London mansion once owned by fashion icon, perfumier and filmmaker Tom Ford, and with the designer’s stunning interior touches left intact, has just hit the market for £13.3 million.

While clean and elegant on the outside, the inside of this four-story Victorian is all stainless steel, black glass, striated Macassar wood, and jet-black wall paneling. Sexy doesn’t even come close.

Ford, who’s credited with reviving the fortunes of Gucci and YSL before launching his own brand in 2006, is believed to have purchased the house in 1997 for £2.55 million.

His exhaustive makeover saw the interior gutted and the Texan designer’s own inimitable style reflected in every room. Back then, the 3,700-square-foot house featured just two bedrooms.

For Ford, the home’s considerable appeal was no doubt its coveted location in the Boltons, a swank enclave of just 30 sprawling Victorian houses in Chelsea. It’s not clear how long Ford and his longtime partner Richard Buckley lived in the house. All we know is that it was listed in 2009 for £8.5 million. We suspect that some time between 2009 and 2012, the house sold in an off-market deal, with the new owner adding a third bedroom, but leaving all the fabulous Tom Ford design cues in place.

Eventually the home was sold in 2014 for £12 million, with the new owner again electing to leave the Tom Ford design features intact, an homage to the longevity of designer’s creative talents. Today, imposing black double gates, under the watchful eyes of a barrage of security cameras, lead to the home’s white stucco-style facade. While photos might give the impression of the double-fronted mansion being free-standing, it’s actually joined to a row of similar-style homes at one side.

Steps lead up to the single front door and into an entrance lobby with its stunning, alabaster marble open staircase edged with mirror-finished black glass walls. To one side there’s a black-walled, black sofa-filled reception room, on the other an elegant wood-panelled dining room. Large, floor-to-ceiling windows in the reception room look out on to a quiet, serene courtyard that’s hidden away behind towering trees and hedgerows.

Back inside, stairs descend to the lower ground floor—don’t call it a basement—with its stainless steel and stark white kitchen, ensuite bedroom, compact gym, steam room and wine cellar. Now take the stairs—there’s no elevator in the residence—to the second level and there’s a gorgeous Mad Men-style Macassar wood-panelled study on one side and a cozy, grey-panelled guest bedroom on the other.

You’ll find the true Tom Ford style, however, in the third-floor primary suite with its jaw-dropping bedroom with three walls and even the ceiling, lined in matte stainless steel. It might seem a little strange, sleeping in a steel box, but it works. Across the hallway is the spacious, though uninspiring all-white master bath and the huge dressing area with endless closets, no doubt once filled with those trademark Tom Ford black suits and crisp, white dress shirts.

Keep heading up the staircase, and you’ll step out on to the vast rooftop deck with views of the London skyline. Charles Olver, partner and head of sales for listing broker Knight Frank, says the interior of the house gives “an overall sense of being immersed in an exquisite piece of fine art.”

“With an interior created by none other than one of fashion’s biggest creative names, Tom Ford, perhaps you’d expect nothing less. But still prepare to be blown away,” he adds. The home sits in one of London’s best districts. Photo: Alex Winship/Knight Frank