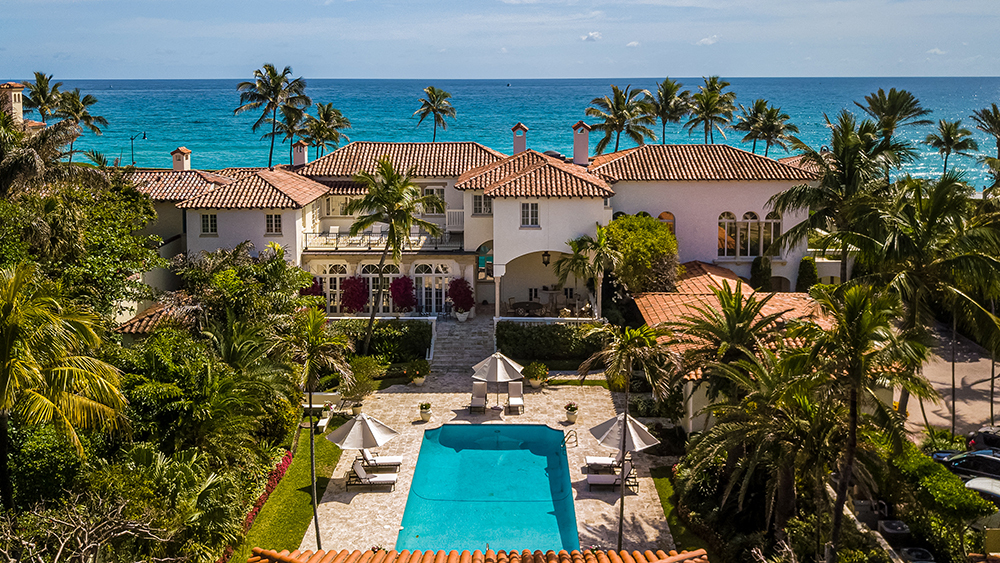 When John Lennon spent a few days in Palm Beach, Fla. back in 1974, he told a local newspaper reporter: “I really like it here. I really don’t want to leave Palm Beach. I’d like to own a piece of it.”

Strange as it may sound, that’s exactly what the former Beatle did. In January 1980, he and wife Yoko Ono paid $725,000 for the landmark oceanfront compound known as El Solano on Palm Beach’s billionaire row, South Ocean Boulevard.

The plan had been for the couple to use the massive Spanish-style mansion, designed by famed 1920s architect Addison Mizner, as a retreat from grueling New York winters. They had big plans to renovate the iconic property.

Tragically, just 11 months later, Lennon was murdered outside his apartment at the Dakota building in Manhattan’s Upper West Side. While Ono went on to complete the restoration, she sold the mansion in 1986 for $3.15 million.

Now, for the first time since 2016, El Solano is back on the market with around £37.5 million asking price.

It’s currently owned by John and Cindy Sites, who bought the seven-bedroom, 14,000-square-foot estate four years ago for just over $23 million. John Sites, 68, is a former EVP at failed investment giant Bear Stearns and currently a partner at Wexford Capital. His wife founded the Go Figure barre fitness chain.

Set on a lush 1.3-acre lot with 180 feet of prime Atlantic oceanfront, the estate has no shortage of high-profile neighbours. Next door, author James Patterson owns a 20,000-square-foot compound, crooner Rod Stewart has a 17,000-square-foot spread close by and less than a mile away is President Trump’s 62,500-square-foot Mar-a-Lago club.

Built in 1925, the estate was originally owned by Mizner himself, whose Mediterranean-style designs defined the “look” of Palm Beach. The architect quickly sold El Solano—named for Solano County, in California where he grew up—to yacht-racer Harold S. Vanderbilt who lived there a number of years.

Gates open on to the no-parking-allowed South Ocean Boulevard from the property’s narrow driveway and the main home’s side entrance. Set on three levels, the home has seven bedrooms, nine bathrooms, a huge 40-foot-by-25-foot grand salon, a library and spectacular oceanfront dining room.

On the expansive grounds, hidden behind towering hedgerows are two swimming pools—one for sunrise, the main one for sunsets—a tennis court, beachfront cabana, a two-story pool house with guest suite, and a three-car garage, where Lennon parked his much-loved red Cadillac.

“El Solano is a true oceanfront palace with all the grandeur you would expect of the 1920s,” says Christian Angle, of Christian Angle Real Estate who holds the listing.

That grandeur includes many of the home’s original ornate architectural details, like the exquisite hand-stenciled wooden ceilings, the elaborate crystal and wrought-iron chandeliers, its grand stone and wrought iron staircase, and carved stone fireplaces.

The huge, oceanfront master wing covers most of the upper level and features a 30-foot-by-18-foot bedroom and an adjoining study that leads to a sitting room. Here there are separate bathrooms, an office and huge walk-in closet, with everything decorated in soft pastels.

With an uninterrupted view of the ocean from the master suite, it’s easy to imagine Lennon opening up the curtains every morning and singing to himself a few verses of that Beatles classic “Here Comes the Sun.”

The veranda off the pool house. Photo: Andy Frame

The pools and lawns are just steps from the Atlantic. Photo: Andy Frame