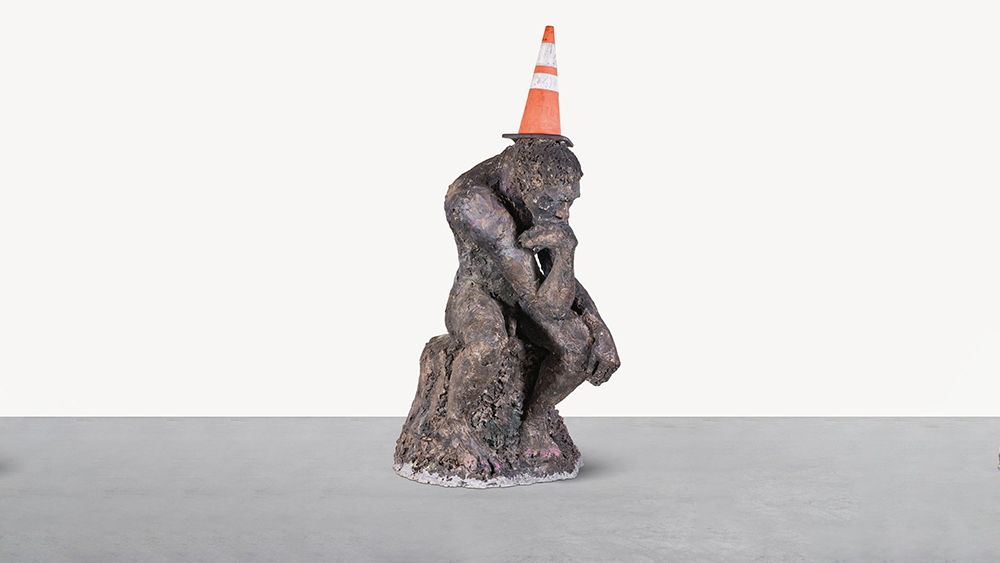 The irreverent, anonymous Banksy has been hot on the auction block lately, and on Tuesday, Sotheby’s in London will test his market mettle once again, offering a 2004 sculpture by the artist called The Drinker. However, there is a wrinkle: another artist is making the rather unusual claim that the work was stolen from him. The auction house has rebuffed the allegation.

British artist Andy Link, who helms the self-described “arto-politico humorist” group Art Kieda, says that he “kidnapped” The Drinker, Banksy’s wry take on Auguste Rodin’s The Thinker, when it appeared in central London in 2004. (Link reportedly asked Banksy for a ransom, and the artist was willing to give “£2 towards a can of petrol” to set the sculpture on fire.)

Link held onto The Drinker, but he claims it went missing from his garden in 2006, and that he reported the theft to police at the time of its disappearance. The Guardian reports that he is contesting the upcoming sale of the 6-foot-tall work at Sotheby’s in London, where it is estimated to sell for between £750,000 and £1 million. Its auction listing says that the anonymous seller purchased the work from dealer Steve Lazarides in 2014.

“I do not understand how Sotheby’s can sell this when I have such proof,” Link told the Guardian. “Lawyers are asking from £18,000 up”—”just to take the case on, and I’m a struggling artist, just a working-class bloke.”

Sotheby’s has said that it “consulted both the Metropolitan Police and the Art Loss Register” to verify that the seller could legally put the sculpture up for sale at the auction house. Catalogue notes accompanying the lot on Sotheby’s website reports that the work was “mysteriously retrieved from Art Kieda’s lock up in an anonymous heist,” and that it was acquired by its present owner in 2014. The Metropolitan Police have said that they do not have an active investigation into the issue.

Banksys have been performing well at auction houses recently. Last month, a new auction record was set for the artist, when his 2009 painting Devolved Parliament sold for £9.88 million at Sotheby’s in London. And in day sales in New York last week, two works by the street artist sold well beyond their estimates: LAUGH NOW ON PALETTE (2005), sold for around £590,000 at Sotheby’s, and This Is Not a Photo Opportunity CP/16 (2013), went for around £165,000 at Christie’s.

Perhaps Banksy’s most notable appearance on the auction block occurred last year, when one of his works self-destructed at Sotheby’s in London right after selling for over a million.