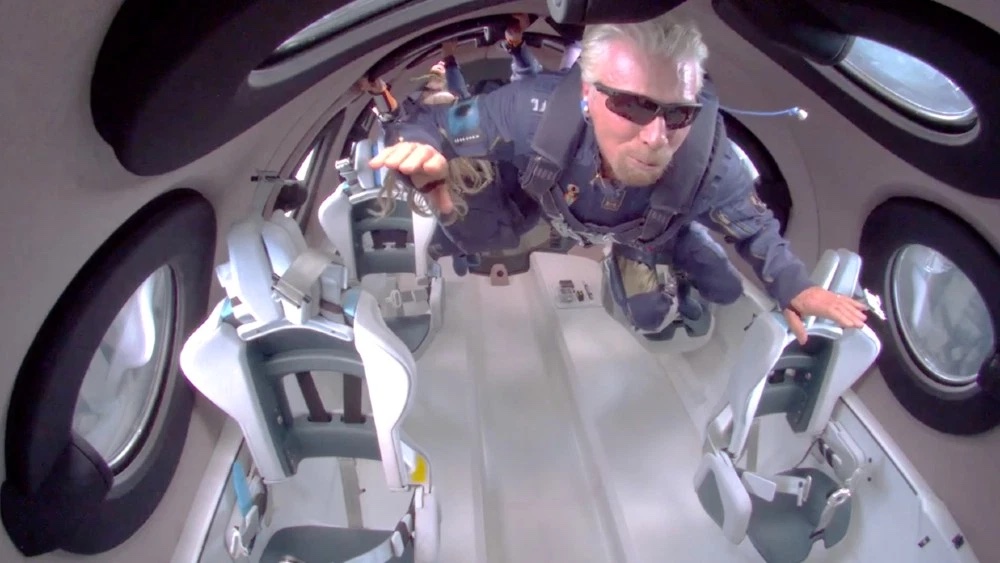 “To all of you kids down there, I was once a child with a dream looking up to the stars,” said Sir Richard Branson yesterday aboard Unity22, floating around the cabin. “Now I’m an adult on a spaceship, looking down to our beautiful, beautiful earth. To the next generation of dreamers, if we can do this, just imagine what you can do.”

Branson finished the message with a big “Yay!”

Yesterday’s successful launch of Unity22—the 22nd launch of a Virgin spaceship—was historic in the sense that it carried the first of three competing billionaires into space, but it also marked the official beginning of commercial space tourism. Branson also announced a new raffle on Omaze.com that will provide two free seats on an upcoming Virgin Galactic flight.

“This is a self-fulfilling way to get people who couldn’t afford to go to space up there,” he said on stage, post-flight. “Any background, any gender, from anywhere, can have the dream of going into space. This has opened a new era of commercial space tourism.”

Yesterday’s flight at Spaceport America in southern New Mexico, about 180 miles south of Albuquerque, was delayed by 90 minutes due to high winds, but went off without a hitch on a bright sunny morning. To get off the ground, Unity22 was carried by a mothership, Eve, which lifted it to 50,000 feet, and then the smaller aircraft—about the size of an executive jet—dropped down and fired its rocket engines.

Unity22 then went vertical to an altitude of about 50 miles, past the edge of the Kármán line, recognized by NASA as the boundary between Earth and space. As the aircraft cut its engines and turned upside down to see the Earth through the large, oversized windows, the astronauts experienced three minutes of weightlessness. There, surrounded by three other Virgin Galactic chiefs, Branson gave his message to kids around the world dreaming about space travel. 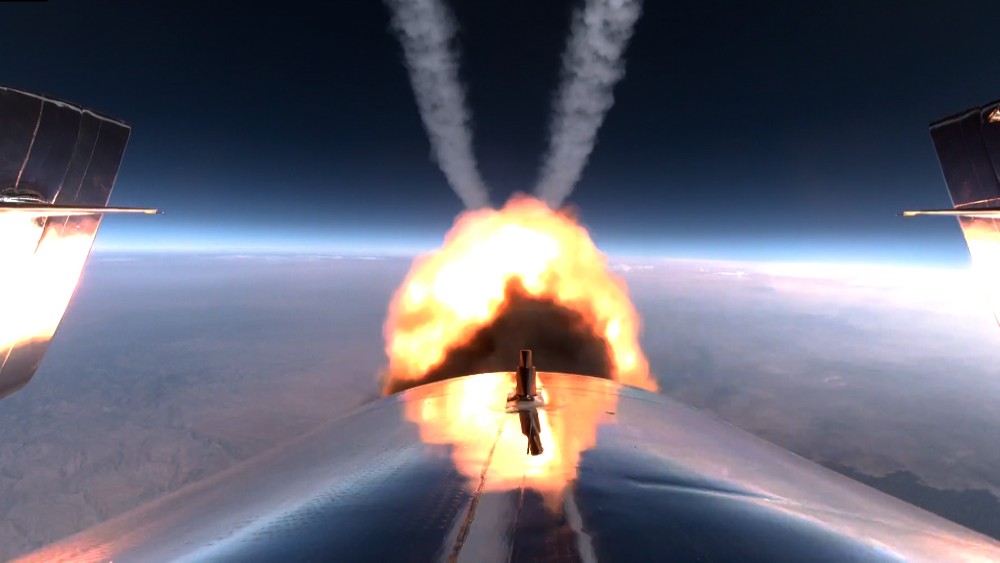 The rocket engines roar after the space aircraft detaches from the mothership at 50,000 feet. Courtesy Virgin Galactic

The aircraft then began its rapid descent, thanks to gravity, and re-entered Earth’s atmosphere. Unity22 essentially became a glider, landing safely on the Spaceport’s runway after its 90-minute space odyssey.

“It was beyond my wildest dreams,” said Branson, who went up ostensibly to monitor customer experience and make recommendations for improvement. “To go to Mach 3 [2301 mph] in seven or eight seconds and then see those breathtaking views of the earth. I will devote the rest of my life to this.”

It has been a long road since 2005 when then New Mexico-governor Bill Richardson and Branson shook hands on a stretch of desert in New Mexico, announcing that Richardson’s then-fantastical Spaceport America idea was going through. Branson forecasted that he would have a commercial space-flight operation within two or three years. Seventeen years later, following a global recession and a Virgin Galactic accident in 2014, his dream finally came through. 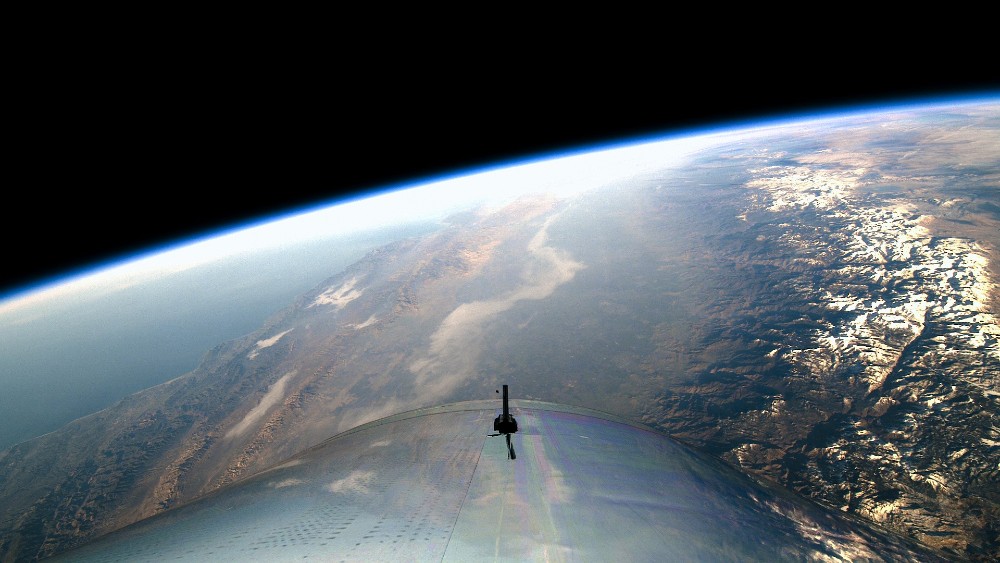 On the ground, a large crowd of employees and fans, and an adjoining group of press in an area on the far edge, listened to a DJ spin and watched a livestream of the flight hosted by Stephen Colbert. After the flight landed, singer Khalid, originally from nearby El Paso, gave a live performance. The livestream lionized Branson at every turn, but it was clear by the end that he and his fellow astronauts—Beth Moses, Virgin’s chief astronaut instructor, Colin Benett, lead operations engineer, and Sirisha Bandla, vice president of government affairs—had been moved by the experience. At the press conference, they all pulled out mementoes—mostly pictures of family and loved ones. 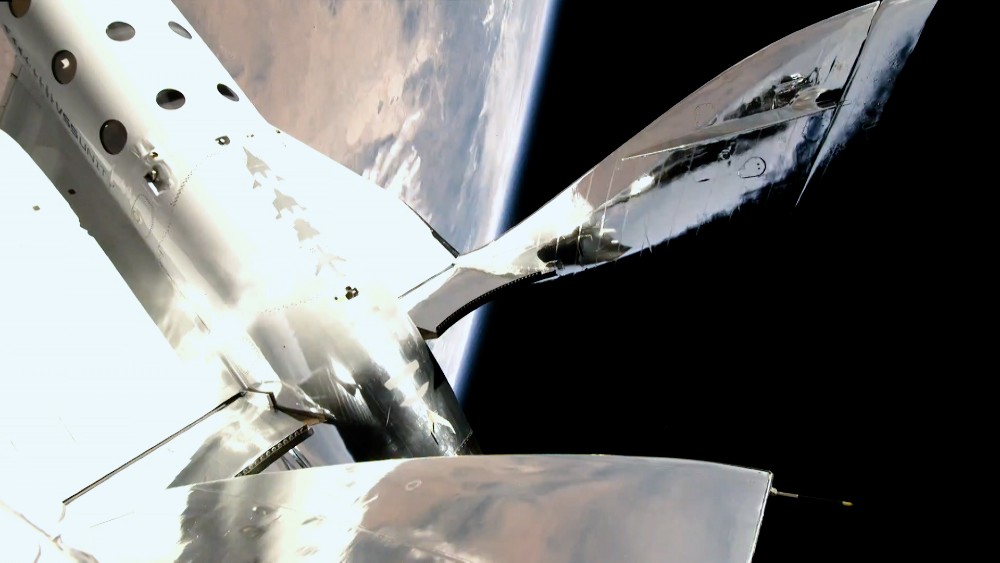 A view Unity22 in space with Earth in the background. Courtesy Virgin Galactic

“It was truly phenomenal the second time,” said Moses, who had flown on a 2019 space flight. “It goes deep into your soul.”

The flight also marks the official space race among the three billionaires. Branson insisted in the post-flight press conference that it was never a race. He said Elon Musk, founder of SpaceX, had shown up in his kitchen at 3 am the night before to wish him luck. “We also wish Jeff the best for his flight and crew,” said Branson.

A Virgin Galactic executive at the event said that this will be the first phase of Virgin’s commercial space tourism, adding that the second phase would involve the eventual “democratization” of space travel by bringing down the costs. Virgin is working with the Italian government to build a space port for the European market.

Blue Origin is scheduled to launch its spaceship on July 20, with brothers Jeff and Mark Bezos on board, and SpaceX said its orbiting ship would fly by the end of this year. Space Perspective has also entered the commercial space race, with a much slower space balloon that will rise 100,000 feet above the Earth.

Rick Homans, then secretary of economic development for Bill Richardson, was thrilled with the success of Unity22. “One of the big testaments to its success today was that Spaceport America was supported by three successive governors,” he said. “When we first announced it, they said we were crazy. There were so many times it could’ve been derailed but it kept going thanks to political courage. This is just the beginning of a new era.”

Richard Branson To Become the First Billionaire in Space This Weekend