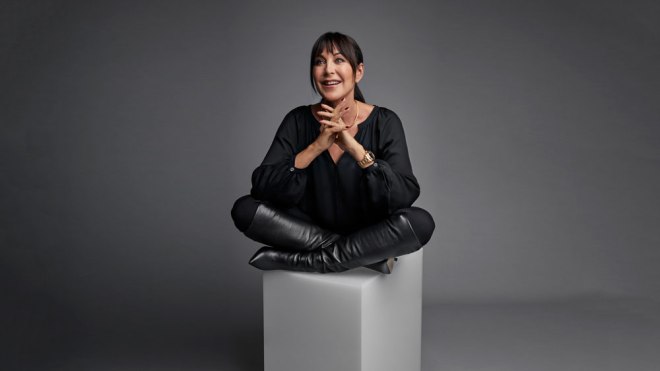 When it comes to stepping up, designer Tamara Mellon has walked the walk. Mellon cofounded the iconic shoe brand Jimmy Choo in 1996, and, in the process, redefined the luxury shoe market and our obsession with stilettos by being one of the first designers to dress Hollywood celebrities for the red carpet. Today she’s changing the playbook once more.

Supporting women is paramount to her new company’s ethos. With her namesake Tamara Mellon brand, launched in October 2016, she’s created a women-led, direct-to-consumer e-commerce platform that is designed to empower women and speak directly to the customer and her needs. “When I founded Jimmy Choo, I had no idea what I’d face in business. I was twenty-seven years old,” Mellon recalls. “After I sold Jimmy Choo and left, I wanted a new company, a new culture, a new voice that supports women. For the first time, I have a female CEO.”

Mellon and her team engage actively on the website, listening to feedback from customers. This direct-to-consumer model benefits the customer not only creatively but financially. By cutting out the wholesale margin, she’s able to offer her signature luxury for considerably less. For example, Mellon’s black suede Charge ankle boot costs $595. A similar boot at Jimmy Choo fetches $895. As a result of tighter margins, Mellon never discounts her shoes except on Equal Pay Day (April 10), when she offers women a 20-percent discount—a number that represents the gender pay gap. “I learned at Jimmy Choo that men working for me were earning more, and I was the founder of the company!” Mellon says. “The pay gap was something we want to talk about publicly. Without awareness you tend to get this feeling that you’re going it alone.”

It’s this sense of community that informs every decision. The shoes, the website says playfully, are for “leaning in, climbing ladders, and shattering ceilings.” Now Mellon’s doing what she can to close the pay gap and ensure that women are supported in industry. “We use the company as a platform to speak to our customers and it’s really resonating,” she says, “particularly with women who work in the C-Suite. They identify a lot.”

“I learned at Jimmy Choo that men working for me were earning more, and I was the founder of the company!

The pay gap was something we want to talk about publicly.

Without awareness you tend to get this feeling that you’re going it alone.”

To promote Breast Cancer Awareness, Mellon donated 100 percent of proceeds on National Mammogram Day to the Dubin Breast Center at Mount Sinai. This past Mother’s Day, she created “Friends with Benefits” to call out sister companies, including Estée Lauder, Patagonia, Spotify, and Netflix, who have gone above and beyond to offer benefits for working mothers. Mellon says, “As a small start-up, we looked to big companies to see what they were doing to learn from them. We also know that working together is going to have the largest impact.”

Other fundraising initiatives this past year have included a partnership with TIMES UP as well as designing a limited-edition red velvet sandal to raise money for women’s shelters through the Elton John AIDS Foundation.

But is stepping up and leaning in a good business model? New Enterprise Associates, with help from Quadrille Capital, is betting on it with a US$24 million Series B round infusion of financing for the company to support new hires and product development as well as Mellon’s platform for women’s rights and equality. “We want to build a culture that supports working women in all areas,” Mellon says. “When women make money, they give more back to their communities. Children are better off. It all comes around for a greater good.”