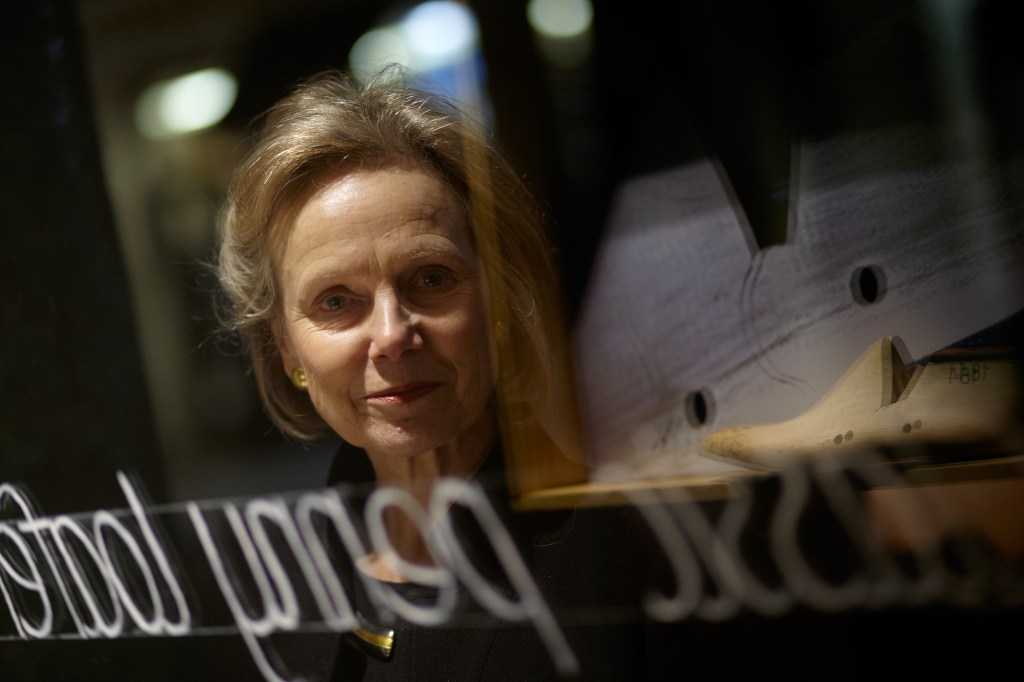 Do you recall when and how you first began to appreciate top-quality footwear?
When I worked in Paris, I could afford to buy few items but like other Parisian women, I saved to buy outstanding quality. Curiously, the cemented sole construction of women’s shoes did not have the same durability as Parisian clothing. It was not until I met [former Edward Green custodian] John Hlustik who was a shoe designer and had recently purchased the company that I experienced a similar level of quality, comfort and durability in shoes.

I keep hearing conflicting opinions re. the ‘Not brown for town’ adage – what’s your take?
Several years ago, in the City of London, black was the inevitable choice for business – but in Milan, for example, it was quite different. In today’s landscape there are numerous options for those who seek timeless elegance. A man who is interested in sartorial matters may well take his cue from internet discussions, rather than from the code of the Square Mile.

What impact did John have on the company?
John Hlustik studied shoe design at Arsartoria in Italy and subsequently held design studios in London, Kilmarnock and Florence. But having purchased Edward Green – a small, unrecognised Northampton shoemaker – in 1982, he decided to focus on building his own company, rather than design for others, with an emphasis on uncompromising quality and the addition of a certain continental élan. It is surely the influence of his Italian training which also led him to create the process of antiquing as a means of distinction from the other, far larger English shoemakers who were primarily all making in black.

What, for you, defines “luxury” within the modern shoemaking milieu?
We focus on making shoes of unsurpassed quality. As one of our craftsmen wrote above his bench, “We make the best shoes we can.” There’s an inner confidence that comes when you step into well-made shoes — this itself is true luxury.

Leather uppers being cut by hand

What brands do you admire in the broader luxury milieu?

In terms of other individual British companies like Edward Green, Holland & Sherry are renowned woollen merchants and cloth weavers in the Yorkshire, where they have been producing the best cloth since 1836. Their fabrics are the choice of the cognoscenti worldwide. Emma Willis is a more recent arrival, making shirts in superlative cottons and linens. Ettinger make excellent leather accessories in the UK. Begg & Co. make the most amazing scarves in Scotland, combing cashmere with teasels so it shimmers like velvet. These are just a few, relatively small independent British firms covering a wide field of quality manufacturing and who seek not to be the biggest but the best.

What future do you see for shoe design as new, younger consumers become Edward Green customers?
There will always be a place in a man’s wardrobe for an impeccable black Oxford. It’s such a simple and elegant shoe and for many occasions it just can’t be bettered. But lifestyles and codes of dress change and now many people can be more casual and more expressive in how they dress in their day to day lives. That’s true for both younger and older consumers. Boots and loafers have both grown in popularity and when you visit a menswear fair like Pitti in Florence, you see why. Our Galway boot, for example – originally a hunting boot in country calf with veldtschoen construction – is now just as frequently made on an elegant last in a mix of black calf and suede. Style is no uniform, and by understanding that we can keep tweaking and re-interpreting our models in ways which maintain relevance. New leathers, new soles, design tweaks — but always executed for the discerning eye

The Galway boot – no longer just a hunting staple

Who – dead or alive – are your greatest inspirations?
My grandmother was a very special and driven woman and I’m sure that I’ve drawn on her example through the years. Her husband, my grandfather, died at a young age in an industrial accident on a ship and it was left to her to bring up four boys alone. She had a singular determination and became a school governor when few women were even allowed to work. I, myself, left school 50 years ago when women were all too frequently side-lined in the workplace, but Granny Freeman’s example showed me the way. When John Hlustik died suddenly in 2000, I looked to her resilience and returned to Edward Green the next morning.