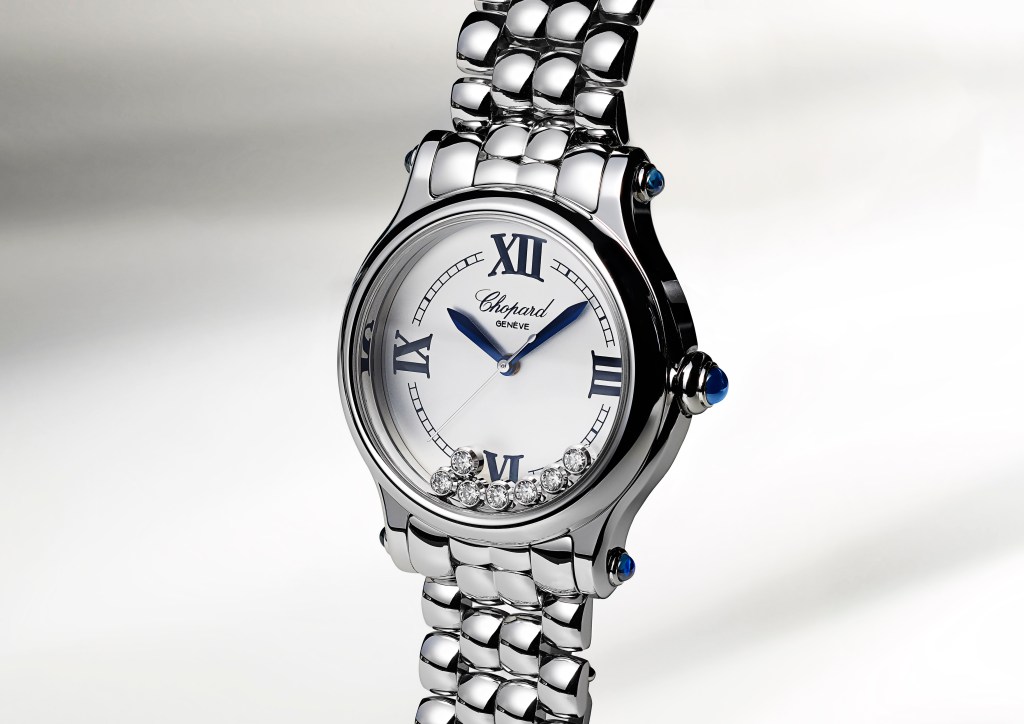 Given Chopard’s long-standing passion for cinema – the brand crafted the Palme d’Or trophy, and has since 1998 been partnering with the Cannes Film Festival – it’s perhaps no surprise that Julia Roberts has been chosen as the face of the new 1,993- and 788-piece limited-edition re-releases of the Happy Sport watch, first released by Caroline Scheufele, Artistic Director and Co-President of Chopard, back in 1993.

Scheufele has described the Pretty Woman actor – who wore a Chopard ‘Haute Joaillerie’ emerald and diamond necklace at Cannes back in 2016 – as “the only person I felt could covey the spirit that I see in Happy Sport”. The campaign, meanwhile, has been directed by Xavier Dolan, who won the Cannes Jury Prize for Mommy in 2014.

And what of the watches themselves? As the manufacture puts it, the Happy Sport “embodies the countless transformations of an era and epitomises the joie de vivre and free-spirited attitude to which contemporary women aspire”.  Like the watches’ early 90s predecessors, the new iterations feature dancing diamonds and that highly recognisable “pebble-link” bracelet, but there are new innovations too.

Redesigned to have a 33mm-diameter case (in adherence to the principles of the golden ratio), the 1,993-piece Happy Sport The First – that number being a tribute to the year its 28-year-old cousin was released – comes in stainless steel set with a cabochon-cut sapphire, and a glare-proofed sapphire crystal; the variation produced in a run of 788 (Scheufele’s lucky number) is also graced with a diamond-set bezel and a textured mother-of-pearl dial. Both have, as their beating heart, a 148-part Chopard 09.01-C movement with automatic winding and a 42-hour power reserve.

For Scheufele, the steel component of Happy Sport The First, as with the 1993 model they celebrate, is a huge part of the versatility they offer. “In my opinion, steel is the ultimate material for active people – a steel watch is the ideal accessory to play sports, for example,” she tells Robb Report UK. “When I decided to combine these two materials in 1993, it was a premiere in the watchmaking industry and totally unheard of! Even my parents were not absolutely convinced, but I knew women would love the idea of a watch that can be worn throughout an active day the on to an elegant evening.

“When I first presented the Happy Sport concept, I remember our head of workshop telling me that I wouldn’t sell a single one. Almost 30 years later, history has proven me right, confirming that you must always believe in your ideas. At that time, this watch was so disruptive and innovative in its approach to feminine watchmaking that it was hard to imagine how successful it would be. You had to be very visionary! It was the first time that the rarity of diamonds and the sportiness of steel were combined in a watch. It was also the first time that a watch was created and designed by a woman for women right from the start.

The creation of the ‘Dancing Diamond Choreographer’ feature

“I was driven by the conviction that ladies’ watchmaking needed a breath of fresh air. As a woman, I wanted a watch that went beyond the purely functional or decorative aspect. It had to combine both. That’s the spirit of the Happy Sport, an object that can be with me 24 hours a day: chic with diamonds, yet not too sophisticated thanks to steel.”

Versatility, Scheufele insists, is more important in a women’s watch today than ever before, in terms of the cultural zeitgeist. “It’s absolutely essential!” she says. “Nowadays, women have so many facets to their lives – they’re entrepreneurs, mothers, wives and partners, sports enthusiasts, opinion-leaders… Women want it all, and they need every minute of their lives. They don’t want to waste their time changing watches to fit the occasion – they need versatile accessories they can wear without worrying if they are appropriate or not.

The 788-piece Happy Sport The First with its diamond-set bezel and a textured mother-of-pearl dial.

“I come from a generation that has seen women’s place in society evolve as never before. The 20th century laid the real foundations for equal rights and freedoms between men and women, and the latter have acquired power in the family as well as in business and politics. In many countries, there is still a long way to go, but the basic principles are there, and there is a generation of determined women all over the world who are ready to defend their ideals so that each woman can free herself from barriers and live her life in harmony with her own nature.

“Happy Sport reflects these women and their way of life: strong yet precious, sporty yet also very feminine. Also, let’s not forget it’s all about joie de vivre – the happiness one feels when one is free to be oneself. The dancing diamonds that our maison invented sum up this Joie de Vivre instilled by the way the women who wear them move – freely.”